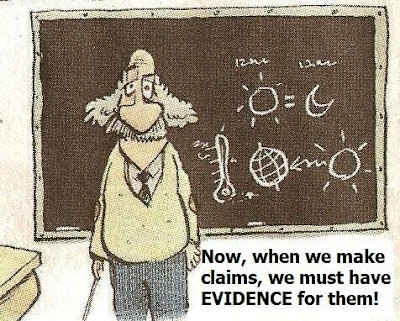 It's time again to re-visit the definitions of atheism and agnosticism, given there remains so much confusion regarding the differences between them. This can easily be seen with just a cursory check of the 'Atheism-Agnostic' forum on the AllExperts site, where nearly 1 in 4 questions has to do with clarifications. Why this should be so difficult to process, I've no idea, but I suspect a large part of the problem is that both definitions have become increasingly muddied by abuse and misuse of religionists.

Thus, when people encounter theist websites, or read theist-written books or literature (not to mention the mainstream press) they often end up manufacturing their own inimitable confusion. What they need is to cooly and calmly sit down, isolate the distinguishing features and process them.

Let's clear the air first as to what constitutes agnosticism, then we shall move on to atheism. Many have the mistaken or misguided conception that agnostics "neither believe nor disbelieve" in a god. In their minds, the agnostic kind of sits on a fence of belief-disbelief never actually falling into one patch (belief) or the other (disbelief). This is cute, and kind of simple to recall (certainly for a simple mind) but false.

To fix ideas here, agnosticism is not a third alternative to theism and atheism because it is concerned with a different aspect of mental affect. Theism and atheism refer to the presence or absence (withholding) of belief in a god; agnosticism refers to the impossibility of knowledge with regard to a god or supernatural being. Since the agnostic posits an impossibility of knowledge he then justifies his recusing himself from any belief based on it.

So, we have these initial distinctions:

1) The pure agnostic disdains any belief in a deity based on an absolute impossiblity of knowledge.

2) The agnostic theist BELIEVES in the existence of God, but argues it's useless to attempt to elaborate any divine nature (e.g. all-powerful, all loving, all knowing etc.) because the knowledge basis isn't there to permit such assumptions.

3) The agnostic atheist asserts all transcendents are unknowable and hence their existence is as well, so belief is impossible since it requires a leap of faith not warranted by reason alone.

Now, we move on to atheism, and the primary aim here is to distinguish the agnostic atheist, from the implicit atheist.

We have no need to make a distinction vis-a-vis the explicit or strong atheist, since we know the strong atheist (mainly based in the late Madalyn Murray O’Hair’s American Atheists) actually denies a God can exist and actively disbelieves in all gods. They are also the ones who puckishly remind "strong Christians" (like the evangelicals) that they simply believe in one less God than they do! (Which is why they sometimes call evangelicals "one more god atheists"). The evangelicals reject all the assorted other gods, from Brahman, to Yahweh, to Jehovah, to Allah, and so do the strong atheists…who also reject the evangelicals’ God!

Now, we focus on the difference between the agnostic atheist and the implicit atheist. The clarifying point here is that the latter withholds belief in a deity pending adequate evidence being forthcoming. He isn't trying to "dodge" anything, and certainly wouldn't be asking for evidence if he regarded a divine entity as linked to "impossibility of knowledge". (Since the basis for evidence inheres in knowledge!) One only asks for evidence if he or she believes there is a knowledge basis to the claim in the first place!

In other words, the implicit atheist places the god claim on the level of a hypothesis to be tested. Now, since he is only the recipient of the claim (not the originator) it behooves the god claimant to provide the evidence for it. The same as if I claimed that a solar flare was imminent within 24 hours at solar latitude 30 degrees and solar longitude 100 degrees. It would be my job to provide the evidence, say using vector magnetograms, gaussian contour maps, UV fluxes, sunspot proper motions, magnetic gradient magnitudes and so forth.

This distinction is extremely important, as it makes clear it is not the duty of the implicit atheist to disprove the theist's claim (including the NATURE of the deity he espouses) but the duty of the theist to prove it, or at least make clear the necessary and sufficient conditions for his entity to exist. If he dodges this, then the implicit atheist is obliged to withhold acceptance of the claim, much like a solar flare skeptic would withhold acceptance of my solar flare prediction if I can't produce the goods to show why or how the flare will occur at such and such time and solar location (the demand for the goods even more severe if I assert there will be also be terrestrial effects - like shortwave blackouts, airplane navigational problems, power grids knocked out etc).

Thus, withholding of belief in such circumstances as I have articulated is not only totally rational and logical but incumbent on the serious thinker! If one willy-nilly accepts any claim rendered without asking for supporting evidence ("Extraordinary claims require extraordinary evidence") he does himself an enormous intellectual injustice as well as the claimant. (Since in that case, the claimant is reduced to no more than a clown.) Once again, the intellectual judgment rendered is not for the "idea" or putative entity per se, but the CLAIM made on its behalf.

Note also another distinction above: the difference between withholding belief and simple lack of belief. Clearly, one can have or possess a "lack of belief" even when no claim is made! For example, I can have a "lack of belief" (belief meaning acceptance without evidence) concerning possible 50 foot squids on the bottom of the Caribbean Sea- assuming NO one has made or advanced such an active claim to me. The reason is that a priori I know nothing of such things, and hence my lack of belief is justified by ignorance. (I don't know what I don't know and can't possess a valid belief on what I don't know! Hence, "lack belief") This is NOT the same as acting a fortiori in respect of a claim already made, i.e. "There are 50' long squids at the bottom of the Caribbean Sea" - in which case the CLAIM itself informs me of the hypothesized existence, along with its being made. Therefore, the logical response here is not to insist on "lack of belief" but rather withholding belief. The critical point, again, is that the withholding of belief is not pertaining to the entity per se but the CLAIM made concerning the entity. (Again, since the specific claims can vary wildly. For example, a minimal theist - or Deist- can simply make a claim for a "supreme being" which made the universe and left it, but another -say a fundie- may make a whole laundry list of claims for its entity's interventions, miracles etc.)

This latter is similar in form to a person coming up to me and asserting he has "invisible aliens" in his attic that are starting a colony. As in the squid claim, I expect if he is serious that he has evidence to support it. Now, as he has informed me of the claim (or putative hypothesis) it is his job to prove it to me. In this case, since I have a fortiori knowledge of the existent, by virtue of his claim, my logical response is to withhold acceptance of it until evidence is forthcoming.

These different definitions for sure require a nuanced (and educated) mind to appreciate, since in some cases the differences are subtle and don't fly out of the screen at you. At the very least, a basic understanding of the differences requires a careful re-reading of the blog to get it straight.

But I am confident that if the serious thinker (as opposed to dilettante) considers these differences carefully, he or she will see exactly where I'm coming from. If so, it means they'll be more likely to distinguish agnostics from agnostic atheists and theists, and agnostic atheists from implicit atheists and explicit atheists. Truly, the (misplaced) desire to simply label all athiests as explicit is to ignore discriminating attributes and is as egregious as lumping all Christians together without distinction to their attributes. Would fundies like to simply be lumped as "lapsed Catholics" or "bible believing former Catholics" or whatever? I doubt it.
Posted by Copernicus at 1:50 PM