4 More Years in Afghanistan? You Gotta Be Kidding! 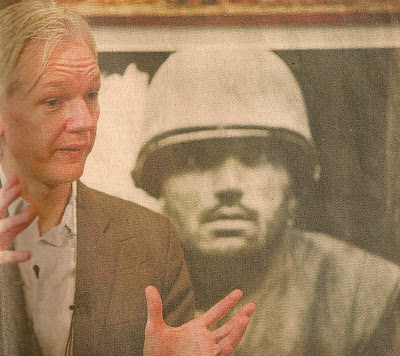 Will Julian Assange of 'Wikileaks' be leaking even more documents if the Afghan quagmire continues to 2014? We hope not, and the reason being we're out so there won't be any more files to leak!


This was the word out in today's Denver Post, and it's enough to make a progressive cringe! First, how the hell is this country going to AFFORD four more years in that rathole - making it the longest war ever in U.S. history? WHERE is the money going to come from?

We've already squandered nearly $560 billion and estimates approach $1 trillion if we stopped in 2011 (the added costs from future medical, psychological care), as Obama had originally promised. (Yes, he did promise, and liberals will hold his feet to the fire on that. If he punks out, and gives in to the military assholes, you could almost make book on him being a one termer. The Left will be so deflated by this on top of everything else: failure to shut Guantanomo, possible punting on the Bush tax cuts, health care weakened by no public option, appointing a Bushite in charge of the DEA when he said he'd go easy on medical MJ, etc. that 9 of 10 will wait out 2012 like they did this year's midterms. Don't make so many promises you can't deliver, Mr. President!)

Unknown to most Americans too, those especially who love to spout the "red, white and blue" and also get their panties in a snit about fiscal "responsibility" - most of the Afghan funding is off the books! The regular military budget is nearly $570 billion a year (way too high as it is, higher than the next 45 nations combined- which is a crime). The approvals for Afghan funding meanwhile have been via "supplementals" which are not strictly included as part of the annual budget proper. Thus, the true military expenditures each year are now more accurately approaching $750 billion when those off-balance sheet supplementals are factored in.

So, think about this now: if this farce of an occupation is allowed to go on for four more years, that is an estimated $200 billion a year in supplementals. With existing debt interest tossed in, it;s closer to $225 billion a year. That translates into a total of 4 x $225 billion - $900 billion, that will have to be paid for by getting more loans from the Chinese. Oh, no you say? Then show me where taxes are being increased anywhere to pay for this folly! Every other program, including extending unemployment insurance benefits, and not making cuts to food stamps - seems to require balancing cuts elsewhere- yet the military walks away scot free. How the hell is that???

At no time, not during Bush Jr's tenure, or during Obama's, has one cent been added to the tax rates to pay for the two occupations. Current estimates now put the total cost of both at over $3.3. trillion by the time everything is ended. That is $3.3 trillion that could have gone to repairing our infrastructure, or implementing a single payer health care plan, as opposed to an insurance company-co-opted health insurance reform plan.


While most of those in power refuse to openly acknowledge this horrific squandering of national resources for a state-building folly that'll end just like 'Nam, at least Nobel Peace laureate Oscar Arias is saying something. In a recent Denver Post piece ('Nobel Laureat Lashes Out', Nov. 17, p. 2B) he's quoted as saying:

"You need to change your value system. It's not fair for the U.S. to spend, on arms and weapons, so much money and then not spend on health care the money that is needed....Our experience shows that security does not lie in weapons or fences or armies."


Arias went on to note that a 25% cut in today's estimated $1.5 trillion in global miltiary expenditures could fund 1.9 billion laptop computers, covering every child in the developing world. Just a 10% cut could fund scholarships for 153 million needy students. Barely one fifth of one percent could fund a safe home for every Haitian family and one-fifth more, proper sewage and water systems so no more cholera can devastate them.

As far as the U.S. military budget, Arias suggested cutting it by as much as 10%. He obviously isn't factoring in the supplementals that are breaking the bank, putting us ever more in hock to the Chinese. Talk about false security! It could be cut by 50% and still be the best military in the world, especially if even half of the 1000 foreign bases were closed. We simply cannot afford the same military overstretch that brought down the Romans. Looking for new enemies to wage war against will only hasten our demise. As Arias put it:

"You have enemies in Afghanistan and Iraq...well, then make more friends instead of fighting your couple of enemies"

Of course, he forgets that some numbskulls actually want to start another war with Iran, which will really sink us into oblivion.

It seems President Dwight D. Eisenhower's warning of the "Garrison state" (in his April 16, 1953 address) is still going unheeded, as too many presidents have been more pawns of the military -industrial complex than their masters. In his speech Ike sounded the dangers of a mindset that enabled a broad political process that deliberately nurtured anxiety in order to procure swollen military budgets. Ike feared these would lead inevitably to economic stagnation and constraints on freedom. As he pointedly noted in his address:

"Every gun that is made, every warship launched, every rocket fired, signifies- in the final sense, a theft from those who hunger and are not fed, those who are cold and not clothed. This world in arms is not spending money alone. It is spending the sweat of its laborers, the genius of its scientists, the hopes of its children. This is not a way of life at all, in any true sense. Under the cloud of threatening war, it is humanity hanging from a cross of iron."

It's not very often in the history of this universe that a Republican President could demonstrate such profoud insight - but Ike did here. Would that the current lot (Dems and repugs) had one tenth his integrity and could see as he did how the current quagmires are bleeding us dry.

If they did, we'd not now be faced with what amounts to an ongoing "theft" from the poor, the medically uninsured, the chronically unemployed and seniors without the health care and prescriptions they need. Not to mention- responsibility to repair a crumbling infrastructure of bridges, sewer –water systems that is a national disgrace.

We have misplaced priorities.
Posted by Copernicus at 11:57 AM