Did Physicists Recently Create A Black Hole in a Lab? 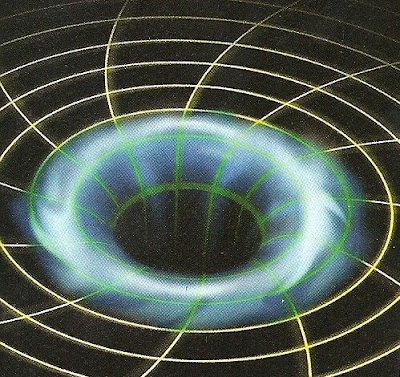 This turns out to be more than the proverbial $64 question, especially since so many nervous Nellies around the planet (especially in the media) appear to be terrified that one of these days a black hole will be generated (maybe even by accident) that will consume the whole Earth and everything on it.

Not to worry. We are talking chalk and cheese when we compare lab-incepted "mini" black holes with the products of stellar collapse - which certainly could devour the planet (as well as the whole solar system) in no time.

In the latter case, the black hole marks the end stage of evolution for very massive stars, generally considered to be in excess of 4 solar masses, but in any event - leaving a stellar core behind of at least 2-3 solar masses (which then collapses to the black hole). In these objects the gravity is so strong that no light or any radiation can escape. Moreoever, the g-field is so powerful that neighboring objects, debris, gases are readily pulled through the hole's "event horizon".

It is this feature that enables to indirectly detect stellar black holes though we can't observe them directly. Thus, since many stellar black holes are coupled to other normal stars (in what's called a "binary system") what we have is x-rays given off when the companion star’s gaseous layers are sucked into it. The orbital dynamics of the binary system mean that very powerful and periodic bursts of x-rays, registered on sensitive satellite detectors. . Mathematically, the very brief periods (of less than a millisecond) betray an extremely compact volume. The x-rays indicate accretion to a large mass and large heating effects from the gas being compressed as it enters the hole's event horizon.

One million black holes in the center of our galaxy (probably a conservative number) represents a lot of dark matter. Multiply that by billions of other galaxies, in similar scenarios, and one has an enormous store of dark matter. In fact, given the number of massive stars in our galaxy, it is likely that eventually, 90 percent or more will have collapsed into black holes, especially with currently accepted lower mass thresholds for black hole formation.

Now, it was Stephen Hawking who originally posited another kind of black hole that doesn't originate with the stellar collapse process. There are believed to be quantum black holes, which can also ‘leak’ radiation in accord with well known laws of quantum mechanics. (For much more, readers are invited to refer to: 'The Quantum Mechanics of Black Holes', in Black Holes and Baby Universes, by Stephen Hawking, Bantam Books, 1994, p. 101.)

Because radiation is mass, according to Einstein's E = mc^2, then Hawking radiation in quantum holes must reduce their mass as it leaks away, effecting "black hole evaporation". The specific feature of the emergent radiation defining it as "Hawking radiation" is that the emission coincides with that of a black body (perfect radiator and perfect absorber, with Planckian radiation distribution) bearing a temperature inversely proportional to the black hole's mass.

Now enter Daniele Faccio and colleagues in the Physics Dept. of the University of Insubria, Italy. They reasoned it ought to be theoretically feasible to fabricate a mini-black hole (or at least evidence for such) if a workable event horizon could be made which exploits the pair production processes of quantum particles and anti-particles out of vacuum fluctuations. The latter cause particle-antiparticle pairs to appear close to the event horizon of a black hole. One of the pair falls into the black hole and the other escapes. In order to preserve total energy, the particle that fell into the black hole must have had a negative energy.

If a suitable event horizon can be created, it can then take advantage of these pair production processes occurring all the time. Again, one member of the pair will fall into the hole and the other betrays itself by Hawking radiation as it escapes.


Thus, what the researchers found is that c(g) could be perturbed (i.e. reach higher than c limits) inside the glass using laser pulses.

This perturbation then, forms a moving event horizon which prevents normal photons from overtaking it since c(g) > c. Now, if a particle pair is produced (by pair production) close enough to the event horizon, they will be separated and unable to vanish again back to the vacuum. Faccio et al recorded photons hurtling outwards from the glass at a rate of about 1 per 100 laser pulses and with the key traits predicted for Hawking radiation.

Did the physicists successfully create or fabricate an effective mini-black hole? The jury is still out, and the primary reason is Faccio et al's own admission that they've no way to know that in fact the particle pairs really appeared at their event horizon. In Faccio's words:

"In our big piece of glass we have no way of saying where the other photon will end up".

One thing we can say, however, is that other physicists will seek to try to duplicate their results- and with them - actually verifying a working mini-black hole appeared, if even for a brief interval!
Posted by Copernicus at 9:51 AM