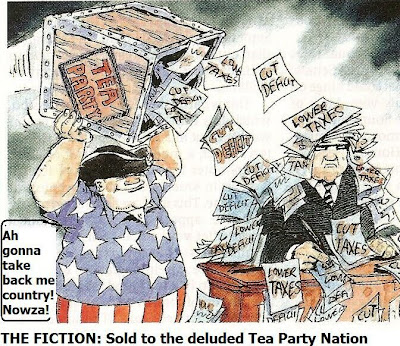 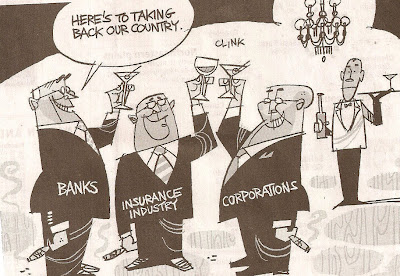 The TRUE situation!
While the Tea Party Brigade celebrates what it (deludedly) believes is some kind of "mandate" to halt Obama's "agenda" and repeal legislation, there are a number of warning areas they'd best pay attention to lest they overstep their bounds. One of them is here in Colorado, where not only was anti-immigration loon Tom Tancredo defeated for Governor (the top spot going to Dem John Hickenlooper, currently Mayor of Denver), but Tea Party Senate designee Ken Buck was defeated by Michael Bennet.

These two noteable wins, plus the resounding defeat of the "Personhood Amendment" (which I will get to later), provide a nice oasis in the midst of some depression for the Left. Indeed, in his column today ('The Right Wing Screw up') in The Denver Post, Vince Carroll lambastes Republicans for "blowing it" by opting for ideological purity litmus tests over common sense, by selecting as candidates total loon nuts in TP Dan Maes, and Ken Buck. (Maes was so pathetic, that he was the primary reason Tom Tancredo threw his hat into the ring, thereby splitting the Repuke vote and assuring Hickenlooper's victory).

Meanwhile, Ken Buck was the Tea Party darling to oust Bennet (appointed by then Governor Ritter, after Sen. Ken Salazar was selected to head Obama's Interior Dept.) and tens of millions were poured in by odious, nameless corporate groups (as for Sharon Angle in Nevada) to try to oust Bennet - described in Teepee campaign literature as "a rubber stamper for the Pelosi-Obama agenda of high spending and socialism".

Well the money and slander worked up to a point, as Buck came within about ~15,000 of Bennet, but in the end it was the ground game that won for Bennet, especially going door to door securing every last D-vote in the "People's Republic of Boulder" and also nailing as many Latino votes as possible (while Ken Buck, true to his TP DNA, avoided them).

On Election day alone, Bennet had 1,000 dedicated volunteers knocking on 325,000 Colorado doors as reported in today's Post ('Support from Women a Big Factor', p. 13A),. The volunteers assisted in every way they possibly could, including delivering food-lunches to Colorado State University students waiting in voter lines. Meanwhile, Latino volunteers targeted no less than 88,000 infrequent Hispanic voters. According to 'America's Voice' - a national Hispanic group, exit polls showed Bennet winning 81% of Hispanic votes, which formed part of a "Latino firewall" for Bennet. Meanwhile, Buck ignored Latinos though his campaign insisted it "sought out Latino support". (Right, like an atheist would seek out fundie support for office!)

Ultimately, what likely swayed the election to Bennet was the work of National Women's Groups, which combined sophisticated voter information with voter's lists to go all out. Many women, without even their assistance, were already turned off by two nasty remarks made by Buck - one in the primary campaign against his female opponent ('Look, I'm the one that don't wear high heels!') and the other from an old tape dredged up by the Bennet campaign in which Buck made a comment (when asked while he was an attorney if he'd prosecute a rape case) that, he didn't want to risk seeing the purported victim with "buyer's remorse".

The Bennet win is crucial because it gives the Ds firm control of the Senate even if Patti Murray ends up losing in Washington state to R-Dino Rossi, and Lisa Murkowski (now the putative winner over Tea Party clown Joe Miller in Alaska- the same bozo who shackled a reporter) chooses to caucus with the Repukes, who ditched her for Miller, instead of the Dems. The win also ensures waffler and sometime turncoat Joe Liebermann is out of the equation, and the Dems don't have to be hostage to his likes or dislikes. They can prevail for legislation requiring only a simple majority - given that Vermont Socialist Bernie Sanders always caucuses with them.

Meanwhile, the Personhood Amendment failed again, by a whopping 73% to 27%. This fundie-backed idiotic amendment (to the state constitution) would have granted full constitutional rights to all individuals "at the beginning of biological development". That idiocy would have included property rights, as well as votiing rights - all normally approved for self-motive, autonomous INDIVIDUALS, not de facto parasites that require nourishment from a host (mother) to survive and live. The phrasing was such that any woman who even tried to seek abortion, including after a rape or incest, would have been tried for attempted murder! The extent was so great that some litigators even saw contraception as being illegal and construed as "attempted prevention of the life of a person" if passed.

The campaign to educate Colorado voters, especially women, on what it would mean if Amendment 62 passed was waged by all the good folks at Planned Parenthood of Colorado, NARAL Pro-Choice Colorado and New Era Colorado, which raised $578,000 in cash contributions to run anti-62 ads on TV. (Some of them showing women being arrested at their homes for "attempted murder" and "reckless endangerment" - for daring to ski while 2 weeks pregnant and thereby threatening the "person")

Thus, the 'NO on 62' campaign had successfully summed up the measure as bad law, bad policy and bad medicine- reinforced by having a long line of lawyers, medical experts and women who suffered rape or incest - tell their stories. It worked!

Colorado voters need to be wary, however, as the fundie fruitcakes are imbued by such zealotry and fanaticism they never rest, and indeed, have promised yet another amendment for vote in 2012. We must be ready for them, as well as any new Tea Party kooks who may want to grab the state mantle of power and drive us all into a tea party ditch.
Posted by Copernicus at 8:52 AM