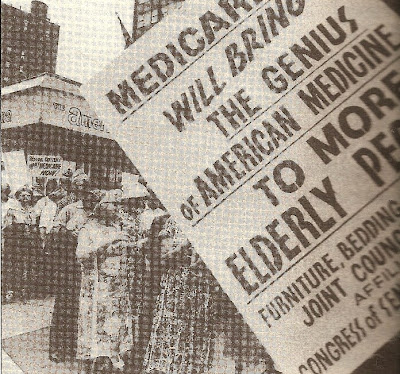 As the discussion continues unabated about whether the Wednesday New York special election result was an indictment of Paul Ryan's Nazified plan to deny healthcare to seniors (I refuse to dignify it by calling it a "Medicare plan" far less a plan to "save Medicare") it is well to go back into recent history and what life was like before Medicare came onstream in 1966. To put it succinctly: life for the aged in this country was generally nasty, short and brutish - with few options or appeals to assistance if one became seriously ill.

Much of this is detailed in several chapters of the Oxford University Press monograph, entitled: One Nation Uninsured, by Jill Quadagno, which gets to the bottom of why there is such massive political aversion to any kind of genuine health care coverage in this country which doesn't drag in the profit motive. Medicare is discussed because it putatively paved the way to at least get a 'Leg into the door' on the all but closed-shop capitalist insurance front, stiffly guarded by the likes of the AMA.

By ca. 1960 there were some 19 million citizens over age 65, and some 185,000 physicians (p. 69). The options for medical care, however, were sparse though socially insured medical insurance had been in the pipeline since the Truman administration. But by 1960 the most serious countermeasure to it was the Kerr-Mills plan- which basically confined assistance only to the "aged poor". By 1963 only 28 states had adopted any of it, and barely 148,000 seniors were covered. Again, this out of a total population of 19 million seniors.

Was Kerr-Mills a terrific deal? Hell no! In many states that established a Kerr-Mills format there still weren't the funds to finance it. This meant the older person and his immediate family had to be put on the hook for the money allocated to any care. Thus 12 states had 'family responsibility' provisions (p. 60-61) which "effectively imposed means tests on relatives of the aged, deterring many poor, elderly people from applying for support"

The author cites as an example the state of Pennsylvania (p. 61) wherein "the elderly had to provide detailed information on their children's finances to qualify for Kerr-Mills". Meanwhile, in New York many seniors actually withdrew their applications on learning their children would be involved, and would have to cough up any extra money for care the state couldn't cover (ibid.). This also meant the adult children had to appear before state boards and answer direct questions concerning their assets and liabilities, how much mortgage they owed - if any, as well as bank account balances. Most seniors, naturally, weren't able to tolerate this level of humiliation and scrutiny of their offspring, not to mention being held liable. In other states under Kerr-Mills, the elder person had to sign away the deed to his home (if he owned one) to pay for all medical bills upon his or her decease.

THIS is what life was like for the elderly in the days before Medicare. What about any seniors not among the "aged poor"? Their only option was a miserly private insurance policy with huge costs and meager benefits. Policies typically covered "only a portion of hospital costs and no medical care" (p. 61). This left the elderly with 67-75% of all the expenses to absorb, which puts the plan about on the same level as Paul Ryan's scheme (the GAO estimates seniors will have to pay at least 2/3 of all expenses), if the latter is ever introduced - say if the GOP gains all three branches of government next year, which would be a nightmare come true! As an example, "Continental Casualty and Mutual of Omaha provided only $10 a day for hospital charges and room and board, less than half the average cost".

Of course NO prescription drugs were covered, all had to be paid for out of pocket. The average commercial plan - even given this miserliness- was quite expensive, ranging from $580 - $650 a year, when the median elder income was only $2,875. Thus, nearly 25% of income was gobbled up by first tier medical costs, which could easily expand to 50-75% of income if a number of prescriptions were needed, and medical treatments, hospitalizations. Quadagno also notes that (p. 62) "insurers typically skimmed off the younger, healthier elderly" thereby forcing insurers to raise premiums. Thus "many elderly were priced out of the market entirely". In many cases, the consequences were horrific, as illustrated by the case of an 80-year old granny who allowed an umbilical hernia to go unreated, with the result it ultimately protruded to 18" out of her belly and eventually ruptured, with her bleeding to death on the kitchen floor while baking a cake (p. 63). Nor were such events exceptional.

Again, there is no reason this couldn't happen under Ryan's plan, and there'd be every incentive for insurance companies to skim the healthier (and younger) seniors as in pre-Medicare days, and zero incentive not to. After all, with no government mandate for providing care, why should the profit -oriented insurance companies put themselves on a downward treadmill or "losing wicket" as we call it in Barbados? They wouldn't if they had any grain of sense. Without a mandate or order from the government, you can also bet your sweet bippy they'd reject any elderly person with a pre-existing condition. This would be the proverbial no-brainer for them!

Thus, by the time JFK proposed a government health plan linked to Social Security, in 1960, America's seniors were more than ready. More than ready to stop being parasitized by commercial outfits, or humiliated by the likes of states under the odious Kerr-Mills plan. The only main opponents were the AMA which (p. 68) "ran newspaper ads and TV spots declaring Medicare was socialized medicine and a threat to freedom" and blowhards like Ronnie Reagan who made idiotic recorded talks trying to scare people by asserting (ibid.): "One of the traditional methods of imposing statism on a people has been by way of medicine".

Fortunately, most seniors who'd actually experienced the dregs of capitalist medical bestiality didn't buy this hog swill. They organized under groups like the National Concil of Senior Citizens (see image) and turned the tables by imposing relentless pressure on representatives (the most intransigent of whom were Southern Democrats, to whom LBJ had to finally confront and read the 'riot act'). Eventually, the opposing voices were muted and Medicare was passed.

Let's hope enough older voters-people become aware of this history before they remotely allow any plan like Paul Ryan's to take them back to the conditions of 1960!
Posted by Copernicus at 12:09 PM