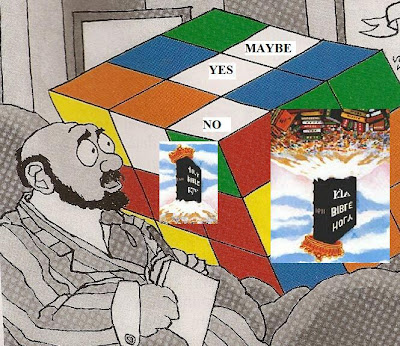 In some religious blogs it's become fashionable to debate on whether the Bible or a Church (as a generic "body of Christ") emerged first. On the side of the former are mainly fundamentalists who while they may know how to cite chapter and verse, are oblivious to historical facts. They claim that while a formal Bible may not have existed ab initio there were still coherent sayings of Yeshua that prefigured a later "correct, truthful" bible known as the King James. In fact, I will show this is all codswallop and uses specious arguments including retroactive claims to make a spurious case. In the meantime, those who argue that a single Church existed aren't aware that in fact dozens of differing Christian sects competed with only one prevailing: an orthodox form pushed by Paul of Tarsus.

First, let's get to the claim of an accurate compilation of Yeshua's sayings into a claimed original "bible" text that would later evolve to the King James version. Of interest is the tradition designated as "Q" or "Quelle" (the German for "source"). Textual analysis recognizes Q as a collection of Yeshua's sayings which doesn't exist independently (e.g. as a specific text) but rather can be parsed from the separate gospels, such as Mark. Germane to this Q tradition, is how - when one applies textual analysis to the books, gospels- one can unearth the process whereby the orthodox (Pauline) Church worked and reworked the sayings to fit them into one gospel milieu or another. One can also derive a plausible timeline: for example, The Gospel of Mark appears to have committed the sayings to paper about 40 years after the inspiring events, then Matthew and Luke composed their versions some 15-20 years after Mark. Finally, as noted in an earlier blog on this - John was actually an original GNOSTIC gospel that was reworked to conform to the Catholic Orthodoxy and added some 50-75 years after Matthew and Luke. (Again, if one knows Greek, one can easily spot the multiple edits in John that transmute its content from a Gnostic view to an orthodox Catholic one).

Here is where contradictory arguments emerge (conflating Church and bona fide Bible existence) because some fundies have insisted that "early church councils" adopted rigorous "principles" to determine whether a given New Testament book was truly inspired by the Holy Spirit. These are generally listed as criteria to meet for explicit questions: 1) Was the author an apostle or have a close connection with an apostle? 2) Was the book being accepted by the Body of Christ at large? 3) Did the book contain consistency of doctrine and orthodox teaching? 4) Did the book bear evidence of high moral and spiritual values that would reflect a work of the Holy Spirit? This is a noble effort, but it actually blows up in the collective faces of the fundies (who later argue against an orthodox Catholic purist take) because at the end of the day they rely on the criteria of a religion-church that they really can't accept!

This is a tricky point so needs to be explained in the historical context. The fundamental problem is that whenever one refers explicitly to "early church councils" in antiquity, there can be one and only one meaning: the councils of the Catholic Church, since those were the sole ones then existing. Thus, fundies who inadvertently (or desperately?) invoke "principles" or coda for NT acceptance demanded by "early church Councils" are in fact conferring benediction on the CATHOLIC, PAULINE ORTHODOXY. Thus, they are unwittingly validating the Catholic process for separating wheat from chaff in terms of which books, texts were acceptable and which weren't!

A more honest and logical approach, would be to simply argue that no official "Church" or religion existed then that was bequeathed special status by Christ, and that the acceptance of this or that text was under highly unique guidelines independent of "early church councils". Those guidlines would then be provided. Ideally, these criteria will be truly independent from those ordained by the RC Church's councils, which the fundies reject as a "harlot of Babylon". In any case, to be faithful to history, the new principles would have to also be disclosed in the book the fundies most revere: the King James version. But is this even feasible?

For logical consistency and to be coherent with any proposed (later) doctrine, the claim would only stand if the final revered product (the current KJV) had not been severely compromised or altered such that it lost content or context. This would require: a) no major re-translations or re-doings, b) no major omissions or deletions, and c) a consistency with what the earliest original (e.g. Greek) translations (say in the Greek Septuagint) allowed, with no major contradictions.

Now, let's examine each of these in turn. As for (a) we do know from the extant historical records that the KJV originated when James VI of Scotland (who came to be King James I of England in 1603), commissioned an enclave of experts to Hampton Court near London in 1604, to arrive at a compromise translation to try to bridge the gap between the Puritans and the Church of England. Thus, already we see that a compromise was injected into the mix, for the existing documents of the OT, NT. We also know the assigned objectives were: the translation of the Old Testament from Hebrew, and the New Testament from Greek, to be undertaken and respectively assembled by no less than 47 translators in 6 committes working in London, Oxford and Cambridge. The final results emerged seven years later, in 1611.

Back to the project: the translators were all instructed not to translate "church" as "congregation", and to preserve as much as possible the Bishop's Bible of 1568 (then the official English Bible). The translators were also granted wide latitude in how they specifically formed different translations of the text, in many cases being allowed to use the Geneva Bible and some other versions "when they agree better with the text" in Greek or Hebrew. This "mixing and matching" process is believed by many experts (e.g. Geza Vermes) to have been responsible for many of the more blatant contradictions that have emerged and which fundies are unable to explain away no matter how much they try. For example: in answer to the question posed 'Are unsaved sinners eternally tormented?:

This is a huge divide, and a serious blotch on the integrity of the KJV. Indeed, if such a fundamental question as "eternal torment" can't be properly addressed, how many other shibboleths will one find? Another example of the skewed process appears in the KJV rendering of Matt: 25:46:

"And these shall go away into everlasting punishment: but the righteous into life eternal"

Here, the Greek for "everlasting punishment" is "kolasin aionion." Kolasin is a noun in the accusative form, singular voice, feminine gender and means "punishment, chastening, correction, to cut-off as in pruning a tree to bear more fruit." Meanwhile, "Aionion" is the adjective form of "aion," in the singular form and means "pertaining to an eon or age, an indeterminate period of time. But it does not mean eternal!(Critical examination discloses the Bible speaks of five "aions", minimum, and perhaps many more. If there were "aions" in the past, it must logically mean that each one of them have ended!) Thus, a 'pick as you choose' process for the creation of the KJV obviously allowed huge errors to creep in, and Matt. 25:46 is an enormous one, given it's the sole place that refers to "everlasting punishment". So if this translation is wrong because of a cavalier Greek translation (of kolasin aionion) then everything to do with it goes out the window. Thus, the KJV fails test (a) for logical consistency.

What about (b), i.e. no major omissions or deletions? Again, we know from historical records (kept by the Anglican Church) that what eventually became the "King James Bible" by 1626-30 was in fact NOT the original, but rather 75% to 90% adopted from William Tyndale's English New Testament, published in 1626. This version was actually published in defiance of then English law - so it is amazing so much of it was then incorporated into the original KJV! Tyndale's tack was to render Scripture in the common language of his time to make it accessible even to a humble plow boy. But this meant ignoring the originally published KJV and resorting to his own translations, basing his ms. on Hebrew and Greek texts. In so doing he'd defied an English law from 1401 that forbade the publication of any English book without Church of England permission. But, Tyndale got the last laugh, because a year after he was strangled for "heresy" in the Netherlands, King Henry VIII granted a license to a complete "King James Bible" that was more than three-fourths Tyndale's translation from his English New Testament! Thus, the current incarnation of the KJV is not the original translation adopted by the commisson of King James I. Thus, the KJV also fails criterion (b).

Now what about (c), a consistency with the earliest original (e.g. Greek) translations? I already showed this was broken as soon as Tyndale's version was 75% adopted and the correlated parts of the earlier (King James I) ordained sections, removed. More to the point, I gave the specific example of how the earliest Greek text for the meaning of ""kolasin aionion" (punishment for an age) was destroyed and altered to "everlasting punishment". Thus, the original bond was alredy destroyed - perhaps in the 'mix and match' translation process permitted by King James I in his commission of scholars! Thus, the current KJV fails all three logical texts for authenticity and hence can't possibly be the basis for any erstwhile "biblical church" or any founding document, period.

Now, what of the claim for an "early Church" itself? Is there such a thing? The answer is 'No!'. While it is true that Christ said "Thou art Peter and upon this rock I will build my Church", that can be interpreted in more than one way. All the evidence, indeed, shows that the earliest conglomerate or "congregation" of followers wasn't a formal "church" by any standard but a polyglot group with shared beliefs, and shared outlook. I would argue that this group never evolved to become a formal Church, and that the latter didn't appear until the Edict of Milan was signed in 313 A.D. under the Emperor Constantine Augustus.

The problem with the Edict of Milan is that the then Christians essentially made a pact with "the Devil", i.e. signed on to a deal with the then Emperor that would allocate state religion status to the Christians (no more persecutions!) but at the cost of sharing that stage with the Emperor's own Sol Invictus (Sun worship) religion. Thus, the choice of December 25 for the nativity, since at that time that date was nearest the Winter Solstice or the 're-brith of the Sun' (when the Sun reaches its lowest declination and begins its apparent journey northward on the ecliptic, leading to longer days). Thus, the "church" codified in 313 A.D. was in fact an artifact of the original community called Christian, much like the current KJV is an artifact of the original book called King James version of the Bible.

Bible or church-based Christianity? As I said, a false dichotomy. The best plan for people, if committed to a spiritual existence and authentic relationship to whatever that means, is to toss out both church and bible and live without the graven images of either.
Posted by Copernicus at 10:31 AM