Why the GOP Spending Cuts Are About Ideology- NOT Deficits! 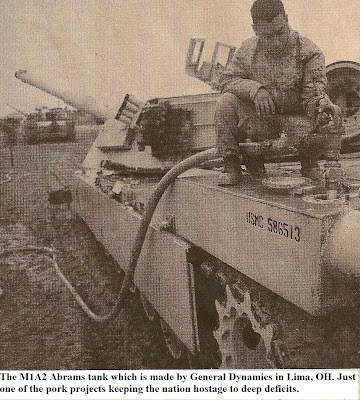 The news in yesterday's Financial Times ('Obama's Defense Cuts Under fire') was about what I expected. Though Obama has proposed a very conservative (some would say "miserly") cut of only $400 billion over ten years in the defense budget, the GOP are squealing like stuck pigs. The question is 'WHY?' because even this amount - as I've noted in many earlier blogs - is far too low. The cuts should be more like $400 billion A YEAR! But what this shows again is that the GOP is all about ideology, not really cutting deficits per se. (Which could easily be seen in merely their irrational resistance to any tax increases!)

Anyway, I decided to do a bit of back research and uncovered some conjunctions of purpose between assorted extreme Right wing groups operating in Texas (and specifically Dallas) before the JFK assassination. These organizations included: The American Political Forum, The Ku Klux Klan, The John Birch Society, The Dallas Committee for Full Citizenship, The Texas White Citizens’ Council, The National States Rights Party and The Dallas White Citizens’ Council. Looking at their commonalities (Farewell America, by James Hepburn, 1968), one beheld these:

- -Elimination of both Social Security and Medicare – regarded as “socialist intrusions” into a capitalist nation.

The tracts and screeds of H.L. Hunt, Oil tycoon and putative main architect of the Kennedy assassination are of particular interest. Not only did this screwball believe that that "communism began in the U.S. with the introduction of the government run postal service" ('Farewell America', p. 246), but also that tax cuts and military spending were the optimum ways to force the government's coffers to run dry and thereby kill Social Security and Medicare in a fiscal "end run" as opposed to direct elimination. Thus, he theorized that if deficits could be made large enough by the right spending (on military incursions and weapons, tax cuts) then eventually lawmakers would have no choice but to make cuts in FDR's stellar programs, to the detriment of all. Of course, we see that Hunt's visions have born fruit only recently, with what can only be described as the "Nazi" budget of Paul Ryan which essentially leaves millions of seniors with little choice but to off themselves- since no private insurer will take them on for the pittance of a voucher Ryan offers to replace Medicare. Euthanasia stations anyone?

But anyway, the current hypocritical GOP merely shows its over wrought concern about deficits is merely posturing, and they are really about ideology. They want nothing less than the destruction of FDR's cornerstone programs and understand - like the White Citizens' Councils and John Birchers of the 60s - that excessive military spending is one way to achieve that. Thus, if so many hundreds of billions are earmarked for military and defense pork each year, then they can't be allocated to shoring up Social Security, or Medicare.

More importantly, the bloated military budget is defended by using the incantations of "defending our liberties" while the real reason is defending our PORK! As an example, Buck McKeon is fighting tooth and nail (using a bill) to put in $272 million to sustain work on "developing the M1A2 Abrams tank". Why? Is this tank the greatest item since sliced bread? No, it is not. It's just that it would provide a boon to a General Dynamics plant based in Lima, Ohio and hence benefit Repug voters and their special interests. For the same reasons, Rep. Doug Lamborn has been fighting hard to bring in a new combat air brigade to Ft. Carson, Colorado at a cost of $1 billion. It's all about the pork. Never mind Lima, OH, Colorado Springs and other elect cities get it (off the tax monies of the many towns and cities that don't) but that's how the game is played and it's to the detriment of us all.

But why be surprised at all at this GOP farce? Before Obama became president they had no problems exploding the deficits! Hell, then VP Dick Cheney was even heard to famously (infamously?) assert: "Deficits don't matter!". Oh yeah? Then how come they do now? So the repukes under Dumbya started two occupations of choice at a cost of over $3 trillion, and continued budget busting tax cuts which were supposed to be sunset this year but were allowed to continue, then they approved a Medicare drug program that benefits Big PhRma and insurance companies more than consumers. (The termination of the donut hole isn't even on the table until 2020).

It's time Obama got tough with these miscreants, and moreover, make it clear that this $400 billion cut in defense over ten years is merely the first of many. We simply have other, higher priorities than military-defense bullshit and endless toys, and that includes infrastructure which I will get to in another blog. This will be based on the recent report in The Economist that the U.S. infrastructure is now dead last among the OECD nations. We spend 2.4% of GDP on our roads, water and sewer lines, bridges etc., railways, highways, while the European nations spend 5%. No wonder we are falling apart, even as assorted nincompoops laugh and gloat over retrieving Osama's porn stash. I have news for them, given what's facing us now in terms of deteriorating roads, bridges because of all the spending trying to catch bin Laden, he is definitely having the last laugh. We can correct that, but only if we have the will to limit and cut this obscene military spending driving us off a cliff!
Posted by Copernicus at 8:51 AM