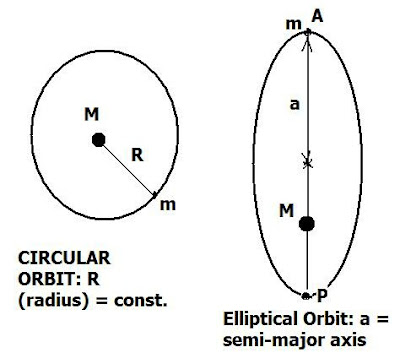 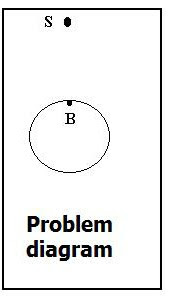 A primary consideration of mechanics is orbital theory, most of which derives from Isaac Newton's Universal law of gravitation. As we saw in a previous blog, this force of attraction, between the mass of the Earth (M_E) and a smaller mass m, on its surface at a distance equal to its radius r:

If we set the weight (w =mg) equal to the force of gravitational attraction, F, we obtain:

In other words, g is independent of the mass m on the Earth's surface. Now, what about objects actually orbiting the Earth, say like artificial satellites? In this case we understand that what keeps the objects orbiting is the centripetal (or center-directed) force, which is defined as:

Then to achieve an orbit (say circular of radius R = r + h where h is the altitude above the surface)) we need this centripetal force F_c to equal the force of gravitational attraction, F. Or:

But this can be simplified even further, using the result for g above, and also using the angular velocity w = 2π/T = v/R, so:

We call such an orbit geosynchronous or "geo-stationary" because the orbiting body retains an essentially fixed position above a point on the Earth and its motion (velocity) in orbit matches the rate of Earth's rotation.

Note that what we have discussed applies to circular orbits (see left side of top graphic) for which the radius is constant. But for planetary bodies we have orbits that are actually elliptical (see right side of graphic) and instead of the radius we use what's called the semi-major axis, a. This is half the total distance across the long axis of the orbit. On one side we have the point A for aphelion, which denotes the furthest point of the planet from the Sun, and on the other side we have the point P, for perihelion, which denotes the closest point to the Sun.

Rather than the center, the Sun occupies one "focus" of an ellipse -and it is known all ellipses have two foci. For a planetary orbit, the "other focus" is simply a mathematical point. (Which can be located, again, if one knows how to apply the planetary data - e.g. the known eccentricity e, the semi-major axis a, etc. using the correct formula)

As to where a particular focus is located, this will depend on the particular planet being referenced. For example, in the case of the Earth, with eccentricity e = 0.016 (approx.) the other focus would definitely be interior to Mercury's orbit. However, Pluto's - with e = 0.248, would not. The distance of "displacement" from the ellipse center is always given by D = e x a, where e is the eccentricity and a the semi-major axis (mean distance to the Sun, for example).

Meanwhile, in the case of Pluto, at a mean distance of 39.5 astronomical units from the Sun:

A very useful law here is Kepler's Harmonic law, which basically states that the semi-major axis of a planet cubed, is proportional to the period, squared. In more detail,the squares of the periods of revolution of two planets (being compared) equal the cubes of their semi-major axes, viz.

Usually - to make things simpler- we adopt Earth values for P2 and a2, and convert the other planet's (that we wish to find) for P1 and a1.

In the case of the (other) planet's distance, we therefore want to solve for a1.

Here's how it works in practice.

We take P2 = 1 year (the period for Earth to make one revolution).

then the equation simplifies to, with k a constant of proportionality that
can be set equal to 1:


or, solving for a1 (and remembering the units used)

Note that the whole quantity on the right side is raised to the one-third (1/3) power, or the cube root.

Then, solving for a1:

I left out units, but we understand that a1 is in AU so

This can now be converted into miles:

Any other planet's distance can also be found, once you know what its period (P1) is.

Note that there is a more exact form of the law worked out by Newton that gives:

where P is the planet's period, a the distance (we want to solve for) and G the gravitational constant, M the mass of the Sun, and m_p the planet's mass.

b)What is the time for S to make two orbits of the Earth? Justify your answer.

c)To an observer on S, would the Earth show phases, as the Moon does to observers on Earth? Illustrate your answer with a diagram.

d)Imagine the distance between S and the Earth’s center is increased. What effect, if any, would this have on the period?

e)Assuming the specific increased distance D = 2 R (where R = d + r is the original distance, and r is the Earth’s radius) what is the effect on the force of gravitational attraction exerted by Earth on S? Comment on the statement: “S has mass, but no weight”.

b) Given that Jupiter's eccentricity e = 0.048 find the displacement distance D from its orbital ellipse center.
Posted by Copernicus at 12:58 PM