Yes, Time to Take Down TABOR in Colorado! 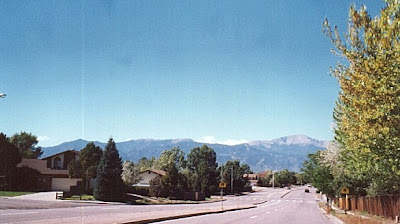 After moving to Colorado ten years ago, my wife and I have beheld an increasing and appalling deterioration of conditions. It's not just an increase of potholes in the roads (belying the image shown of a road not far from where we live), but also the fact many parks and outdoor areas are being left to the weeds, as paths for hiking become overgrown and fit only for the rattlers that frequenly cross them - while restrooms remain shuttered, and swimming pools for kids are closed during the summer. What happened? Some deadly virus? No, something worse! TABOR: The misnamed "Taxpayers' Bill of Rights" that passed in 1992.

As with many ill-conceived referenda, people-citizens of the state didn't study its long term consequences enough. All they saw was the savings they'd get on property taxes (like the California voters that passed Proposition 13 way back when, and now whine because their schools are falling apart and they have to let good teachers go!) - but not how the benefits would cost them their quality of life, surroundings, schools, highways etc. Now, nearly twenty years later, many citizens groups have seen what it's brought and are coming together to try to get it repealed. That is, both Republicans AND Democrats are coming together.

Why is this misbegotten law so bad? Well, because TABOR inherently limits state spending (even during large population growth-influx) based on an insane formula that - if more citizens had math backgrounds - would never have seen the light of day. TABOR dictated spending limits are fixed by the general condition that the rate of increase in state budget spending cannot exceed the rate of population growth (dp/dt) and the rate of inflation (di/dt) for any given year. Thus, in general:

Now, the TABOR baseline for that particular fiscal (net) population growth (those entering the state - those exiting) was 3%. Then:


This means that a difference of: 14% - 4% = 10% of the state budget spending increase must be returned as refund to the taxpayers. In other words, six-tenths or 60% of the 14% by which the state "over-spent" must be returned. That is

is refunded as TABOR refunds. (E.g. the state loses that amount, and must allocate the NEXT year's budget spending total minus that decrement).

The inherent problem as to why refunds are usually generated and not avoided is simply that state budgets must be planned and spending allocated in advance of the new fiscal year, while TABOR's oversight on them only occurs ex post facto (e.g. when the spending year has already passed). Thus, the inevitable delay means that taxpayers will always collect since the state will always typically tend to spend MORE (based on increasing cost of basic needs- health care, construction materials etc.) than not. The obvious problem is that a losing wicket (as we call it in Barbados) is continuously dug out, and the people of the state must see their schools, roads, parks etc. deteriorate because the money simply isn't there even for the most menial upkeep.

Even college bound students suffer, as part of the funds normally allocated for universities (to keep in-state tution down) are now no longer available, forcing the state's universities to increase tuition, room and board etc. Those increases have now been so high the past ten years (more than 40%) that most prospective students can't afford them without taking out ruinous loans. As we see, the cost of getting what you wish for may not always provide all the benefits you think you had coming. This is a lesson one hopes other states learn, before they also implement TABOR-style fooolishness!
Posted by Copernicus at 9:42 AM