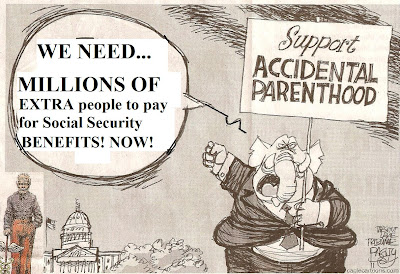 How many truly DUMB (as in DUMBO, the flying elephant) arguments can the GOOP party come up with in a week. Right now, I believe they're trying to break a record. We've already beheld the idiotic, meritless Ryan Medicare 'speed seniors on to death' plan. Then there was Robert J. Samuelson's for means testing based on assigning a special "high income" class of elderly predicated on an income barely 36% above poverty level. Now the next inspired notion, compliments of Colorado Springs Gazette editor Wayne Laugesen, is to import millions of immigrants and also shame the American people into having many more babies. Why? In order to provide the money to support an increasing elder population which can't simply have its Social Security and Medicare benefits withheld by law. Oh, and there was Laugesen's other inspired tweak: possibly deny benefits to all "childless retirees" because, of course, logically if one has had no children how can he or she rightfully be expected to count on others' children for support?

Of course, the whole stupid argument is wrong. Wrong, wrong and WRONG! Indeed, Laugesen's "remedy" is really a spin off of Ben Wattenberg's from the 1980s in his book, The Birth Dearth. Both are so egregious that either hardly bears response, but given the extent to which our public discourse has been debased in the Bush years, one can make no assumptions. Let me just say then that the proposed response of increasing numbers to provide more workers to support Social Security is insane and egregious. Moreover it's a population Ponzi scheme! Since the libertarians in this country get their panties in snits continously over "Ponzi schemes" they ought to pay especial attention to this one. Because if 50 million additional workers are needed to support the existing 45 (retired) million people, how many more will be needed to support those 50 million and the tail end of the earlier 45 million? Can't these imbeciles see that the base of population support is a never-ending growth proposition? Besides it's not needed!

First, the 1983 Social Security reforms(by raising the FICA rate to 6.2%) was done explicitly to cover the coming boomer onslaught. Thus, the solution to the greater number of retirees was already provided 30 years ago! That the Social Security funds have dwindled is not because there was no solution or no extra money put in, but because the Social Security monies were never sequestered from the general revenues! (A terrible choice made by LBJ in the 1960s, in order to use SS monies to help pay for VietNam and reduce the size of the deficits).

The lazy, callous and stupid derived a high "chuckle factor" from Gore's "lockbox" recommendations in 2000 but he had exactly the right idea! Indeed, the Budget Enforcement Act of 1992 expressly provided for a Social Security lockbox, but it has never been enforced. Another hollow law. What Gore ought to have done is referenced this law, and called for its rigorous enforcing.

Another canard, circulated by right wingers, is that there is some "seismic gap" between what has been promised to retirees and what government can pay. This is more twaddle peddled by the likes of neo-liberal Repukes like Robert J. Samuelson. In fact there are three things that can be done immediately to sustain Social Security - despite its pillaging by congress - and which require no draconian solution such as a massive population increase:

1) Enforce the "lockbox" sequestration of monies articulated by the Budget Enforcement act of 1992.

2) Gradually raise the maximum earnings base that determines the amount of earnings taxed (under FICA) and credited for benefits. While many insist this shouldn't be done because "people earning over $100,000 a year don't use Social Security" - there is ample evidence that just as many or more DO use it. So, it is only fair that they pay a proportionately higher FICA rate. A first increase ought to bring the FICA subject threshold up to at least $250,000.

3) Advance slight incremental age increases (but by race and ethnic demographics) in order to receive full benefits. Since the average white middle class American lives to 75 today, it is reasonable to up the maximum benefit age to 68 or 69, certainly for all those born after 1960. However, this can't be done for ALL Americans! Since African-American males live to a median age of 64, it makes more sense to let them take full benefits by age 62. Other corrections can be made according to the actuarial statistics, and also the nature of work a person has done. (For example a manual worker would be able to retire from the work force at 62 with full benefits, if in ill health).

Again, I address this precisely because so many today exploit the alleged "bankruptcy" of social security to justify inflating the U.S. population by enhanced birth rate or allowing many more immigrants into the country. This is a non sequitur, and unless a lockbox solution is ultimately implemented, we can import the whole of India as workers and Social Security will still be in parlous straits - because congress critters will keep on raiding it. Why? Because they can! Pouring more gallons of water into a large container with enormous holes in its bottom is not going to fill up the container, even partially! And one should expect a certain minimal level of intellect to grasp it!

An even worse error, almost, is the assumption that ample jobs of enough remuneration will even be available to pay for retirees' social support! Given corporations farm out jobs to India and other places at the rate of 350,000 a year then where is the basis for presuming that having an influx of immigrants (or new babies) will see them all getting jobs to pay for the support of elders? This is plain bollocks! Right now, we have an unemployment rate of 9% and with 14 million people under or unemployed. The rate of job creation is barely 240,000 a month or 100,000 above population replacement level. If the population were to be increased by say 10%(via immigration, say), it would take nearly 16 years to get all the existing people without their jobs back to work, plus integrate in the newly minted citizens into the works. The outcome would almost surely be much higher unemployment rate, maybe 14%, not more employment for the added people to pay for social insurance for the pre-existing elderly!

As for Laugesen's notion that 'child -free' retirees aren't deserving of support, save it for the Nazis. The child-free made the choice correct for them and ought not be made to suffer for it because of myopic, purblind capitalists and their lackeys. Moreover, given each kid costs an estimated $240,000 to bring to the phase of high school graduation, perhaps those couples rightly inferred they lacked the money to do the job or else lacked the emotional requisites. But beyond all that, this child free couple did pay in with their FICA taxes (6.2%) each and every payday so that they certainly deserve whatever they have coming back, and more! They also spared the planet extra mouths to gobble more food products and water, while creating more pollution and waste. They, in fact, ought to be awarded an ADDITIONAL Social Security stipend ($100 a month x the average children per U.S. household) for not adding to the population problem!
Posted by Copernicus at 12:58 PM