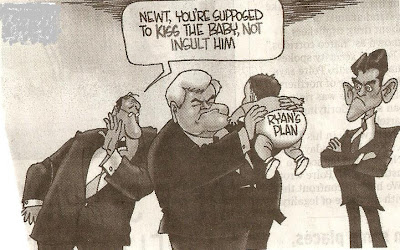 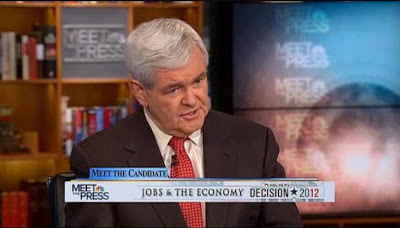 One thing I can't abide is weak-kneed political worms. Candidates or actually elected officials who on one occasion courageously say what they mean and mean what they say - based on principle- then after a firestrom reaction breaks out they take it all back like moral pipsqueaks and worse, apologize! As if well-thought out statements of fact or principle are recallable, like Reagan believed cruise missiles were!

So the latest such incident has been the clearly sober statements of Newt Gingrich regarding Paul Ryan's "Nazi Budget" (which term I've deliberately used because it means mass deaths for seniors!) on 'Meet the Press' this past Sunday. Anyway, Gingrich was asked about Ryan's proposal, which was passed by the GOP-controlled House in April, and mandates that people 54 and younger choose from a list of “premium-support payment” options as opposed to having standard Medicare. The payments would be around $12,000-15,000 per year per senior, but anyone over 60 who's attempted to get private insurance on his or her own knows this is a joke. The minimum cost plans I saw three years ago were $15,200 a year: $850 per month and $5,000 deductible paid before any care received. With co-pays for exams, prescriptions and so forth as well as treatments, the costs would easily exceed $20,000- $22,000/ year and that's assuming no pre-existing conditions, like high cholesterol, heart arrythmias, diabetes, high blood pressure, overly high PSA (for men) or too low a glomerular filtration rate (showing bad kidney function). All elderly having any of these conditions would be out of luck, period, full stop. Do not pass 'Go' do not go to the doctor's because he or she will laugh in your face. Thus, your only option is to maybe visit the local pet shelter and ask if anyone can put you down.

Gingrich, for his part, appeared to me to be in possession of his faculties when he answered the question, and not drunk or under any other influence. Hence, it was a Vegas bet with nearly sure odds his response was based on intellectual perceptions of the actual merits of Ryan's plan. So Gingrich rightly scoffed at the plan, asserting: "I don’t think right-wing social engineering is any more desirable than left-wing social engineering,” and then adding, "the reform plan is too big a jump....I’m against Obamacare, which is imposing radical change, and I would be against a conservative imposing radical change.”

But after blistering attacks on the Right (to be expected since they're all off kilter in their reality perceptions anyway) Gingrich adopted the stance of a beaten whelp and pouted: "I made a mistake". After Democratic ads that "Even Newt Gingrich objects to Ryan's Medicare plan" Gingrich backed off even further to the extent that "no one ought to be using those words since I already admitted a mistake!".

Well, sorry to disabuse you, Newt, but it doesn't work like that! (Let's also recall how candidate John Kerry in 2004 was given no slack for trying to say he'd made an error when caught on video saying he "voted against the Iraq funding before I voted for it".) The sad truth is pols and candidates have to be held accountable and given this is now a part of the permanent public record, there's no escaping it.

The manly thing to do would have been for Gingrich to tell his critics to back off and get a life and what he said was based solidly on what he believed. Sure he'd have lost the extreme Right loons, but so what? He'd have gained a ton of moderates and it was obvious to me he was trying a "third wayish" tack to appear to stake a position between Obama's Affordable Health Care Act and Ryan's insane Medicare plan (though to be truthful I dispute the two are polar opposites of each other). At least Obama's plan serves people in some way - though only half the people it could have, had insurers been held to a public option, but Ryan's plan just cuts people loose by the tactic of "shedding demand" by preventing access via immense economic (and precondition) barriers.

Sadly, what Gingrich's interlude in the 2012 spotlight shows is that he's not ready for prime time, or the presidency. He ought to have left history rest with his attempted "Contract on America" from 1994, a plan just as ditzy and lame as Ryan's is now, which also didn't work. It becomes more and more obvious to me that, excepting any major booboos, Obama ought to win the next election in a landslide.
Posted by Copernicus at 12:10 PM