Get Set! Judgment Day is Three Days & Change Away! 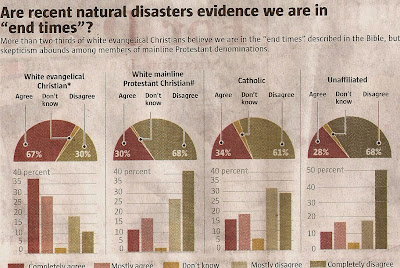 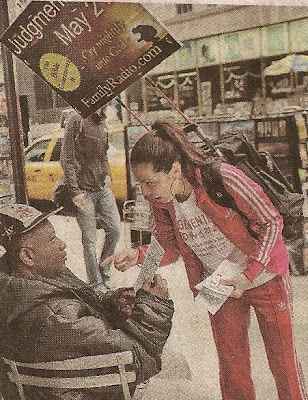 Yes, you heard it! The Judgment is nearly upon us! Get ready! Get right with the Lawd! He's coming! This Saturday, May 21, at about 6 p.m. "local time" (the forecasters don't say for which time zone!) the Judgment is to commence. At least according to another set of nutballs associated with a California-based "Christian Network" which also broadcasts over Family Radio. This according to a Denver Post report from two days ago. Well, they are also predicting the "Rapture" will finally occur, and will whisk away all the goody two shoes Xtians before the bad nasties start. I imagine the latter will translate to monster quakes and tsunamis, Category 5 hurricanes- even in Alaska- and hundreds of F5 tornadoes fifty miles wide plowing back and forth across the U.S. Not just the heartland, but all of it- from California to Maine. And then.....Christ will come to Judge! But hold strain! Isn't the Anti-christ supposed to emerge first? Isn't there supposed to be a Seven Year "Tribulation" before the Judgment, and also "Armageddon"? Can't these looney tunes get anything right?

Well no, because you see, they are all certified whackjobs like the one shown in the accompanying image trying to terrify a hapless gentleman by wagging her finger at him and warning him to "Get Saved!" This begs the $64 question: From what? The febrile delusions of people who need to be strapped down, placed in straight jackets and administered 2 amps of electro-shock each hour?

I mean, let's look at it logically. It's bad enough these "End Times" purveyors of whatever stripe have never been correct in their predictions, dating from the year Dot, A.D. They continually trot out their crap, from the Hal Lindsey forecasts (The Late, Great Planet Earth) that the Tribulation was to commence in 1988, to the Heavens' Gate malarkey in 1997, and now these cheese whizzers insisting it all comes to a screeching halt on Saturday, May 21, 2011.

Worse, they claim the Judgment is to begin at "6 p.m. local time" but this is useless! There are, in fact, 24 or more sets of "local mean time" around the world! Each is referenced to a specific time zone, which is tied to a longitude. (Greenwich, England at 0 degrees longitude defines the "marker" with all longitudes east of it having later times (15 degrees per hour) and all longitudes west earlier, by the same. For example, right now, my local time is 10.15 a.m., but it's 12.15 p.m. in New York City and Miami, and 5.15 p.m. in London. To say the event begins at 6 p.m. "local time" without referencing for which location or longitude is therefore useless. One could as well say, for a solar eclipse to occur on some date, it starts at "noon local time". But anyone even one time zone away would therefore miss it!

These whackos also claim "the Rapture will begin May 21 with a great earthquake on the Pacific Rim and everyone's world will begin to end at 6 p.m. local time." Again, based on what I described above, this means there will be at least TWENTY FOUR "end times" beginning around the world, presumably with twenty four endings! This prompted Westword magazine to facetiously opine that maybe they ought to have called it "Judgment Happy Hour".

As for the "Rapture" I already noted in previous blogs (last year) that this bunkum is nowhere in any scriptures. It originated with a 13-year old Scottish girl in whose dreams and imagination people were levitated en masse. These were then embellished and woven into wholecloth, fabricated codswallop by a Scottish Minister. He then kept repeating the nonsense over and over, and as we know, when something keeps being repeated gullible people begin to take it at face value after a while. Eventually the gibberish made its way "across the pond" as the first evangelicals (with Rev. Josiah Strong) were setting up shop in the U.S. and they adopted it hook, line and sinker. It's been a part of Evangelical lore ever since.

More worrisome from the viewpoint of critical thinking (or lack of it) is the astounding number of mainline Christians who believe in an eventual Judgment Day and "End of the World". A 2010 Pew Research Poll found 41% of Americans believe Jesus will return in the next 40 years! Then there are the other survey results (see graphs) showing that 67% of evangelical Christians believe "natural disasters are evidence we are in the end times" while the percentages are rather lower for Catholics (34%) and mainline White Protestants (30%). But again, most of this is because the eschatological (or is it 'scatalogical') bunkum has been force fed so many so often, including in idiotically transparent fiction such as the ''Left Behind' series. (I actually started watching one of them but had to leave after five minutes, the storyline was so hopelessly inane, moronic and manipulative).

At least one group of sane people will react in a sane and rational way come Saturday. Atheist groups around the nation plan to "party party" round the clock on Saturday, until all the foolishness ends (including the Family Broadcast of the End from 6.30 p.m. to 8.30 p.m. - Pacific Standard time). According to American Atheists President Dave Silverman (quoted in the D. Post):

"We've been here before. There have been hundreds of failed predictions like this throughout history."

Other Atheist observers and commentators are not nearly so sanguine. As American Atheist spokesperson Bart Scott said:

"Unfounded predictions can push people over the edge. Those people can end up hurting themselves and others"

To which I say, let's just make sure we have ample straight jackets handy (as well as electro-shock machines) in case too many fellow citizens "lose it". We have to do our part to make sure their brains don't have total meltdowns from this garbage - soon to reach a critical mass.
Posted by Copernicus at 9:00 AM