Greenland Arctic Ice Loss Accelerating...So Why are So Many Snoozing? 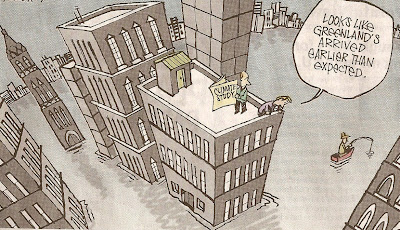 People, especially in coastal areas, ought to be planning emergency measures when the sea level enhanced floods overtake them, but nonchalance appears to dominate. People got more exicted over the death of one terrorist than the oncoming global inundation that's sitting on our doorstep - timewise.

According to a report just issued by the Arctic Monitoring and Assessment Program (the scientific arm of the 8-nation Arctic Council) the ice of Greenland and the rest of the Arctic is melting at such a rapid pace now that it could help raise global sea levels by as much as 5 ft. in this century. (Recall the Indian climate scientist and member of the IPCC who forecast this and was driven out of his post by rabid global warming deniers and their paid lackeys in the media? Well, now the 'Wolf's at the door" so to speak!)

The AMAP warning comes as nations remain bogged down in their two-decade old talks that promote piddling little differences, like carbon trading at other schemes which - while offering more market incentives (and basis for new credit derivatives) do little to address the underlying source: mainly that people are still using too damned much CO2 spewing fossil fuel. In the case of oil alone, nearly 1,000 barrels a SECOND and this even as the population and demand grows toward 1,500 barrles a second! When are humans going to wake up, or are they too dumb to? Or is it that we are consigned to inevitably give sudden events like terror strikes more oomph on our brain radar than slowly unfolding catastrophes?

This new report is to be discussed this coming week by 400 international scientists in Copenhagen, then by the Arctic Council in Greenland. It ought to grab at least the climate science community's attention. This AMAP report, based on much improved research techniques, has found that Greenland's massive ice sheet is projected to help raise global sea levels by 35 to 63 inches by 2100. AMAP added that the estimate was highly uncertain, and no one should be fool enough to believe that year is when the worries begin. Oh no!

In a blog two years ago, I warned about the impending signs of ice sheet breakup and melting in Greenland in connection with the phenomenon known as "Jokulhlaup" (cf. ‘Jokulhlaup Observed in Greenland ice sheet’, appearing in Eos: Transactions of the American Geophysical Union (Vol. 89, No. 35, 26 Aug. 2008, p. 221). The cited paper specifically noted an increased frequency in occurrence of “jokalhlaups”or sudden glacial bursts of melting runoff from glaciers. It was this phenomena that also played a role in the “unusual cracks" that set off the separation of a “chunk of ice the size of Manhattan” (19 sq. miles)from Ellesmere Island in Canada’s northern Arctic. In the case of the increasing Greenland Jokulhlaup we are looking not just at one massive breakoff, but the loss of perhaps 45% of the entire Greenland ice sheet on account of the underground splintering effects producing ever larger cracks in the ice and the inability of it to support the overlying permafrost and other ice. Thus, onset will be sudden and perhaps more like a "terror attack" from nature.

Meanwhile, we note that the AMAP estimate is up from the 7 to 23 inches of the UN panel. The UN group omitted the possible acceleration of melting, but then this is understandable given the nature of the Jokulhlaup process wasn't really known until 2008. Thus the UN group mainly based estimates on the simple expansion of ocean waters from warming and the runoff from melting land glaciers elsewhere in the world. The new AMAP assessment finds that Greenland was losing ice over the 2004-09 interval four times faster than in 1995-2000. If the Jokulhlaup process is continuous, there is no reason not to believe that over 2009- 2014 the ice lost will be eight times faster or even more, as the Jokulhlaup cracks in the subterranean ice poliferate and even link up in a nonlinear way. Thus, my prediction is we are headed for a massive collapse by perhaps 2020 or sooner.

Aggravating this is the fact that the cover of sea ice over the Arctic Ocean is also shrinking faster than projected by the UN Panel. Summer ice coverage has been at or noear record lows since 2001. The AMAP predicts it will be nearly ice free in 30 years, maybe 40, but I predict it may be much sooner, maybe in 15 years. The reason I say this is because of the well-known albedo feedback effect. Recession of Arctic Ice directly affects how much solar radiation is absorbed and how much is reflected back into space. The more absorbed the greater the rate of melt.

The basis has already been described by Sagan and others: Melting of ice caps (already occurring) results in diminished albedo (reflection of solar radiation back into space), a darker Earth surface - with more IR (infrared or heat radiation) absorbed - reinforcing the existing loop and enhancing it leading to more melting of ice and more IR absorbed. The danger, barely touched on by the AMAP, is of the Runaway Greenhouse Effect, as much as sea level rise.

Even now, before the Runaway has set in, we know the acidity of sea water has increased nearly 30% since the Industrial Revolution. Given that sea life, including corals, fish, and the critical phyto-plankton (which provide most of our planet's oxygen) can only exist within very narrow pH levels this may be most disturbing. It means that there is the potential for humanity to suffer devastating famines and loss of life long before the Runaway Greenhouse charges up. Is anyone listening, or are we all still obsessing over Osama and what his gaggle of robed loonies will do next? One thing for sure, if we want to be around much longer we better get our damned priorities straight, and that means investing as much or more in making the changes needed to avert climatic catastrophe as we have chasing terr'ists!
Posted by Copernicus at 10:42 AM