Christ in a cap! Now DEATHERS! 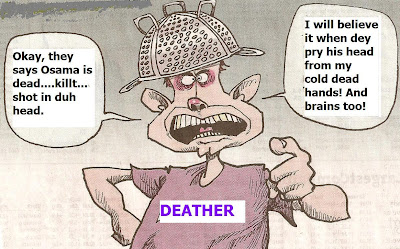 The paranoid delusional fantasies in this country seem to be metastasizing faster than a nuclear chain reaction. First we had the "Birthers" led by The Donald, who insisted Obama wasn't a naturally born U.S. citizen but some kind of exotic, un-American outlier from the backwoods of.....Kenya. Even Obama presenting his formal long form birth certificate wasn't enough for these Jaspers. They insisted it was a fraud. One whacko, actually writing in The Financial Times, insisted Obama should be "impeached for forcing Hawaii to break its own laws, regulations" - when it was dimwits like this guy (from Texas) that incepted the political pressure on him to clear the air! Is there an asylum big enough to hold all these fruit cakes, or must we send them all to Mars? Wait, the space program is being mothballed, so that's out!

Now the latest conspiracy making the rounds is that Osama Bin Laden isn't really dead. That it's all a fake. According to some comments that our local right wing rag posted (if you can believe it, a RW rag calling out right wing whackos) they varied from: "Where's the mugshot?", to "He was shot in the head, then buried at sea? Sounds suspicious!" These whackos sound like they have almost as many hinges and screws loose as the numbnuts who (in the late 60s) believed the first Moon landing was created by imagineers on a film lot, full of props!

Evidently, NPR reported on the new phenomenon Tuesday, and now "deathers" has been added to the conspiracy lexicon along with "birthers" and the long lasting "truthers" (who believe the Twin towers were brought down via an 'inside job' using dynamite in combination with accelerants). Where do these morons dream this crap up? Worse, by confecting such outlandish conspiracies they make the work of valid conspiracy research (as in the JFK assassination) a thousand times more difficult. People then tend to lump all conspiracies in one big dumpster labelled: Psychotic Babble.

So what is it these Deathers want? Well, photos of Bin Laden's corpse for one thing, though Obama's press secretary today (in a News Conference) made it clear that ain't gonna happen, since this is not who we - Americans - are. Or shouldn't be! We're not ghouls like the terrorists who behead their victims then photograph themselves holding the heads. We should aspire to be more than that, and just accept the DNA evidence exists and vindicates the claims made. In any case, even showing a photo of OBL won't make a difference. The Deathers will probably treat it like the old alien autopsy video that surfaced some 10 years ago. They'll say it is a "forgery". Once the brain commits to irrational disbelief, all the evidence mustered in the cosmos won't alter its preconceptions.

At least one voice of sanity in response to the Deathers has been Marco Rubio (R-Fla) who said:

"If he's not dead, let him produce another video!"
Indeed! But the bottom line may be what the Colorado Springs Gazette editorial today observed:

"We're a culture of diminishing interest in the truth and a destructive obsession with sensational tall tales that defy the gravity of evidence, reason, and proof. It's a recipe for chaos and injustice"

Fair enough, but let's bear in mind that politicians and news organizations have a role and responsibility in this chaos and injustice too. If they refuse to expose the truth, either when confronted by the conspiracy lies at a rally (for politicians) or in their news broadcasts and op-eds, then they're just as guilty as the poor, deluded and hyper-gullible fools they've misled.
Posted by Copernicus at 2:51 PM