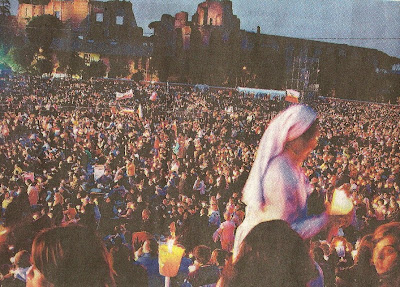 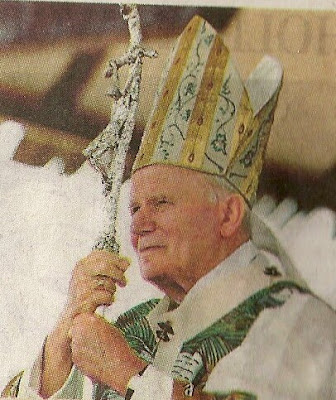 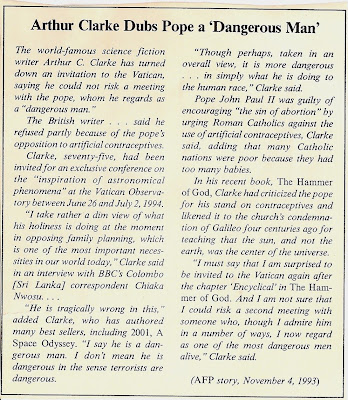 The unseemly haste to "beatify" John Paul II on the way to an unmerited "sainthood" is exceeded only by the mental feebleness and gullibility of millions in demanding ('Santo Subito!')this character be elevated to the top ranks of humanity. WHY? He most certainly doesn't deserve it, not least because he presided over more than 4,500 incidents of priestly pederasty as pontiff. Indeed, the fallout from those incidents, and the malicious moving about of the predators had to come from the highest reaches of the Vatican. That means the pope's responsibility, or as Harry Truman once put it: "The buck stops here!"

Yet some followers' brains are so benumbed one wonders if they suffer from some form or mental retardation or early Alzheimers. At least in those cases, they could be forgiven for their stupid thinking. As one Spanish nun- a Sister Maria Luisa Garcia - put it, and she's a classic example of what I'm talking about:

"I hope he didn't know about the pedophiles, but if he did it was an error. No one is perfect, only God!"

Probably in foreknowledge of this, his successor, Cardinal Joseph Ratzinger (aka 'the Rat') put John Paul II on the fast track to his specious sainthood once arriving in office. This way, a perfect PR front could be constructed to defend and ward off later attacks, especially abetted by millions of delirious saint-besotted faithful who'd lost all perspective.

And let's make no mistake, the alleged "evidence" for elevating this guy is not beyond reproach. The claimed "inexplicable healing" of Sister Marie Simon Pierre as a "miracle" definitely commits the logical fallacy of affirming the consequent. That is, asserting a priori that which you must prove. For indeed, this so-called "healing" may have well been due simply to natural remission, or pure coincidence in the remission and cure transpiring not long after the nun meditated on J.P. II. (As she claimed, but again we have no proof of that, only her anecdotal account. She may have well made it all up!)

It's all too damned neat and tidy to enable me as a skeptic to buy into it. It comes too close on the heels of the pedophile outbreaks and the benefits of positive PR arising from this sainthood march can't be overlooked. Meanwhile, I invite readers to check out the attached letter from the late author Arthur C. Clarke pointing to the pope as a dangerous man. When one thoughtfully considers the letter, I don't believe it's an exaggeration. Certainly demanding rigid adherence to a policy of no birth control (in population weighted nations), and thereby imposing massive destitution on them, is no virtue!

Not that I buy into any of the Sainthood stuff, but if any pope deserved it, Pope John Paul the FIRST did. He was most likely assassinated before he was in office for even 30 days. Why assassinated? Because one of the first items on his agenda was a full tilt investigation of the Vatican Bank and circulating rumors of money laundering for P2, and other organizations. Paul Marcinkus and Licio Gelli were to be among the first to face the new pope. But...he was conveniently murdered before any of this could come to be, or he could overturn the anti-birth control teaching.

Not surprisingly, it was from that point I committed to full industrial strength atheism. I haven't looked back since. Any religion that protects criminals, assassins and banking vipers is no organization with which I want to be associated.
Posted by Copernicus at 2:33 PM