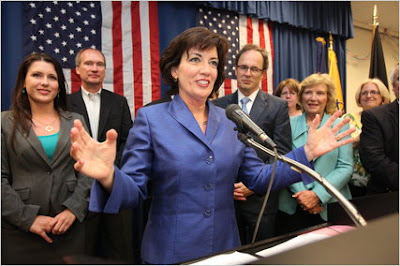 Well, who'da thought? Democrat Kathy Hochul, running on a firm pro-Medicare stance, bested the (much better funded) Reep candidate Jane Corwin by 47-43% in New York's 26th congressional district special election. The 'W' is being touted, as well it should, as the first major successful test of the pro-Medicare stance vs. the horrific Medicare voucher plan espoused by Paul Ryan and his fellow numbskulls. What this win should also do, is serve as a template by which to beat Repup heinie into oblivion next year, and perhaps take back the House, and amass an even wider majority in the Senate. The point? The Reeps overplayed their hand and now they need to be made to pay through their eyes, ears, nose, and any other place for their hubris!

Of course, it wasn't ten minutes after the declared win before the inevitable whining began. Paul Ryan himself accused Democrats of distorting his proposal, averring.

“If you can scare seniors into thinking their current benefits are affected, that’s going to have an effect. That’s exactly what happened here,”

But this is horse shit. The fact is that it's immaterial whether "current" benefits are affected or not. This was roundly exposed during the recent Easter recess during which Ryan took his dog and pony show around Wisconsin trying to win support. It fell like a frickin' lead balloon!(Often amidst many catcalls, and howls of derision, screams of 'Liar!')

The "plan" was roundly eviscerated in confab after confab held by Ryan in various venues. People in the assorted audiences, many who had actually run the numbers, asked Ryan pointedly how they were going to be able to afford to pay nearly two thirds of their own expenses out of pocket when many of their relatives were already struggling (in existing Medicare) to pay roughly 20%. Ryan had no answers other than to try the ploy of asserting that current seniors (55 and over) wouldn't be affected by the changes, only those who turned 55 by 2021.

But again, people were too smart for his palaver, and the attempt to split up elder interests didn't work. After some in the audience heckled him with cries of "Liar!" and "Bullshit!" others referenced how they didn't want their younger relatives (already having a hard time finding work for decent pay) to have this onerous monkey on their back. From then, you could see Ryan chastened and backing off.

The fact, still unable to be processed by the foolish, ideological Reeps, is that Ryan's Nazi-plan was dead in the water from the word 'Go!' - hell, even Newt Gingrich saw it! Anyone who's tried to obtain private health insurance when over the age of 60 knew the score. Private insurers simply weren't interested in insuring a group that was 5-6 times more likely to be ill or injured or need care than a 35-year old. Well, they weren't interested unless you could cough up LOTS of moola, usually $850 or more a month, plus pay a high deductible of $5,000/ year and sometimes more. This is what one would get under the Ryan Medicare "plan" and that was assuming no pre-existing conditions, unheard of for most over-60 years olds. Thus, Kathy Hochul's constant refrain during her campaign that: "Hey, they just hand you $8,000 to buy insurance, then send you on your way with a 'Good Luck!'", is spot- on. THAT is exactly what would unfold in the Ryan scenario and anyone who'd try to tell you differently is either a liar, an ignoramous or an idiot. Or maybe all three!

As Ms. Hochul noted, the advantage of standard government Medicare is that it mandates insurers MUST accept a person over 65 who is qualified (i.e. has worked at least 40 quarters, or disabled), pre-existing conditions or not. It also mandates certain price structures for operations, treatments, and keeps patient costs lower than would otherwise be the case. Even so, they're not insignificant. Starting from July I will have to cough up around $3,300 a year, and that is assuming no major operations or interventions. So it's not a freebie.

Yes, as I've written until blue in the face, there are ways to ensure Medicare's long term solvency, and they don't require draconian spending cuts - especially coupled with preserving atrocious tax cuts for the wealthiest like Paul Ryan wants to do. They require only moderate changes, like enabling the government to bargain for lowest prescription prices like the VA, or if that can't work, allow importing of lower cost Canadian drugs. And if PhRMA squeals like stuck pigs, tell them to fuck off. Also, one can eliminate the 'Medicare Advantage' plans which spend $12 billion more a year on average than standard Medicare. Further, the FICA limits can be increased to at least $250 grand, along with no more Bush tax cuts - for middle OR wealthy classes. All these in tandem can resolve the insolvency problem but they require Dems especially to make the honest determination and run with it, as opposed to falling into the Reeps' spending cut trap. If they're dumb enough to do that all bets are off!

Hochul's win is devastating to the repups but only if the Demos use it and don't find a way (next year) to yet again seize defeat from the jaws of victory. That means they not only must run on her same justified fear (of the Ryan plan) template, but ALSO have the heart and courage to define, articulate and embrace Medicare changes that don't depend on massive spending cuts. I already listed them above, the question is whether enough Dems will have the cojones to embrace them.
Posted by Copernicus at 2:51 PM