A Tale of Two Celebrations 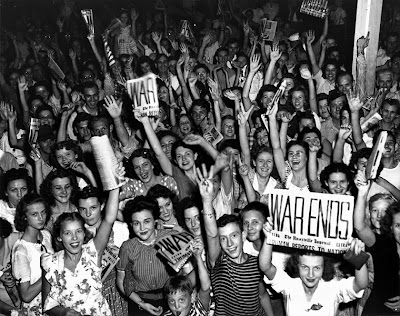 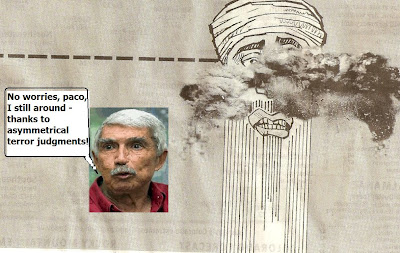 Nearly 66 years ago massive celebrations erupted around the U.S., with the center of focus capturing the crowd of hundreds of thousands in Times Square. Historically, one can look back on these and compare them to the assorted “flash” celebrations and histrionics that took place around the country yesterday, after the news of Osama Bin Laden’s killing by U.S. Navy Seals. My take on the two different celebrations? Well, let’s just say it follows the conclusion that this country’s performance expectations continue to sink to new lows (not the least because very soon, after the last Shuttle launch, we won’t even look to space at all as a venue for manned exploration – we’ll leave that mostly to the Russians, Chinese and others, opting for the 'small ball' of whatever efforts can be mustered by private investment. Maybe sub-orbital flights like Alan Shepherd's Mercury jaunt fifty years ago Thursday!)

In the first case, millions celebrated the demise of an entire Empire (See PHOTO) and an Empire that had also launched a dastardly sneak attack, killing nearly as many as 9/11 at Pearl Harbor on December 7, 1941. The end of that Empire followed:

- Nearly four years of brutal warfare and enormous sacrifice from all- by way of higher taxes (to pay for the war) and also rationing of food, fuel
- More than 300,000 Americans were dead at the hands of this Empire – killed in places as far reaching as the Philippines, Iwo Jima, Okinawa, and many other places.

Meanwhile, in the second case, Americans went wild with gyrations after the death of one lunatic madman, who didn’t lead an empire (like Japan’s) but served as a figurehead leader for a gaggle of robed disaffected terrorists, who had no navy, no armada of warships. no air force, no bombs and no standing army that matched the Japanese 7 million by the end of 1944.

Americans went wild yesterday and the evening before, after ten years during which:

a) They (e.g. those apart from military families) were called on to make absolutely no sacrifice say in higher taxation to pay for the effort to find Bin Laden and his loonies, or rationing of oil (which resource funds the same terrorists we professed to want dead with heads on platters)

c) They were oblivious to the loss of their civil liberties, becoming so blasé by 2004 that 70% of Americans in a poll couldn’t name even four of the rights listed under the Bill of Rights.

Now the question arises: who had more cause to celebrate? Those millions gathered to rejoice at the defeat of an Empire on August 14, 1945, or those in bloodthirsty high dudgeon two nights ago screaming in jingoistic elation at the death of one psycho (killed btw, after transgressing another nation’s sovereignty without any permission or notice), and which will not bring back a single victim of 9-11.

Any more than Bajans now mourn the death of the 73 souls blown to bits over their soil on October 6, 1976 in a terrorist act (detonation of Cubana Airlines Flight 455) that killed more proportionately (in relation to that little island nation’s population) than those 2,900+ killed in the U.S. on 9-11. Yet that terrorist responsible, Luis Carriles Posada, has been set free in El Paso, Texas by the U.S. judicial system rather than be deported to Venezuela to stand trial (Posada escaped with the help of confederates from a Venezuelan prison and then forged the plan to blow up the airliner over Barbados, with CIA-assistance).

In his autobiography, Posada thanked Miami-based Cuban activist Jorge Mas Canosa for the $25,000 that was used to bribe guards who allowed Posada to walk out of prison. Another Cuban exile who aided Posada was former CIA officer Felix Rodriguez, who was close to then-Vice President Bush.To make a long story short, Posada became the beneficiary of assistance of not only a somnolent, uninterested media (which expressed more outrage at the PanAm 103 downing in 1988) and a friendly Bush Junior Administration which engaged in lackadaisical immigration law nonsense instead of deporting Posada to Venezuela to stand trial as a terrorist.

Of course, this made a mockery of the Bushies' whole “war on terror” shtick and hysteria. Since, if you’re not going to go after the perpetrator of the most monstrous terror attack in the hemisphere prior to 9/11 then why would any sane person take you seriously about ANY terror attack? This reeks of selective definition of terror, or to use the words of one wit: "Well, the main question is whether he's one of our terrorists, or somebody else's?" Indeed! Justifiably, after a Bush-appointee judge barred Posada from deportation, Venezuelan Ambassador Alvarez accused the administration of “a cynical double standard” in the “war on terror.” He was absolutely flat out right! If states - any states- espect to be taken seriously on terror, then they need to apply uniform standards, not hold back out of political strategy or because one guy slaughtered 73 and another 2900-plus.

I was at Paradise Beach, on Barbados’ west coast when hundreds of the body parts washed ashore in bloody clumps, and scarlet waves, and it’s imprinted on my engrams forever. I beheld first hand the outcome of one of the most cowardly, dastardly deeds to transpire in the Western Hemisphere before 9/11, yet that terrorist mastermind has been let off Scot free.

Pardon me then, if I don’t exactly jump for joy over the death of Bin Laden, when a terror scum just as vile (proportionately) has cakewalked out of an El Paso, TX courthouse as thousands of anti-Castro Miami Cubans cheered his release and applauded, hundreds in the streets and thousands more in front of their radios, and TVs in Little Habana. See, e.g.:

A tale of two celebrations? You got it, and most of those celebrating in the latter one have no idea how lame they look- at least to me.
Posted by Copernicus at 8:27 AM