Three Cheers for the KJV on its 400th! 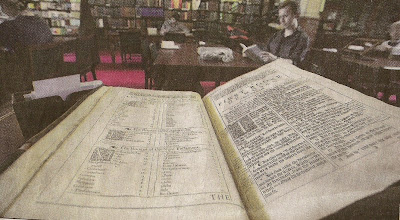 The putative anniversary of the inception of The King James Bible having just passed (May 2) it is well to acknowledge this masterpiece as perhaps the ultimate embodiment of the English language and hence even more a literary landmark than a religious one (which we'll get to in a moment). And make no mistake that you don't have to be a believer to appreciate it, any more than you have to be a believer in the tale of Odysseus (in the Odyssey) to appreciate that marvelous work. The appreciation comes independently, just from admiring a fine work of language.

Even Richard Dawkins, arguably the most formidable atheist of our era, has acknowledged as much, recently performing a reading from the Book of Ruth for a Youtube project, while asserting: "It is important that religion not be allowed to hijack this cultural resource". Indeed, and no more than religion ought to be allowed to hijack the fine art on display inside its many churches, or the exquisite music peformed in church venues! These are uniformly the property of culture at large, not the isolated province of religion.

But as one British academic has put it: "Other translations may engage the mind but the King James version is a Bible of the heart.". Or to put it in terms that my old Theology professor at Loyola University once phrased it: "Read the words and see how the book can excite the emotions! But always be aware that underneath the flowery verse are numerous errors.

How did this masterpiece of English literature come to be? James VI of Scotland, who came to be King James I of England in 1603, also had a keen interest in religion and commissioned an enclave of experts to Hampton Court near London in 1604, to arrive at a compromise translation to try to bridge the gap between the Puritans and the Church of England. (It was actually Puritan leader John Reynolds who proposed the new translation as a partial solution to the differences). Thereby the great task began!

The assigned objectives: the translation of the Old Testament from Hebrew, and the New testament from Greek, were undertaken and respectively assembled by no less than 47 translators in 6 committes working in London, Oxford and Cambridge. The final results emerged seven years later, in 1611.(The exact date when the first edition emerged is uncertain but many celebrate the anniversary on May 2nd).

An immense advantage conferred from the outset (and likely why the KJV outpaced all other versions) is that the King's printers had a monopoly on printing bibles. And so, by 1650, the KJV had driven the rival Geneva Bible totally out of the market. Who says that monopolies can't work, and that it's always better to have competition?

Back to the project: the translators were all instructed not to translate "church" as "congregation", and to preserve as much as possible the Bishop's Bible of 1568 (then the official English Bible). The translators were also granted wide latitude in how they specifically formed different translations of the text, in many cases being allowed to use the Geneva Bible and some other versions "when they agree better with the text" in Greek or Hebrew.

Another startling historical fact: What eventually became the "King James Bible" by 1526-30 was in fact NOT the original, but rather 75% to 90% adopted from William Tyndale's English New Testament, published in 1526. This version was actually published in defiance of then English law - so it is amazing so much of it was then incorporated into the original KJV.

Tyndale's tack (as my friend John Phillips earlier noted, see the Spiritual Master blog from the end of May last year) was to render Scripture in the common language of his time to make it accessible even to a humble plow boy. By basing his ms. on Hebrew and Greek texts he'd defied an English law from 1401 that forbade the publication of any English book without Church of England permission. Wise to the dangers, Tyndale conveniently went abroad while he was burned in effigy outside St. Paul's Cathedral (which I first visited in August, 1978, while in London, along with Hampton Court). They also consigned hundreds of copies of his New Testament translation to the flames. But, he got the last laugh, when a year after he was strangled for "heresy" in the Netherlands, King Henry VIII granted a license to a complete "King James Bible" that was more than three-fourths Tyndale's translation from his English New Testament.

Despite the current incarnation of the "standard" KJV not really being the original KJV, its best language was preserved. Thus, the (re-done) King James' Ecclesiastes with "a time to be born and time to die" (the basis for a rock song by the Byrds, 'Turn, Turn, Turn', in the 1960s) carries on. This eloquent passage was also one of several (includng the famous one from Psalms) read at my dad's funeral in 2009. As the Rev. Karl Pryzwala put it: "The language makes you sit up and take notice'."

Of course now, the Church of England which originally commissioned the KJV, permits many other translations. Its official doctrine is that all are relative and no one inheres the spirit of the work more than any other. Of course, no Anglican churches today, except perhaps the most extreme conservative in Africa, take their bibles literally. However, it is sad that - without the KJV - much educational thrust is lost on students today. Thus, without the background from that work, students are hard pressed to understand John Milton's 'Paradise Lost' or any of Herman Melville's dialogue from his novels. Worse, modern day African -Americans may not recall that the Rev. Martin Luther King's famous words, "Every valley shall be exalted, every hill and mountain shall be made low" was taken exactly from Isaiah in the KJV. Thus, though not to be taken literally, its words still serve as educational and literary ballast that ought to at least be exposed to more students today.

Finally, we end with a brief example of how a passage was processed by the KJV early translators. In each case the passage is given with its original source.


Of one thing we may be sure, the KJV - of whatever version- probably did more to spread the use of the English language than any other works, including of Shakespeare.
Posted by Copernicus at 11:25 AM