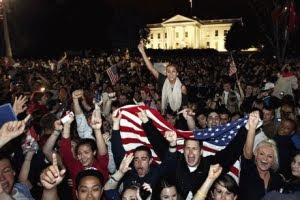 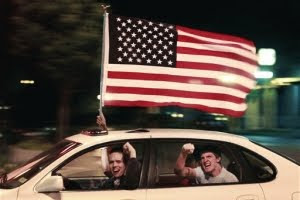 Before everyone does backflips over the demise of Osama Bin Laden, let’s keep in mind two things and regain a bit of perspective:

1) Bin Laden was created as a creature of U.S. policy when it suited American purposes after the Russkies occupied Afghanistan. Thus, delivering arms to Bin Laden and his mujahedeen assisted in the mission of harassing Russian troops, and in the end expediting their evacuation. That Afghan occupation also likely expedited the collapse of the former Soviet Union (given the resources squandered there) and ought to serve as an object lesson and cautionary tale for the current U.S. occupiers. Let’s also bear in mind the arms dispatched to Bin Laden, including RPGs and heat-seeking missiles etc., were then used in training jihadists after al Qaeda was formed.

2) Despite all the cheers and celebrations of Bin Laden’s death, Americans need to be reminded that a much more devastating threat to their entire nation and security remains. Much of this was highlighted in the recent TIME magazine piece (May 9, p. 34, ‘You Are what you Owe’) discussing how the Chinese could easily win nearly ever showdown with the U.S. right now – including over Taiwan- simply by the threat of selling off all $1.2 trillion of its Treasury bonds. As the TIME piece put it:

“The immediate impact would be ugly. As investors fled Treasuries the government’s borrowing costs would skyrocket. Some of the fleeing investors would take money abroad, so the dollar would plummet. And these first round effects would be trivial compared to the psychological impact which would rival that after the Lehman Brother crash and economic meltdown of 2008. A treasury meltdown would cause cardiac arrest in the heart of the economy”

Most people unfamiliar with economics might have no clue what all this means, and they’d be naturally inclined to be dismissive: “Oh, big deal! This is the worst? That ain’t even as bad as a nuclear strike!!”

But people don’t realize that global capital without containment or safe havens can be every bit as bad as a nuclear chain reaction that leads to an uncontrolled explosion. Indeed, as TIME observes, if the Chinese were to engineer such an “inverse” crisis – in which safe Treasurys become the source of economic conflagration “there would be nowhere to hide, nobody would trust anybody. When you hear that sober Wall Street types have stockpiled food and ammunition in hideouts in the deep woods, this is the Armageddon they imagine”

Why? As TIME’s author puts it, the past century has seen the ability of governments to be the guardians of secure banking systems because of stable capital flows. If these are destabilized then all bets are off. Governments will no longer be able to guarantee any holdings, whether those be your passbook savings account, a CD, certainly a treasury bond, a money market fund or account, and any investment. In other words, with total insecurity and absolutely no guarantees your money would become essentially unprotected.

People would soon realize this and there’d be a run on the banks similar to what we beheld during the Great Depression. Worse now, because the leverage ratios of banks are much worse (owing to lack of regulatory oversight) with some of them holding extended liabilities fifteen or more times in excess of actual holdings. Thus, if 3,500 descended on such a bank, say in Florida, to collect savings worth $1,000,000 in total, they’d be lucky to take away $70,000 collectively. The bank after such a run would then have to issue IOUs and you can imagine how far those would go in trying to purchase groceries, or fuel. (Of course, with no bond-bank support and government monies therefore in the crapper, there’d be no Social Security checks sent out, no VA benefits, and no Medicare bills paid. This goes without saying!)

Hence, the Wall Streeters packing their guns, ammo and supplies and heading to the “deep woods” because after all the supermarkets also run out of supplies (no longer any bank holdings to support payroll, deliveries, etc) people will be in search of whatever they can get to survive. When people haven’t eaten in a week or more, civil behavior will be the last thing to go and force of arms will become the “coin of the realm”.

The TIME piece also informs us that the depiction above could also be made much more devastating by any earlier default of the U.S. government, say incepted by failure to raise its debt ceiling. As Obama’s former chief economic advisor Lawrence Summers put it (ibid.):

Let us hope (even the Tea Party- obsessed Repubs)no one chooses to go this route, especially in the heat of political posturing or chutzpah. It would basically be like handing the keys to the weapons cache directly to the Chinese.

Yes, go ahead and celebrate Bin Laden’s downfall, but keep a perspective! Remember we armed and created this character in the first place and what he later became – a menace to our society – could be traced to those early actions which brought down the Russians, but also likely brought down our Twin Towers as well! Let’s also not forget that his criminal actions in 9-11 caused us to over react by launching two full scale military occupations that by their end will add over $3 trillion to our deficit – the same deficit that’s put us on a bond market precipice that may be used by the Chinese against us. In a manner of speaking, one could easily say he had the last laugh! He got us to spend ourselves crazy (now into massive, threatening deficits) by marshalling nearly all the resources of a superpower against a gaggle of robed lunatics!

And when all the cheering is done, and the flag waving ceases and after the confetti is cleared, just remember we have much more menacing threats to confront – as I outlined above. Be happy, be jubilant but don’t lose your sense and grounding in reality. When the Chinese- who hold 14% of all our debt- see and hear the chants of “USA! USA! USA!” on their CCTV, you can be sure they'll merely smile, like the gambler holding the final ace in the hole in a game of Texas Hold 'Em. And as columnist Glenn Greenwald put it in his recent salon.com piece:

"Beyond the emotional fulfillment that comes from vengeance and retributive justice, there are two points worth considering. The first is the question of what, if anything, is going to change as a result of the two bullets in Osama bin Laden's head? Are we going to fight fewer wars or end the ones we've started? Are we going to see a restoration of some of the civil liberties which have been eroded at the alter of this scary Villain Mastermind? Is the War on Terror over? Are we Safer now?

Only time will tell, but very likely, as with the answers to the deficit girdlock and upcoming debt ceiling, few latter day patriots will like the answers!
Posted by Copernicus at 8:31 AM