Is "MHD" a Short Cut for Solar Physicists? 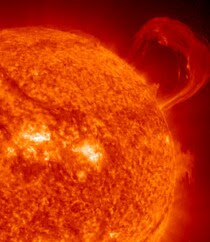 Most solar physicists work in what's called the "MHD" or magneto-hydrodynamic regime, which numerous plasma physicists have criticized as "taking the easy way out". But is it really? For example, treatments based on the analysis of the indigenous magnetic fields currently occupy a predominant role in analysis of energy stored in sunspot regions. The majority of these are based on MHD (magneto-hydrodynamic) theory wherein low frequency, long scale length and quasi-neutral (electric charge) assumptions are introduced into the plasma physics. Such assumptions lead to a basic set of what we call "MHD" equations, which include:


In truth, MHD does represent the end product of successive information loss in the transition from Vlasov theory to two-fluid theory to one-fluid theory and thence MHD. But is the criticism that MHD is "oversimplified" valid in the solar case? Let's first look a bit at the key condition: whether a magnetic field is frozen in or not. Whether a given field is "frozen in" will depend on the magnitude of what is called the “magnetic Reynolds number” (R_m) If R_m >> 1 then diffusion can be ignored, and we have the frozen –field condition and MHD.


where L is a typical length scale for the particular solar environment, V_A is the Alfven velocity and q(m) is the magnetic diffusivity or:

where the Coulomb logarithm is:

Then the magnetic diffusivity is:

which is a typical value for the conditions referenced, and shows the magnetic field to be frozen into the plasma. Hence, MHD is a valid approach!

Apart from this, the most conspicuous agent of solar plasma containment and topological change is the coronal loop – which is fully consistent with a low beta-plasma regime- since otherwise gas kinetic pressure would predominate and the configuration would be ‘open’(Note: beta = (½ rho v^2)/ B^2/2u where rho is the fluid density, v the fluid velocity, B the magnetic induction and u the magnetic permeability of free space.)

With this little exercise, we see that the solar physicist is more than amply justified in employing the MHD approach. Indeed, for most applications for assessing sunspot regions, say, two fluid theory would be far too complicated while achieving little additional insight.

If one is determined to go the 2-fluid route the approach is straightforward: simply take the original MHD equations and treat them as if for two separate fluids (ions and electrons) instead of one. Then the first, or charge conservation equation would become, for example:

where the subscripts (e,i) alert the user to process the equations separately for electrons (e) and ions (i). Is all the extra work worth the information or information quality gleaned? The user would have to determine that for himself in the context of his problem, analysis!
Posted by Copernicus at 8:55 AM