Food Wastage: A Travesty for a Soon-Starving World 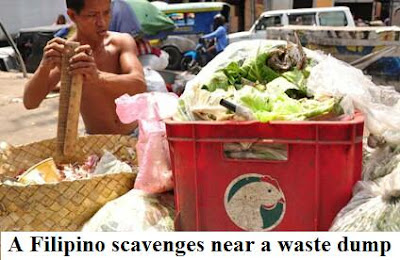 In the blog before last, I specifically highlighted the matter of bio-productive output and noted that the disparity in hectares consumed per national (9.5 hc for the average U.S. person, vs. 0.5 hc for a Rwandan) means that the effective carrying capacity of the planet is vastly reduced, to about 1.5 billion. This can't be increased unless the outputs are addressed and corrected. (Note: a carrying capacity out of balance with population will always show up in terms of massive inequities in resources, specifically food access and potable water.)

Now a new report on food wastage throws more light, noting that nearly one third of the world's food is wasted annually, according to a study released on Wednesday by the UN Food and Agriculture Organisation (FAO).

Roughly 1.3 billion tons of food is either lost or wasted globally due to inefficiencies throughout the food supply chain, says the report, based on research by the Swedish Institute for Food and Biotechnology. Amid rising global food prices, the study says that reducing food losses in developing countries could have an "immediate and significant" impact on livelihoods and food security in some of the world's poorest countries.

According to the report, industrialized and developing countries waste or lose roughly the same amount of food each year – 670 million and 630 million tons respectively. But while rich countries waste food primarily at the level of the consumer, the main issue for developing countries is food lost due to weak infrastructure – including poor storage, and inadequate processing and packaging facilities that lack the capacity to keep produce fresh. Food losses mean lost income for small farmers and higher prices for poor consumers in developing countries, says the study.

The average European or North American consumer wastes 95kg-115kg (209- 253 lbs.) of food a year, above all fruits and vegetables. Much of this waste is because of pure laziness, or not keeping track of foods purchased. Rather than tagging salads or vegetables that are put away, many Americans just toss them in the crisper and forget about them, only realizing they are inedible when it's too late, and they're converted to a slimy mass of pulpy rot. A little more care would prevent this cavalier approach and we need it to begin before Peak Oil strikes, which will surely cause food prices and critical commodities to soar, for many it will make basic foods unaffordable.

In contrast, the average consumer in sub-Saharan Africa, south Asia or south-east Asia wastes only 6kg-11kg (13 - 24 lbs.) The study notes that in developing countries poverty and limited incomes make it unacceptable to waste food, and that poor consumers in low-income countries generally buy smaller amounts of food at a time. (This is actually a very good approach for N. American food consumers as well, and one I learned while a Peace Corps volunteer in the West Indies).

Looking for solutions, the report argues that reducing reliance on retailers such as big supermarkets could help cut food waste in the north, and suggests promoting the direct sale of farm produce to consumers. It also encourages retailers and charities to work together, to distribute unsold but perfectly edible food that would otherwise go to waste.

For developing countries, the study says the key lies in strengthening food supply chains, urging investment in infrastructure and transportation, along with increased attention to food storage, processing and packaging.

While world food prices fell slightly in March this year – after eight months of successive increases – the overall cost of food in April was 36% higher than it was last year. Prices of wheat, maize and soya reached levels last seen in 2008, when a global food crisis sparked food riots across the developing world. Last month, the World Bank said that rising food prices had pushed 44 million more people into extreme poverty, and the World Bank president, Robert Zoellick, added that an additional 10 million people could soon fall below the $1.25 a day extreme poverty line unless immediate action was taken to increase the supply of food.

But the FAO-backed report says: "Food production must clearly increase significantly to meet the future demands of an increasing and more affluent world population … In a world with limited natural resources (land, water, energy, fertiliser), and where cost-effective solutions are to be found to produce enough safe and nutritious food for all, reducing food losses should not be a forgotten priority."

The problem is that increasing food production will not be much use unless massive food wastage is cut. Certainly wasting up to one-third of the food output, means that to keep pace, food production must be increased by 33% each year. Otherwise, there is always a net food loss, which will soon see many millions of starving people, especially as Peak Oil creeps in. It is also arguable that the global population is becoming "more affluent". As critical resources are used, as Eco-Economist Herman Daly has noted, the global population is really becoming less affluent because once the finite resources are gone (especially water) there is no way to compensate. Once Peak Oil hits and oil reaches $400 a barrel it will be all over but the dirges. See more at: www.dieoff.org
Posted by Copernicus at 10:44 AM