In Memory of a Real Warrior, and Father 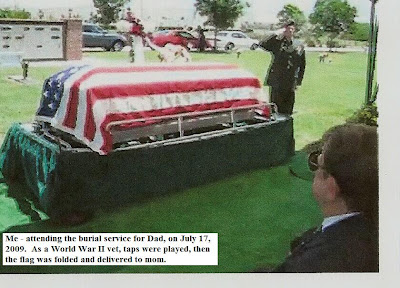 Two years ago my dad, a World War II vet, passed away from pneumonia. Today, he's remembered for not only his war service (36 months in the Pacific Theater) but also his steadfast raising of a large family. Dad's military combat was waged on two fronts: against the Japanese Empire in the Phillippines and New Gunea on the one hand, and against malaria on the other - with no fewer than five hospitalizations.

Even on being discharged from the Army in April of 1945, the after effects of malaria remained and he'd often come down with severe chills. As we know, the malaria parasites are never finally eliminated but stay in the bloodstream over a life time.

As I recall Dad's sacrifices today, I also recall two of the last contacts I had with him, one in April of 2009 (in which he sent his last email from his email machine) and then for Father's Day, on the phone in June, 2009.

His email (of April 19) lamented that his youngest son had 'gone off the rails' into hardcore fundamentalist Christianity and his I-Net church website was thrashing others in the family by use of a false self-righteousness. He expressly deplored the attacks he'd seen against my sister, as well as my mother, and to a lesser extent the de facto attacks by implication against him. He regarded ANY attacks against Catholicism as attacks against his own beliefs (especially as he'd converted to Catholicism from being a Southern Baptist).

His final hope, at the end of the email, was that my hardcore fundie bro would give it a rest and realize that life is too short to "carry on" waging crusades even in the name of trying to "save" others. He himself seemed to finally realize and appreciate that salvation is a relative thing, and possibly for that reason, refused to condemn his fundie son to Catholic Hell for abandoning the religion in which he was raised. In the end, each will believe as he or she sees fit, and all efforts to undermine, shame, or intimidate others into one's own fold are doomed to failure. All one really accomplishes is alienation, hatred and further isolation. His one wish was that if he did pass away, we'd come together as a family not pull farther apart via false causes, agendas or beliefs.

In my last contact with him on Father's Day, his voice was rasping and he appeared to sense the end might be near. We talked briefly about my latest book project, on the Kennedy assassination, and I mentioned that I had dedicated it to him. He expressed thanks and said he hoped he might get to see one draft. Alas, he passed before it could be sent to him.

These days, especially around Memorial Day, and near his birthday (May 25) I often find myself going back to read his old emails from 2007-009 which I have kept stored in my 'old' email folder. None of them are very long, except the one from April 19, 2009, when he expressed the hope that a son would soon find his way back to the light and family solidarity. The others were mainly recollections about past events, and current ones. In one, he inquired after my wife Janice's health and gave some advice on car repair after my wife was involved in a serious car collision in central Colorado (hit broadside by a reckless driver who went through a red light). In others he recounted assorted celebrations, including the most recent - for Xmas 2008 at the Port Charlotte Retirement Center, into which he and Mom moved three years earlier.

Dad, who provided the center of gravity for the family (always sending out the greeting cards for each and every member) will be sorely missed. But always remembered, especially - on this day - for the extraordinary service he gave to his country.
Posted by Copernicus at 8:56 AM