The GOP Has Totally Detached from Reality! 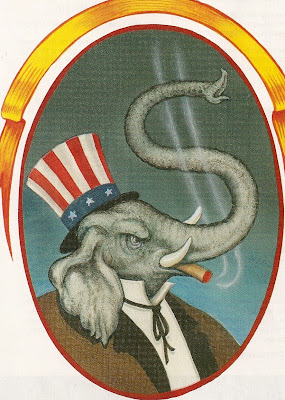 Two items appearing in the news in the past week disclose the party of Lincoln, once proud and standing on principle and the nation's welfare- now stands for nothing but crass self-interest, and ideology. The items and the GOP reaction show that if this vile party ever gains control of the levers of power again, we are all for the high jump, whether most Americans recognize that or not!

The first item concerns the vote to be taken this evening in the House of Representatives on whether or not to raise the debt ceiling. Never mind that in all the decades past this was an automatic, routine decision. No one, no party or person of power in his or her right mind wanted to see the U.S. effectively made to appear as if in default. Not even a remote "cosmetic" default, which is what the Reeps are claiming this vote amounts to, since Treasury Secretary Timothy Geithner has extended the actual deadline to Aug. 2 by being resourceful in terms of government spending.But rather than wait, the Goopers want to hold their vote two months in advance, for what....well, political posturing! Certainly not reality!

Their claim is they are the party of "responsibility" because they have proposed massive cuts to Medicare (via substituting a voucher system for actual government payments) while the Dems have proposed nothing similar. But this is a false dichotomy set up only for the benefit of the weak-minded, the gullible, and those not paying attention. Unsaid, especially by the Repukes, is that the Republican budget plan actually INCREASES federal deficits by $5.4 trillion over ten years! It does this by not doing squat about military-defense cuts (current military spending is nearly 5% of GDP prompting one former defense analyst (Chuck Spinney) to assert it amounts to a "war on Social Security and Medicare") even as it allows the wealthiest 1% to continue receiving their Bush tax cuts- equal to one new Lexus each year, on average!

Nowhere in any of the Repuke "solutions" or manifestos is there any faint mention of the one thing that would solve the nation's deficit problems most expeditiously: increasing TAXES! Indeed, the Repukes have all signed "loyalty oaths" (compliments of anti-tax zealot Grover Norquist) that absolutely resists any plan to raise revenue by taxes. If the country were analogous to an overspending family with the 'wife' (repukes) mainly using up credit lines on credit cards, then the comparison would be the wife's refusal to work to earn more $$$ to pay for the credit, and instead vowing to cut the family's food, utility and medical budgets! How long do you think such a wife would last before being chucked out on her ass by a responsible hubby? Yet in our country, the Repukes are treated as if they're the next thing to financial wizards and sober stars!

Of course, part of the blame for this atrocity must go to the Democrats in congress and the Senate. A more pliable, spineless bunch of weenies and wusses I've not seen in a while. Not only have most now agreed to vote with the Repukes on negating an increase in the debt celing, they are actually talking of making or increasing future cuts instead of demanding the Reeps include higher taxes as part of deficit reduction! Indeed, the word from the Denver Post article this morning (p. 5A, 'Republicans and many Dems oppose Bill')is that:

"After the vote fails, the focus will return to a bipartisan group of six congressional leaders who have been in private talkes with Vice President Joe Biden to come up with a massive spending cut package and allow the debt ceiling to rise"

Can't the Dem knuckleheads and poseurs understand that as Norquist himself once put it, "Bipartisanship means Democratic date rape to us Republicans!" and that by playing on this losing wicket they are unwittingly ceding the field and advantage to the Repukes? As opposed to demanding from those R-shit heads that they include TAX HIKES in any deficit reduction package? I mean this is a no brainer, or ought to be! There simply can't be a workable package that doesn't include tax increases! Allowing the Reeps to dictate puts all the Dem strategy into the proverbial crapper as well as ceding gravitas on the means for deficit reduction - which the idiotic corporate media will surely get wet dreams over.

How many fucking times must I cite reams of evidence that shows simple spending cuts can't work? I have cited examples from sources (e.g. Financial Times) in so many blogs now, it makes my head spin to recall them! As one Brit economist put it: "Claiming you can solve a deficit problem by using only spending cuts is like saying you can cut off your foot, and you will run faster!" - yet that's the detached reality we are left with because the weak-kneed Dems won't come up with their own solutions. As I wrote earlier, two of the best solutions for making Medicare solvent are allowing it to bargain for lowest prescription drug prices, like the VA does, and eliminating Medicare Advantage plans - which were set up in 2003 precisely to bleed the standard program into insolvency! Yet not one fucking Dem I've seen or heard has mentioned either of these, leaving me to believe they are kowtowing to some corporate interest or other, mostly likely Big PhRMA.

As to the other reality detachment, that concerns the denial of climate change- global warming, now part of the mantras of all the GOP's illustrious contenders for the presidency. This, despite the fact that many of them actually had proposed changes to policy before getting into the race. But now, as with Newt Gingrich, all that matters is reality be sacrificed rather than upset the mindless Gooper-conservo masses, who only watch FAUX News and read comic books. Nevertheless at least one Republican has the right take, former NY Rep. Sherwood Bohlert who noted:

Bingo! And this despite the fact the evidence is now overwhelming that the whole ice shelf of Greenland has been so affected by melting it's on the verge of collapse. (See: Greenland Poised on a Knife Edge, in The New Scientist, Vol. 209, No. 2794, Jan. 2011, p. 8) The article notes that just the 'break off" at the margins of the sheet, which is ongoing, is adding 300 gigatons of melted ice to the oceans each year. If the whole shelf collapses, it will raise global sea levels by 7 m (23. 1'). Are any of the GOP's idiot candidates paying attention? Including to the fact that the acidity of the oceans is already 30% higher than at the start of the Industrial Revolution? I doubt it!

Sometimes, when I get this frustrated, I think that humans don't deserve to survive if they are so incapable of stewardship. At least so many. But then I do bear in mind that many are still fighting to make things right, and not just allow the knuckle-dragging buffoons and their lackeys to prevail. I just hope there are more of the former left than the latter despite a recent poll showing only 49% of Americans now believe effects of global warming have begun, compared with 61% in 2008. Are the knuckle-draggers and dummies winning? Stay tuned!
Posted by Copernicus at 8:59 AM