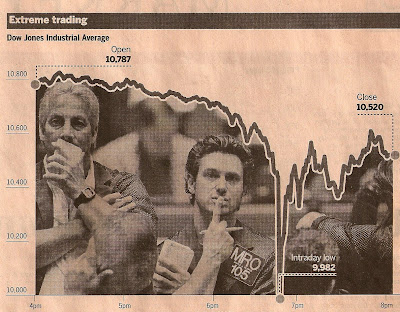 Just over a year ago, over May 5-6, 2010, there occurred the worst short interval market dump in history, with a drop of over 600 points in the DOW in just under an hour. The incident, blamed on high speed computers using algorithms that can buy and sell millions of shares in heartbeats, was dubbed "the flash crash". The event stunned many investors, sent small time mom & pop types fleeing the stock market forever and revealed gaping holes in the equity markets.

Which introduces the question: Have things finally returned to normal? Can little guys get back into the market again without being skinned alive, and will people be able to put aside fears it will ever transpire again? Well, the good news is that the incident spawned more attention by regulators (like the SEC) and some new rules. The bad news is that irrespective of those safeguards, the market remains highly vulnerable to bouts of sudden selling, and the DOW could suffer a repeat of what occurred last year - this according to a May 6 Financial Times piece ('Flash Crash Fear Lingers Despite New trading Controls').

This isn't surprising because the new regs and rules still assume time intervals of a classic nature (in minutes at least) rather than the drastically reduced intervals obtained using high speed computers that can turn over terabytes in less than an hour and use fancy-dancy algorithms to sell and buy back over ten million shares before Joe Schmoe can find his shoes in the morning.

So, as for small fry investors, they had best steer clear of the stock market as I've always advised them. And for god's sakes don't listen to bunkum that appeared, for example, in a recent issue of Smart Money, claiming people with higher IQs on average place their money in the stock market, as opposed to fixed investments. That bit of drivel doesn't take into account low market performance coupled with high risk over the long term (for the past ten years the S&P 500 has barely made 1.4% or less than what a CD would earn), as well as inbuilt fictions which predispose too many to put money in investments they don't understand. Bottom line is that sure, high IQ people may well put more money into the stock market but that presumes that the money they do put in they can afford to lose in a rapid downturn. If they can't afford to lose that money, say 40% or more of a 401k, then clearly it's not a "smart move"!

According to James Angel, associate professor of finance at Georgetown University (FT, ibid.):

"We will have another flash crash, yes, without question! The combination of human nature, markets and technology means that at some point, something will misfire."

Which isn't at all surprising because since time immemorial the shark investors have been trying to get the better of small fry. For example, in the 1920s, big outfits on Wall Street invented the infamous 'investment trusts' by which millions of ordinary folk were told they could partake of the market like Big Time capitalists such as the Rockefellers. All they needed was 'seed money'. What they weren't told is that the big investors were able to control the volume and types of shares sold, as well as timing the selling, redemptions so even before they put their first $100 bucks into one of these trusts the game had been rigged. Not surprisingly, hundreds of thousands lost everything but the shirts on their backs. Have ordinary people, small fry types, learned anything from the past? Are they even remotely aware of it? Not really! Once the siren calls from the wagging tongues of the blow-dried money pimps on Business News outlets begin, millions forget the past and charge in eager to get scoured again.

Since the May 6 flash crash, the SEC has acted to install "circuit breakers" which deliver "time outs" during particularly heavy trading periods. These time outs are intended to prevent the wild gyrations that occurred last time. Soon to be added to these will be "limit up" and "limit down" rules which are intended to reduce systematic risk by capping the volume of shares that can be sold off, or redeemed in given interval of time. The SEC also plans to implement an "audit trail" to dtect disruption, but the viability of that remains to be seen. the most that expert observers can agree on right now is that all these rules in concert will merely prevent a duplication of the last flash crash. They won't collectively prevent a totally novel scenario. In this sense, the SEC's rules are somewhat akin to our current generals in the Pentagon still "fighting the last war" with massive, deficit spiking manpower, air power etc. when a smarter, stingier approach is called for that doesn't use up so many resources.

Perhaps a better tack is to have computer experts at the SEC actually look into the algorithms and programs that implement massive flash trades. Maybe do essential line by line checks to see what is going on in the innards of these programs. But, of course, such a move will require more employees (working for the government in a regulation capacity no less) and the Republicans with their budget cutting knives out certainly won't tolerate that. So, I guess they will tolerate more small fry getting screwed out of their money, to "save money" (for their wealthy benefactors, liek Peter G. Peterson)
Posted by Copernicus at 10:14 AM