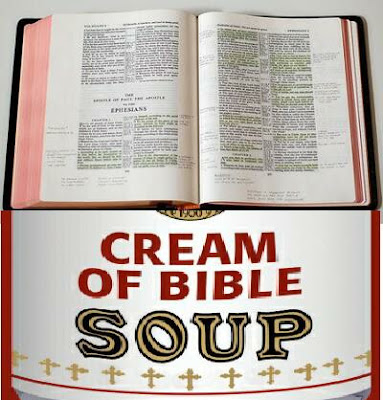 It's absolutely ludicrous as well as hilarious to behold certain fundies going off on the Quelle or Q source tradition (e.g. as "Satanic"), while they accept a bible (KJV) that has absolutely NO objective validation as any unique, sacred source! One just has to scratch his head in wonderment and awe at the chutzpah it takes to readily ignore the immense deficits in an entire BOOK, while carping at a coherent assemblage of Yeshua's sayings that is claimed to form a commonality of source for at least two of the NT gospels (Matthew and Luke).

As noted in my earlier blog (before the last), textual analysis by all reputable sources recognizes Q as a putatitive collection of Yeshua's sayings which doesn't exist independently (e.g. as a specific text) but rather can be parsed from the separate gospels, such as Mark. Germane to this Q tradition, is how - when one applies textual analysis to the books, gospels- one can unearth the process whereby the orthodox (Pauline) Church worked and reworked the sayings to fit them into one gospel milieu or another.

None of this is mysterious nor does the basis require any "objective proof" (a real howler since the whole historic process of biblical book selection and compilation has been subjective!), since the disclosure of the Q (which as I indicated is more a TRADITION than explicit text)isn't based on a direct, isolated manuscript but rather distilled from the comparison of numerous similar passages in differing NT sources. Thus, one can employ this template to derive a plausible timeline: for example, The Gospel of Mark appears to have committed the sayings to paper about 40 years after the inspiring events, then Matthew and Luke composed their versions some 15-20 years after Mark. ALL SERIOUS biblical scholars accept this timeline, only hucksters of holiness, pretenders and pseudo-scholars do not! Again, I advise those who wish a genuine scholarly insight, as opposed to pseudo-insight, to avail themselves of Yale University's excellent Introduction to the New Testament course by Prof. Dale B. Martin. Of particular import is his lecture: The Historical Jesus

Which clearly shows the editing in John to make it conform to orthodoxy. Now, the choice before people is whether to accept the basis and findings of a highly accomplished scholar in the field, teaching at one of the nation's premier Ivy League universities, or the word of someone belonging to an online bible school with an "I-net" church. I think the choice is a no-brainer, but then that is writing as one who's actually taken a real course in textual analysis (including languages used in translation) from a real university!

But let's get back to the blind spot inhering in these Q-tradition carpers, which I also exposed (to do with their King James Bible) in the blog before last. As I showed in that blog, their accepted KJV fails on all three critical tests for authenticity:

a) no major re-translations or re-doings,

b) no major omissions or deletions,

c) a consistency with what the earliest original (e.g. Greek) translations (say in the Greek Septuagint) allowed, with no major contradictions.

As I showed, the current KJV failed criterion (a) by being a compromise translation to try to bridge the gap between the Puritans and the Church of England. Thus, two distinct translations, call them X and Y, were jury-rigged to give some mutant single translation, call it X^Y, belonging to neither. It's something like taking the head of a cow and grafting it onto a de-capitated bull and saying you now have an authentic cow-bull. Actually it's more like cow bullshit!

Making matters worse, the translators were told to preserve as much as possible of the Bishop's Bible of 1568 (then the official English Bible). The translators were also granted wide latitude in how they specifically formed different translations of the text, in many cases being allowed to use the Geneva Bible and some other versions "when they agree better with the text" in Greek or Hebrew. This "mixing and matching" process is believed by many experts (e.g. Geza Vermes) to have been responsible for many of the more blatant contradictions that have emerged, viz. in answer to the question posed 'Are unsaved sinners eternally tormented?:

This is a huge divide, and a serious blotch on the integrity of the KJV. Indeed, if such a fundamental question as "eternal torment" can't be properly addressed, how many other shibboleths will one find?

Meanwhle, the current KJV fails test (b) because we know from historical records (kept by the Anglican Church) that what eventually became the "King James Bible" by 1626-30 was in fact NOT the original, but rather 75% to 90% adopted from William Tyndale's English New Testament, published in 1626. This version was actually published in defiance of then English law - so it is amazing so much of it was then incorporated into the original KJV! Tyndale's tack was to render Scripture in the common language of his time to make it accessible even to a humble plow boy. But this meant ignoring the originally published KJV and resorting to his own translations, basing his ms. on Hebrew and Greek texts. In so doing he'd defied an English law from 1401 that forbade the publication of any English book without Church of England permission.

Tyndale got the last laugh, because a year after he was strangled for "heresy" in the Netherlands, King Henry VIII granted a license to a complete "King James Bible" that was more than three-fourths Tyndale's translation from his English New Testament! Thus, the current incarnation of the KJV is not the original translation adopted by the commisson of King James I. Thus, the KJV also fails criterion (b).

What about test (c)? This was broken as soon as Tyndale's version was 75% adopted and the correlated parts of the earlier (King James I) ordained sections, removed. More to the point, the KJV rendering of Matt: 25:46:

"And these shall go away into everlasting punishment: but the righteous into life eternal"

disclosed a total inconsistency with the earliest original (e.g. Greek) translations! Here in Matt. 25:46, the Greek for everlasting punishment is "kolasin aionion." Kolasin is a noun in the accusative form, singular voice, feminine gender and means "punishment, chastening, correction, to cut-off as in pruning a tree to bear more fruit." Meanwhile, "Aionion" is the adjective form of "aion," in the singular form and means "pertaining to an eon or age, an indeterminate period of time. But it does not mean eternal!(Critical examination discloses the Bible speaks of five "aions", minimum, and perhaps many more. If there were "aions" in the past, it must logically mean that each one of them have ended!)

Thus, a 'pick as you choose' process for the creation of the KJV combined with inept and cavailer translations of the Greek Septuagint obviously allowed huge errors to creep in, and Matt. 25:46 is an enormous one, given it's the sole place that refers to "everlasting punishment". So if this translation is wrong because of a cavalier Greek translation (of kolasin aionion) then everything to do with it goes out the window. Thus, the KJV fails all THREE tests for validity for an authentic bible!

We suggest that before certain "pastors" launch into more tirades against the Q tradition, they examine more completely their own bowdlerized and maimed bible, which is somewhat like a Frankenstein "dog", put together from the excavated carcasses of about ten different doggie cadavers! And not even today's resident geniuses who worship this Frankensteined monstrosity as the "final entity" can even recognize which end is the head and which is the heinie! But hey, maybe as a biblical yardstick its "head" doubles as a heinie! Cream of KJV Bible soup anyone?
Posted by Copernicus at 11:31 AM