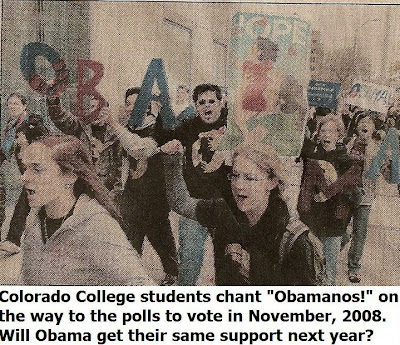 Politics and political strategy is often a complex tapestry composed of many elements, made more difficult by the fact that it must be acted out in fifty disparate states with different concerns, emphases, and predilections. Next year's for President Obama (to win the 2012 Presidential election) is no different, and despite the fact his approval rating has zoomed to 57% (on account of eliminating Bin Laden) a lot can happen between this year and next and the political landscape is littered with mines of all dimensions and types, from the fiscal to the state's rights local. Ignoring any of these can easily transmute what might be a winnable election into a devastatingly close loss, especially if the Dems are unable to hold onto the Senate.

Already we know that winning next year's election will pose a much more formidable challenge than the one in 2008, when Obama was largely an unknown quantity and all most people (especially the young - see image) knew was the bold mantra of "Yes we can!". Let's leave out the fact that Candidate Obama overpromised on a wide range of items, and this was definitely a risky thing to do (as Paul Krugman pointed out in one New Yorker interview a year ago) in the wake of the regressive Bush Residency. From not closing Guantanamo, to not eliminating signing statements, to not making a definitive pullout from Afghanistan (as opposed to merely "starting it" in July) to the well -known punt on the public option - or rather shunting it off for final decision to a committee run by the likes of Max Baucus and assorted repugs) Obama has shown far less stomach for "hope and change" than he originally broadcast throughout his campaign of '08. All of which likely cost the Ds turnout in the 2010 mid-terms as millions of young and progressive voters, uninspired and not energized, simply sat it out. The result was a Repug rout, though not because their message won the day, but because the Dem base was unmotivated (and Rahm Emmanuel's famous "morons" epithet in one infamous WH confab didn't help.)

But let's leave the past out for the time being. The fact is, like him or not, Obama is the last bulwark of defense against total Republican domination of the government. If the Dems lose the Senate, then the Reeps can claim congress in toto (which many say is very likely unless the Dems can capture Scott Brown's Massachusetts seat)making Obama's victory even more critical. Suffice it say, Obama MUST win next year's election come hell or high water!

As I said he faces a more formidable challenge because the base is much less energized, and also a group of states that went for him in 2008 (Ohio, Florida, Virginia, Indiana, North Carolina) now look to fall back in the Reep column with a loss of 86 electoral votes. This makes the "purple" state of Colorado (9 electoral votes) much more critical for Obama to take and perhaps be the difference between a narrow electoral win and agonizing defeat. Subtract the 5-state total of 86 electoral votes from Obama's win column (he had 365 electoral votes in 2008) and he ends up with 279. Only 9 above the needed 270 with the potential for a 269-269 tie, or 270-268 nail biter 'W' if CO is lost (factoring in other possible combos, including maybe retaining Indiana but losing Wisconsin). Clearly, in any event, Obama must have Colorado in his sights!

Thus, the question is: Why is Obama allowing elements in his administration to make this much more difficult for him? Given the vote next year already is likely to be razor thin in Colorado, why allow fed drug enforcement minions to disable the state's medical marijuana industry which is now providing jobs as well as modest revenues (in state taxes) for a number of communities, including in Jefferson and El Paso counties? This doesn't add up, and indeed makes no sense - political or otherwise- given what's on the line. Worse, The Colorado Springs Gazette in one editorial today, is calling attention to another Obama "bait and switch" tactic. See:


As the editorial notes:

"A pending federal crackdown on Colorado’s medical marijuana patients and wellness providers will destroy livelihoods, hurt the economy and cost Colorado Springs and El Paso County precious new tax revenues. The Obama administration is backing off its principled state’s rights approach to medical marijuana, just as it has abandoned other promises of hope and change.

Colorado voters amended the state constitution in 2000 to allow the buying, selling and use of medical marijuana. Today’s thriving medical marijuana trade, which has freed patients from underground drug dealers, didn’t take off until Obama took office and directed Attorney General Eric Holder to announce new formal guidelines for federal prosecutors in medical marijuana states. An Oct. 19, 2009 memo by Deputy Attorney General David Ogden told United States attorneys that they “should not focus federal resources in your States on individuals whose actions are in clear and unambiguous compliance with existing state laws providing for the medical use of marijuana.”


They go on to write:

"The memo represented a significant departure from the Bush administration’s refusal to acknowledge Amendment 20 and other state marijuana laws. It represented tangible change, brought to us by a president who promised change. Holder told reporters the new guideline was consistent with promises made by Obama during the campaign. One such promise: 'I would not have the Justice Department prosecuting and raiding medical marijuana users. It’s not a good use of our resources.” — Obama, at an Aug. 21, 2007 campaign event in Nashua, N.H.

Forget the promises and the instruction to U.S. attorneys. Medical marijuana is going the way of the pledges to close the Guantanamo Bay detention camp, to end aggressive foreign intervention and to undo abuses in the Patriot Act."

The editorial then goes on to quote U.S. Attorney John Walsh who (in clarifying the feds' stance to Suthers) wrote: the Justice Department plans to "vigorously enforce federal marijuana laws against individuals and organizations that participate in the unlawful manufacturing and distribution activity involving marijuana, even if such activities are permitted under state law".

This is exactly the wrong message to send to marginal or fence-sitting state voters who - though they may not use MMJ or MJ- firmly believe (in line with the state's libertarian stance- also endemic in the West) that people (once a state law has passed) ought to be allowed to use it within the scope of said state laws. Thus, one is left to wonder if these incursions against state interests are not coming from Obama's own people but entrenched Bushies who were never evicted from their positions (perhaps because of the difficulty in getting new nominations through). If this is not true, then at the very least one must ask why Obama isn't controlling these guys - and getting them to heave to? Is he then the commander-in-chief or merely a figurehead whose hirelings dictate his policy for him?

The argument that "political interests and strategy ought not affect law or its rule" also doesn't wash, since the suspected terrorist Luis Carriles Posada (who engineered the Cubana Flight 455 debacle on Oct. 6, 1976) was allowed to walk free in El Paso on a minor immigration charge (as opposed to being deported to Venezuela to stand trial there for his escape from a VZ prison), which some quarters have indicated was done to appease the anti-Castro Cuban community in Miami since Florida's 27 electoral votes are in play next year. Well, if political strategy defined that release (opting for trial on a petty immigration violation, as opposed to deporting the scum) and it looks plausible, then surely ordering the DEA and State Atty. Suthers to back off in Colorado is also in play. Why risk a bird in the hand (Colorado) for "two in the bush" (Colorado and Florida). Besides, with Reep Rick Scott in charge as governor in FLA, the odds are much less likely Obama can win that state anyway, as unlikely as he can take OH with John Kasich in charge (and we know, from 2004, these guys like to use Diebold machines to tilt votes!) At least in CO, Dem governor John Hickenlooper is in charge, but there's only so much Hoop can do if Obama isn't prepared to help his own cause!

The Gazette goes on to conclude in its editorial:

"Obama has shown his tolerance for rogue Justice Department employees who simply don’t approve of his “state’s rights” approach to medical marijuana laws. He appears too weak to force his U.S. attorneys to comply.

It’s a bait and switch that stands to devastate the lives of small-business owners, their employees, their investors and patients who trusted Obama and found a way off of destructive, liver-rotting, hard-narcotic pain medications. It’s a position that will only re-enrich and empower the criminal marijuana underground, which obeys no rules and pays no taxes.

This school of thought cannot be allowed to enjoy widespread acceptance by Colorado (especially young) voters, and Obama needs to act expeditiously to staunch it where it stands. If, in order to get his DEA to be consistent with his earlier (2009)promises he needs to dump former Bushie admin. fifth columnists out to pasture, then he needs to do that. The important thing is to not alienate or antagonize Colorado voters, many of them young progressives and students, who are foursquare on the side of its MMJ laws. The time is here and now to act with boldness, prescience and determination, because....as I said...those 9 electoral votes may well be the slim margin between victory and defeat come next November.

Beyond all this, anti-government toxins are already rife in the state as they are throughout the West, and having DEA freelancers come in full tilt and overturn state laws doesn't help to quell such sympathies. Indeed, it makes it immensely more difficult to convince voters of the government being a force for good, and the people's welfare, as opposed to Nannyist Dictators. As for the claimed ill effects of MJ these have never been proven to be even half as bad as the numerous serious side effects of most legal drugs on hand from Big PhRMA, including the statins, blood pressure meds, lamosil and many others - which indeed, are responsible for most liver and kidney transplant waiting lists in the country. But perhaps it is Big PhrMA's corporate clout with their 3500-odd lobbyists (which MJ backers lack) that protects them? Who knows? What we do know is that Obama can't afford to make any political miscalculations in Colorado!
Posted by Copernicus at 8:34 AM