So What Happened with the 'End of the World?' 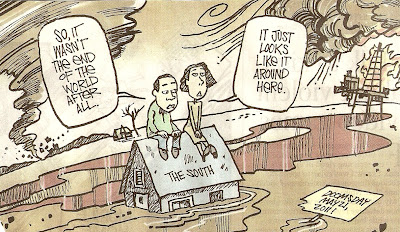 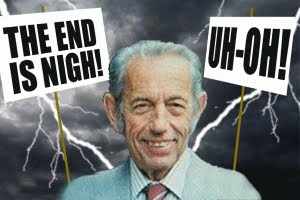 We sat around Saturday waiting for the "Judgment" but, alas, it never came. It was to commence at 4 p.m. our local time (6 p.m. Eastern Time) according to Harold Camping and his cult, but all we saw outside were some raindrops, a mild gust of wind and that was about it. So, yet another "end times" prediction, like Camping's previously one in 1994, goes into the crapper. When will the next one come forth? Will these nitwits now hang their heads in shame? I doubt it, as most religionists have no shame!

Now, many (especially fundamentalists) will miss the whole point of this inane non-event and hold Camping up as another "false prophet" or whatever. Of course, we KNOW Harold Camping is a nut, as the octogenarian numerologist wouldn't know a true forecast calculation from a confabulation. But, that doesn't make generic fundies any LESS nuts! Thus, holding Harold Camping out as a whacko or fruitcake, doesn't mean they are any less fruitcakes!

For example, both groups- Camping's screwballs along with the prototypical fundies- accept a non-biblical "Rapture". But as I noted this has no basis in the scriptures and was a confection instigated in 18th century Scotland. A 13-year old girl reported assorted night visions of people being levitated away. She referred these to a Scottish Minister who then expanded on them before going through assorted scriptures and finding as many specious references and citations as he could to retroactively justify the bogus concept. The whole sordid set of bunkum then acquired a life of its own and subsequently became almagamated into the most extreme forms of fundamentalist Protestantism. Today, this codswallop finds outlets in numerous places, conferring a spurious benediction, not least in Tim LaHaye's fantasy "Left Behind" series.

The whole eschatological-end times thingie is also a recent development. As Oxford Bible Scholar Geza Vermes has noted, the 'Parousia' has been around at least from the time of the earliest Christians. But the earliest renditions were not embellished with horror stories of Armageddon and destruction, but rather the simple re-appearance of Christ to support the belief he survived his death. After more than 100 years of no re-emergence, the original Parousia began to undergo re-evaluation, revision and rewriting to become something much more, with malignant overtones.

The way Vermes recounts it, is that having become so impatient with their Master's failure to return to Earth, Christ's followers soon began to see him as a vengeful Messiah not merely a 'returning from the grave' icon. Over the centuries, Christians of every stripe began to become immersed and heavily invested in End time sort of prophecies, especially based on Revelation, though anyone who had done scriptural exegesis and textual analysis knew that that book was originally a Gnostic text that had been re-molded into an orthodox format. Some of the Loyola Theology professors I had estimated as much as 45% of the original Gnostic text was omitted in recasting Revelation, and that meant that many of the symbols and imagery used (without the supporting context) would have little or no meaning. Even the meaning of 'the Beast' would be perverted, if the ancillary text was bowdlerized or removed.

Worse travesties awaited as portions and passages in Revelation were then linked up with the standard Old Testament text of Daniel, thereby marrying a partial Gnostic scripture to an ancient Judaic one, completing the transformation into eschatological scatology. Of course, we know human psychology will play into this, and people tend to see what they want to see if they look long and hard enough. Hence, if they find references to the "Beast" in Revelation, they will also find them in Daniel, as a basis to support what they already believe. Thereby digging the bunkum ever deeper. All such interminglings of valid whole texts, and partial ones that have been re-worked, are largely responsible for the "end times" nuttiness.

Yes, Harold Camping is a purblind, certifiable nut. But no one who thinks the "Judgment" will one day come, "Armageddon" is real, and that the "Rapture" is a precursor escape hatch for the righteous ought to pat himself on the back as being superior to Camping. To me, he or she is just as batshit crazy and clueless as he is! Maybe even moreso, because while they keep harping on the "end of the world"- even writing numerous books and making films about it- they don't even have the courage to give a single prediction! They do it purely out of instilling a constant sense of fear and dread to try to intimidate others into their fold, when if a future date isn't really known they'd do better to shut up until it is. THAT they do not, however, is precisely the sign of real psychotics!
Posted by Copernicus at 7:27 AM