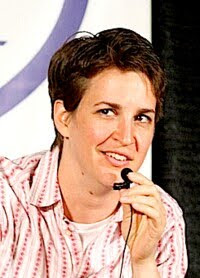 Last night's 'Rachel Maddow Show', certainly the first part, was one in which any person with neurons had to sit up and take notice. With deft skill and citations from sundry resources, including the Congressional Research Service, Maddow showed in devastatingly comprehensive form how Osama Bin Laden may well have had the last laugh on us all, even as we lurch toward a possible government bond default with a failure to raise the debt ceiling and "blood in the streets"(to use the words of former WY Senator Alan B. Simpson).

Maddow showed, using assorted news releases, past documented video quotations and third party reports how we've all likely been had in a classical 'rope a dope'. While we had our eyes and minds focused on the DEATHS brought by Bin Laden from his terror attacks, we lost sight of his hidden goal: to bring the whole American Republic to its knees by making it spend itself into oblivion. Which is damned near what we have succeeded in doing, by erecting an entire security -defense establishment (much of it contracted out) in addition to an expanded military -industrial establishment.

According to Maddow, in her introductory remarks:

"When we think about Bin Laden we think about murder, mayhem and perverted, pseudo-theology. But Osama Bin Laden himself always thought about money. Money was always how he explained what he was doing, and what al Qaeda was up to. One month after the September 11 attacks, gave an interview to Al Jazeera in which he said, quote:

"The losses on Wall Street amounted to 16 percent, and they have said this was a record loss that had never happened in the market's history in 230 years. The capital in circulation in this market amounted to $4 trillion. If we multiply 16 percent by $4 trillion to find out the losses their shares suffered, that is $640 billion. This is what they lost in one hour. The national income in the U.S. is $20 billion.

Bin Laden, in Maddow's quote from Al Jazeera, then goes on to brag about the hidden economic costs latent in the "psychological shock" after the attacks on the Twin Towers and Pentagon, and how many people weren't able to work for a week. He also mentions layoffs in the airline and hotel industry and the impact these had on the economy.

In the further expatiation of his 2002 interview, Bin Laden doesn't brag about the death toll or buildings destroyed but rather that his "great victory in the 9-11 attacks is that they cost the U.S. more than $1 trillion."

Maddow then plays the infamous Bin Laden video that emerged just on the eve of the 2004 U.S. presidential elections. In this video he's heard to state

"Al Qaeda spent $500,000 on the attacks but America in the incident and the aftermath spent more than $500 billion"

So even three years after the horrific events, Bin Laden isn't bragging about the deaths or physical damage inflicted but the financial costs to the country. Obviously, as Maddow points out, this is where his head and major purpose is, though Americans always believed it was about death, destruction. Which, on the face of it is not terribly surprising, since Americans struck by a sneak attack on the proportions of 9-11 would inevitably be monopolized by death tolls and devastation rather than any economic undercurrents or objectives - which most don't grasp that well anyway. Talk to most Americans about the decline in stock share prices after the attacks, for example, and their eyes glaze over. But this is their basic mental blind spot and why they missed the forest for the trees- missed Bin Laden's actual (long term)aim for the immediate savagery of the attacks.

As Rachel went on to say
:
"For us, what looked like nihilism was to Osama Bin Laden economic and economically rational"

Bin Laden's own words gave his primary purpose away at the end of his 2004 video, as played by Maddow.
:
"We are continuing the ploy of bleeding America to the point of bankruptcy

He's then heard to refer to the estimated costs of "more than $ 1 trillion" to that point and that "the real loser is you...the American people". This take has been supported by a recent Washington Post analysis by journalist Ezra Klein, who writes
:
"For Bin Laden, success was not to be measured in body counts. It was to be measured in deficits, in borrowing costs, in investments not made in our country's domestic economic strength."

Which is more than true, since right now serious politicos are talking about not only not spending a dime to repair decaying infrastructure, but cutting out or reducing the primary health program for older Americans ...to nothing. And even before that, the U.S. punted on space exploration, pulling back via budget cuts to settle for being mere passengers on Russian craft to get to the Space Station. And THAT they intend to allow to burn up on orbital decay and re-entry ca. 2014 rather than investing money to preserve it, get it to a safe altitude! A damned shame! I said before and say again, this is pathetic and discloses lack of future vision. But from Maddow's piece, it is also a further sign of the ultimate 'W' for Bin Laden, though we brag we've disposed of his dead body. Maybe, but the effects of what he's perpetrated remain, and we're playing right into this devil's hands - even as he rests at the bottom of the Adriatic.

Maddow then shows graphs comparing our deficit just before 9-11 and currently. The former stood at $6 trillion, and it now stands at just over $14 trillion. At least $4 trillion of these deficits arrived from the occupations in Iraq, and Afghanistan and included not only veterans' health costs, but also a doubling of the Pentagon defense budget over the last ten years (to nearly $600 billion a year, or an additional $300 billion/yr). The other $3 trillion in deficits came from starting those occupations but refusing to pay for them with higher taxes, and instead implementing Bush's tax cuts - an added $2.1 trillion in deficits. Also, initiating a Medicare drug prescription plan not paid for by higher taxes.

As evidence of the country's transformation to a national security state, Maddow cites the vast, increased cost of intelligence, not only for the CIA, but more than a doubling in personnel for the DIA (from 7,500 to 16,500). Additionally, the National Security Agency (NSA) doubled its budget and the number of security -based organizations went from 20 in 2001, to 37 in 2002, then adding 36 the next year, 26 the year after that, then 31 and 32 more, with 20 additional security organizations added in 2007, 2008, and 2009.

All of this security and military infrastructure was at the cost of pressing domestic needs, including repairing crumbling civil infrastructure (bridges, roads, water and sewer mains etc. - estimated cost from The Society of Civil Engineers: $1.7 trllion) as well as health care for nearly 50 million currently without it. Thus, in all these respects, by forcing us to over react and launch military occupations as well as amass a costly security -military state, Bin Laden has brought us to the precipice of fiscal ruin, which was his aim all along!

The question remains: Will our own congress critters now finish acting as Bin Laden's henchmen and do his final dirty work for him (via eviscerating budget cuts, as opposed to raising revenue needed), thus finishing off the American Middle class and its aspirations, or will the latter (already pummelled by the aftermath of the worst recession and under, or unemployment) live to see another, brighter day and hope for the future? We will have to see going forward(especially as congress returns from a two week break), but the early indices and signs aren't all that promising. The Republicans under the impetus of their Tea Party cohort are determined to slash, cut and burn ....which is exactly, precisely and uniformly what Osama wanted. He desired above all else for the ordinary American citizen to be the biggest loser...economically. Will they finish Osama's dirty work for him, beginning with making Medicare a voucher program for mendicants? We shall wait and see!
Posted by Copernicus at 9:07 AM