Anti-corporate protests = Domestic "terror"? Give me an F-ing break! 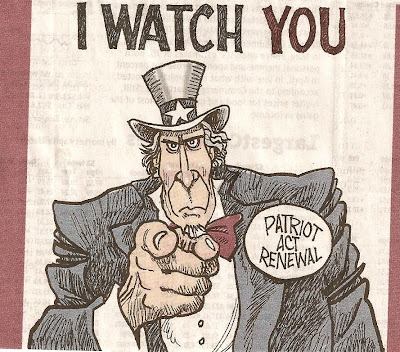 It was bad enough this week to see provisions of the "Patriot Act" which were due to expire extended again by a bunch of weak-kneed wussies in Congress, including the illustrious House "Tea Party" contingent- otherwise so noisy about their precious freedoms and defending them. Well, where the f*ck were these loudmouths when those extensions passed? Where were ALL of them, who we ordinarily see yapping about time -honored patriots but who are so cowed by the Anti-terror shtick (like so many in the 50s were by Joe McCarthy's anti-commie crusade) that they give it cover and even funding? Don't these dildo-brains understand the security state is already over-extended? Don't they grasp that fundamental REAL rights, like the 4th amendment - are under assault by the Patriot Act?

It makes me wonder if any of our politicos ever read Benjamin Franklin's quote that: "Those who would sacrifice liberty for a temporary security deserve neither liberty or security". And by the way, pardon me if I blow off anyone who claims "well, times are different now!" No, they are not! I lived through the fifities and early 60s when the most massive REAL threat to freedom was Soviet Russia which had over 5,000 H-bomb armed ICBMs aimed at us. Never during that whole freaking time, even in the midst of the parlous Cuban Missile Crisis of 1962, were so many civil liberties just chucked like I've seen since 9/11.

Anyway, anyone who still believes all these laws are merely innocuous inconveniences needs to familiarize himself or herself with the case of one Scott Crow of Austin, TX. Crow is an activist, specifically a self-described veteran organizer of anti-corporate demonstrations. He recently found, on requesting FOIA files from the FBI, that they'd been monitoring his activities for the past three years including "tracing license plates of cars parked out in front, recording the comings and goings of residents and guests, and in one case speculating about the presence of a strange object on the driveway" (Denver Post, 'Texan's FBI File Reveals Domestic Spying', p. 12 A, 5/29).

Well, the strange object turned out to be a quilt that was made for an after-school program, according to Crow (ibid.) Crow also found that more than 440 heavily redacted pages were in his FBI file, many under the rubric of Domestic Terrorism. Of course, this was exactly what many of us worried about when congress - at least most of them - passed the misnamed "Patriot Act" in 2002 without even reading its many provisions. We fretted that, given the open-ended definition of terrorism, just about any and everything would be included and that might well extend to domestic protests, especially against corporations. Now we know how valid those concerns were!

Crow himself commented on the extensive documents with mixed anger, astonishment and a degree of flattery that so much government energy could be expended on one little guy who lives in a ramshackle home with a wife, two goats, a dozen chickens and a turkey. According to Crow:

"It's just a big farce that the government created such a paper tiger. Al Qaeda and real terrorists are hard to find, but we're easy to find. It's outrageous that they would spend so much money surveilling civil activists....and equating our actions with Al Qaeda"

But recall this might not be that strange after all. It was Rachel Maddow, on her MSNBC show some weeks ago, that first brought it to national attention (after OBL's killing) that his intent was never to kill Americans so much as make us spend ourselves into bankruptcy. Maddow's analysis:

included evidence of the country's transformation to a national security state, as she cited the vast, increased cost of intelligence, not only for the CIA, but more than a doubling in personnel for the DIA (from 7,500 to 16,500). Additionally, the National Security Agency (NSA) doubled its budget and the number of security -based organizations went from 20 in 2001, to 37 in 2002, then adding 36 the next year, 26 the year after that, then 31 and 32 more, with 20 additional security organizations added in 2007, 2008, and 2009. Not said was that under the Patriot Act, ALL these agencies have compiled a single database that is cross-correlated and they often work together, including the FBI.

All of this mind boggling security and military infrastructure was at the cost of pressing domestic needs, including repairing crumbling civil infrastructure (bridges, roads, water and sewer mains etc. - estimated cost from The Society of Civil Engineers: $1.7 trllion) as well as health care for nearly 50 million currently without it. Even now as certain harpies and miscreants aim their sights at Medicare for the elderly, one of the most miserly programs in terms of benefits compared with similar programs in other nations. And goons like Paul Ryan and his henchmen want to make it smaller yet!

The point is, with such a vast and over-extended, over-active security state, that gets on average $28 billion a year, ways must always be found to justify the subsidies. The ways, evident from Scott Crow's files, include domestic spying. Where the f*ck are the ultra-Patriot Tea Baggers in all this? Or...are they all A-ok with a massive spy state that also protects corporations from civil protests, portrayed as "domestic terrorism"?

According to Mike German, a former FBI agent now at the ACLU:

"You have a bunch of guys and women all over the country sent out to find terrorism. Fortunately, there isn't a lot of terrorism in many communities, so they end up pursuing people who are critical of the government".

This is bollocks because one of the most fought for rights of Americans, since Thomas Paine's fiery 'Common Sense', is to be critical of the government. And, the day the citizen becomes fearful of doing that is the day we have tyranny returned. For when citizens are fearful of government that's what one has, when government is fearful of the citizen, one has liberty. Strange that all the Tea bagging repukes didn't recall that when they passed the extension for the Patriot Act. Even The Financial Times has noted in an editorial ('Terror and the Law', May 16, p. 8) it's time to put in place time limits. As they note:

"Congress needs to put time limits on the post 9/11 powers. Failure to do so in that first sweeping authorization was a dereliction of duty....Emergency powers were justified after 9/11 but allowing them in perpetuity is wrong"

We agree and would also add, that if there aren't enough genuine terrorists for the assorted agencies to go after and monitor, and they find they have to pursue innocent Americans exercising their free speech rights, then it's time to exact massive cuts in security funding for all agencies. Or at least, in direct proportion to the actual threat! We also expect the Teepees to get on board with this, or declare themselves ignominous HYPOCRITES!
Posted by Copernicus at 2:34 PM