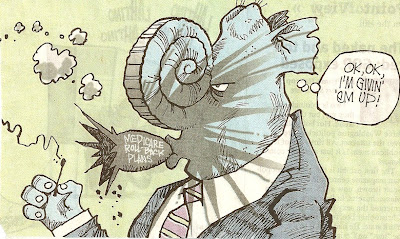 The Goopers, aka GOP'ers, may well have just managed to save their asses in a nick of time by having the sense to deep six Rep. Paul Ryan's insane plan to privatize Medicare using vouchers. Though they used the euphemism 'premium support" and expected most Americans would be dumb enough to buy it. Well, they weren't and didn't, showing the American voter hasn't yet been totally brain-f*cked into mindless sheephood and still has some sensibilities and awareness of his own welfare.

The plan evidently was roundly eviscerated in confab after confab held by Ryan in various venues, especially in his home state of Wisconsin. People, many who had done the numbers, asked pointedly how they were going to be able to afford to pay nearly two thirds of their own expenses out of pocket when many of their relatives were already struggling (in existing Medicare) to pay roughly 20%. Ryan had no answers other than to try the ploy of asserting that current seniors (55 and over) wouldn't be affected by the changes, only those who turned 55 by 2021. But again, people were too smart for his palaver, and the attempt to split up elder interests didn't work. They referenced then how they didn't want their younger relatives (already having a hard time finding work for decent pay) to have this onerous monkey on their back. From then, you could see Ryan chastened and backing off.

Of course, President Barack Obama also opened a fusillade on this cocklemamey plan, and noted that we can't as a nation, just toss seniors under the bus, which is about what would occur with Ryan's plan. Eric Cantor then complained about the rhetoric and noted that the Reeps or Goopers had no decent answers to the President's sharp rebuttals and attacks.

But even for Obama, who generally doesn't like confrontations, this was too big a softball over the plate to pass up. I mean there it was: big, juicy and just yelping to "hit me!". And he did. Meanwhile, for the left it showed him to have cojones creds and also built up Dem political capital as the Reeps had to retreat with their tails between their legs. This, despite the fact that the Reep House voted for Ryan's Nazi budget barely 2 weeks ago. Well, as they say, "you vote on it, you own it", and I do hope Dem candidates remember that when they hit the hustings next summer or sooner.

The plan was always cockeyed from the get go, and anyone who has tried to obtain private health insurance when over the age of 60 knew the score. Private insurers simply weren't interested in insuring a group that was 5-6 times more likely to be ill or injured or need care than a 35-year old. Well, they weren't interested unless you could cough up LOTS of moola, usually $850 or more a month, plus pay a high deductible of $5,000/ year and sometimes more. This is what one would get under the Ryan Medicare "plan" and that was assuming no pre-existing conditions, unheard of for most over-60 years olds.

The beauty of standard government Medicare is that it mandates insurers MUST accept a person over 65 who is qualified (i.e. has worked at least 40 quarters, or disabled), pre-existing condition or not. It also mandates certain price structures for operations, treatments, and keeps patient costs lower than would otherwise be the case. Even so, they're not insignificant. Starting from July I will have to cough up around $3,300 a year, and that is assuming no major operations or interventions. Right now, in fact, financial planners are telling their clients who plan to retire at age 65 to have at least $225,000 saved up to cover all the medical expenses that Medicare won't. In the case of Ryan's idiotic plan, seniors under it would need at least a half million saved up and even that is probably too low. Some CFPs in my area are saying that under the Ryan plan the average senior will need $700 grand, and that's minus any pre-existing conditions.

Once more, good on the American people who have seen through the Ryan horse manure for what it is. Does this mean that Medicare is ok as is? No, it does not! Medicare from the latest reports will be insolvent by 2024. But as I have noted before, there are ways to sustain it, if the Dems would only have the balls to come forward and do it, as opposed to leaning to repuke style spending cuts. Once more, my plan is as follows:

1) Allow Medicare to bargain for the lowest cost prescription drugs like the VA does. This would solve the huge problem of exploding drug costs at one time. Given these costs are rising by 9-14% a year they represent a huge drain on the national budget. By putting Medicare and the VA bargaining in the same class, I estimate that up to $50 billion a year can be saved. Much of this could be enabled simply by switching the Medicare options to generics. For example, substituting lovostatin for regular commercial statins like Zocor.

2) Eliminate finally all the Medicare Advantage plans! This in fact was one of Obama's early targets in the health reform wars, and he needs to come back to it. These plans were inserted into the parlous 2003 Medicare Prescription Drug law as a means to bleed standard Medicare down, and they have. They consume nearly $12 billion more per year (according to the Government Accounting Office) than standard Medicare, and those costs have directly pushed the program closer to insolvency. Worse, those receiving only the standard benefit have been forced to pay higher premiums to support those on the Advantage plans. Eliminating them would save $120- 140 billion over the next 10 years.

3) Reinstate the FICA tax (eliminated for one year as a result of the December Bush tax cut extension agreement) and when resumed, increase them to at least 8.4% to make up for the two years of lost revenue (which funds both Social security and Medicare). After two or three years, the regular 6.2% rate can be resumed.

4) Consider seriously raising the FICA limits for higher incomes levels, at least to $250,000 to help pay for both Social Security and Medicare shortfalls. People at the upper end need to bear in mind they're part of this country too and need to help out. Remind them of John F. Kennedy's famous quote: "If a nation cannot save the many who are poor, it will not be able to save the few who are rich".

5) Allow ALL the Bush tax cuts to peacefully expire next year no matter how much political pressure the Rs exert, and we know they will exert a lot. As it is, the giveaway in December added nearly $900 billion to the deficit that could have been totally avoided - i.e. by allowing both the middle class and higher income Bush tax cuts to finally expire.

There are ways to extend Medicare for all, without doing it on seniors' backs or lives. The issue is whether the primary defenders of Medicare will have the nerve to do it. Or, will they allow themselves to continue to be politically compromised, say by receiving campaign donations from the very ones (Big PhrmA, Private Health insurers) from which extra savings will need to be wrenched? The answers will tell us whether the Ds are still the party of the people, or merely the other half of the Corporate-owned Duopoly apparently governing this nation.
Posted by Copernicus at 11:59 AM