Perhaps the Best Book on God Ever Written 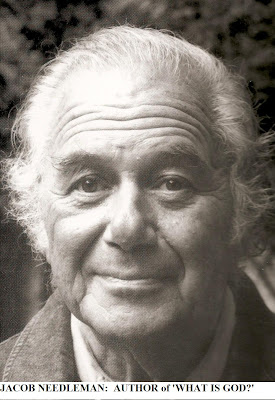 In earlier blogs I pursued the issue or topic of 'God' from the perspectives of both logic and theodicy. For example, in the first case, I cited mathematician Richard Dedekind who once noted that if God is omnipotent, then by virtue of that attribute He’d be able to confect or manufacture a rock of infinite mass. However, by being omniscient, he’d already know that if he attempted to lift it, he’d use up all his infinite energy in doing so. Hence, being omnipotent contradicts being omniscient. Which is merely another way of asserting the concept is logically incoherent or contradictory at its core. This, of course, merely conforms with Gödel’s Incompleteness theorem(s) to the effect that no statement forged out of an arithmetically-based system of axioms can yield a result free of contradiction. Because there is contradiction, all such systems are incomplete and their conclusions unproveable.

From the viewpoint of theodicy, I explored Bernard Haisch's "God Theory", wherein he claims
:
"...an Infinite Intelligence turns potential into experience, actualizes the merely possible, lets things happen that otherwise would not, lets novelty arise. Under the God Theory, the universe is not the wind-up and let is run fabrication that Newton envisaged but rather a dynamic experiment in which all sorts of dynamic things are generated”.

However, as intriguing as that notion sounds it falls short in the tricky arena of theodicy wherein one's concept or "theory" must account for the existence of evil in the world, especially human evil. For this, he falls back on the eastern religion concept of "karma" for example, when he writes:

"It is your snapshot view from the perspective of a single lifetime that outrages your sense of justice or causes you to demand a day of divine judgment. Better to think of karma as a multi-lifetime process of re-education, rehabilitation, and inescapable balance."

And then I noted the reasons this doesn't satisfy. (For example, many karmic espousers use the odious argument - to account for the Holocaust- that "The Jews that died in those gas chambers and ovens were simply receiving karma for what they had done to many others in previous lives. They were just all collected in one place in this life and punished one time". But this is simply too trite, too neat, and in the end incomprehensible.

Jacob Needleman's book, What is God? is different, because not only is he able to provide the best account yet of why so much human evil exists in the world (which is possible even with a putative God existing) but also provides a concept of God that is at once rich, and makes eminent theological sense. Moreso, because Needleman takes us with him on his own personal journey from a diehard atheist (and former Jew) to his novel discoveries incepted first by Buddhist scholar D.T. Suzuki, followed by the sage G.I. Gurdjieff, then the devastating takedown of pure logic and reason compliments of Immanuel Kant in his Critique of Pure Reason. Finally leaving his account of theodicy for last.

His encounter with Suzuki occurs while still a brash academic know it all, already an atheist, who confronts the Buddhist with the question: What is the self? Suzuki calmly replies: Who is asking the question?, which effectively blows the young atheist's mind to bits and sends him off in near despair - because he realizes he can't provide any answer. Thus begins his quest for "Self" and in addition a deeper spiritual path.

His involvement with the writings of G.I. Gurdjieff follows, and is more illuminating than his Suzuki exchange, or non-exchange. He observes (p. 75) that certain elements of Gnostic writings remind him of the terminology and underlying messages in Gurdjieff's works. Chief among these is that "the human condition is a state of waking sleep in which the whole of man's life is mechanically ruled by the impersonal forces of world which itself is lost in meaninglessness and illusion". In this sense, nearly all humans were "puppets" in Gurdjieff's word useage. This meant they were largely incapable of acting as free, autonomous agents even if they believed they were. Even so-called atheists were under this grip since they became hollow puppets charged to react to whatever believers wrote, thought or expressed. The latter were also puppets, since they were trapped within pre-conditioned reactions to atheists (what they thought or wrote) as well as trapped within pre-conceived concepts of rightness, 'salvation' and knowledge. So long as both sides remained chained to their archaic notions, false logic and concepts they remained puppets in life- merely reacting, never acting.

In some ways, this take on atheists and ultra believers echoes one endorsed by author James Byrne in his book, ‘GOD’. Byrne points out (p. 151):

"The idea of God as Being is the creation of the philosophical gaze, a result of the drive to objectification which is the hallmark of the history of metaphysics. It is the `God' which is argued about in theism and atheism, and which can only be a projection of humans"

In other word's, Byrne's "philosophical gaze" is a precursor for human mental puppethood and if we don't get beyond that gaze, we remain trapped in the role of puppets. At this point, Needleman introduces us to the work of Kant, his 'Critique of Pure Reason', explaining how merely reading its first pages brought tears to his eyes, so immense was the impact made. As Needleman puts it (p. 119):

Thus, "the indisputable knowledge we have of the world is indisputable only because we have projected our logic upon it. In 'knowing' the world we actually create it in its most fundamental structure". The problem is this fundamental structure is a confection, a secondary fabrication. This expose of human knowledge shocked the world at the time and still does, though the mental fabrication bit didn't become evident until hundreds of years later, when experiments using brain imagery confirmed the outer reality presented to us was reduced to a simulacrum in our minds with which we could engage. Indeed, there was a noteable time gap between perception and brain recognition during which interval "reality" was engendered (see, e.g. The Evolution of Consciousness by Robert Ornstein.

Now, to make a very much longer story short, what does this all mean, and what does it have to do with Needleman's question: 'What IS God?' Only this: that the illusion of knowledge and its false reality is also what is responsible for creating an illusion of self, which is ego-dominated and perceives itself as an atomistic individual separate from others in the universe. This goes back to the issue of why D.T. Suzuki asked the younger Needleman "Who is asking the question?" when Needleman asked him 'What is the self?' What Suzuki wanted to know was if Needleman knew whether his self was asking, or the SELF! The latter being an infused Über-Being, endowed with the essential energy and identity of a transcending Reality. It was, in effect, the difference between being the puppet and being an Awakened Active Agent of the Universe. The puppet has a 'self' the latter is THE SELF, i.e. God! In other words, God is not external to humans but an energy-abundant consciousness available to humans IF we accept it (to channel into our being) and don't impede it.

In this sense, it bears some resemblance to Bernard Haisch's entity where he observes:

“Under the God Theory, an Infinite Intelligence turns potential into experience, actualizes the merely possible, lets things happen that otherwise would not, lets novelty arise.

That 'novelty' is exactly what differentiates the puppet self from the authentic SELF. Expressing novelty means shunning all automatic responses, OR automatic prescriptions for one's life. Once one adopts special prescriptions (or proscriptions) he reverts to puppethood and novelty is abandoned. This means one can't run one's life chained to any simple formula or artifact, whether the latter be a bible, a statue, an implement (e.g. rosary) or some presumed ironclad coda. Of course, this conception of the 'I AM' (e.g. I AM GOD) is not new, and has been around for as long as the perennial philosophy, and popularized in such books as U.S. Andersen's Three Magic Words, Wilshire Book Co., 1954. The difference is that Needleman's exploration and conclusions are totally committed to his own self-discovery and hence more meaningful to the reader based on deep, internal reflection and experience.

What about the issue of human evil and how it can co-exist with this God-conception? Needleman notes that evil in whatever guise is always the direct result of small 's' (self) puppets acting in the world with their own self-interest, inattention and automation. By contrast if the SELF acted, e.g. manifesting the ultimate consciousness (directed by ATTENTION, the paramount virtue in the universe) all negative words or actions against others would cease. People kill others because they are directing themselves as small -s puppets not as THE SELF. Were they to configure the latter in their consciousness they would act in accord with it and hence, be unable to inflict any kind of evil on others (who share the same SELF or have the potential to). Which makes sense! Thus, God is not responsible for human evil but can only act if humans allow It entry to their minds. Only puppets are responsible, that is beings "mechanically ruled by the impersonal forces of world which itself is lost in meaninglessness and illusion" in the terminology of Gurdjieff.

What was most stirring for me, was Needleman's defined place for atheism, or at least the atheistic mindset in this pursuit of SELF. That is, in order to more ably seek and find this SELF it is essential to "tear down all pretense, all religious self-deception, as an essential purgation of the human mind and heart". In other words, one can regard atheism or the atheist mindset as a mental disinfectant preparing the mind to be able to receive the great SELF. As he brilliantly puts it (p. 223):

"That bittersweet absence of illusion and self-deception, that empty space swept clean by astringent skepticism and purgatorial self-honesty: here perhaps is the truly sacred space in our otherwise self-deceived, chaotic world. In that sacred space, within the individual and within a civilization, and only in such a space, can the new birth be seeded from source higher than we know, a source searching for us even more than we are searching for it. I will call it, if I may, God - the God whose place has been made ready, paradoxically, by the honest skepticism about God-in quotation marks."

So perhaps I am not an atheist after all, by Needleman's description, but rather harboring a "sacred space of astringent skepticism" while waiting for something more.
Posted by Copernicus at 10:16 AM