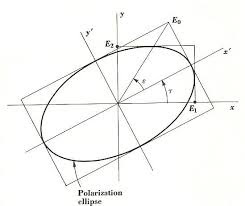 In the ideal world of radio astronomy observations, one's choice source would likely be one for which the radiation is monochromatic or single frequency. In this case one deals with completely polarized waves and the associated constants (E1, E2,  δ ) are easily computed, with E1, E2 the E-field amplitudes.

In the real world of radio astronomy, the objects detected display partial polarizations which must be further analyzed to reveal reliable information. Electromagnetic waves are  polarized when their E- field  components are preferentially oriented in a particular direction.
Other forms of polarization include:
Linearly or horizontally polarized: I.e. the E- vector is confined to one  (horizontal) plane

Elliptic: any polarization not circular or plane.

In addition to source polarization, the orientations of the sources in space relative to the observer must be taken into account using something called "the Poincare sphere".  This is where the Stokes parameters enter. Thus, emission from celestial radio sources within any finite bandwidth D u  consists of the superposition of a large number of statistically independent waves for a variety of polarizations. The resulting wave is then "randomly polarized" and the electric field components may be written:

Where all the time functions are taken as independent. Also, we have the time variations of E1(t), E2(t) and δ (t)  as slow.   This is compared to that of the mean frequency, i.e.  2 p u, being of the order of the bandwidth D u  .

The most general state is one for which the wave is partially polarized. Waves emitted from celestial sources are generally of the partially polarized form. In traditional radio astronomy, one deals with partial polarization by making use of the Stokes parameters, first introduced by Sir George Stokes in 1852. Reference may be made here to the attached diagram in order to fix ideas on how the parameters are developed and used.   We can write in the first instance:

Note the above relations apply to a completely polarized wave.   Three specific cases are worth considering to fix ideas (AR is aspect ratio):

Where 2 e  denotes latitude  and  2 longitude on the Poincare sphere, while the new symbols ( s 0  .....s 3 ) are now introduced to represent the normalized Stokes parameters. The Stokes parameters can then be expressed as matrices of the column type, e.g.

Where S is the total Poynting vector in W/ m2

where d is now the degree of polarization given in terms of the normalized Stokes parameters:

So, for a partially polarized wave:

Note that circularly polarized wave components may also be used which will then rely on the quantity AR or the ratio of the major axis to the minor axis for the polarization ellipse (top diagram).. Then, e.g. for a completely polarized wave:


There are many occasions for which the "coherency matrix" C will also be used. Here we are concerned with the response of the detection system, antenna  -receiver etc. and treat the detector as one for radio photons. (In regular optics the applicable matrices are called coherency matrices.

The coherency matrices and Stokes parameters for different types of radio wave are indicated below (the Stokes parameter will be given as a row matrix to save space but it is understood it must be rotated to a column form to be proper):

For which coherency matrix: C =

Find the normalized Stokes parameters and the coherency matrices for each of these waves.
Posted by Copernicus at 6:53 AM