How Do The Packers Solve The Aaron Rodgers' Kerfuffle? 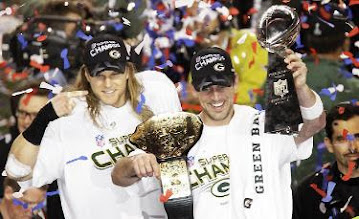 The NFL draft first round had begun on Thursday last week and I looked forward to seeing the team's picks.  Then, like a turd dropped into a punchbowl at a party, the Aaron Rodgers' controversy erupted and suddenly became the main talking point on both ESPN and the NFL channel.  Rodgers, according to the Milwaukee Journal-Sentinel, was evidently peeved (still) at how QB Jordan Love was drafted last year at No. 26 in the 1st round.   While most in Packer nation may have long since forgotten that - Aaron didn't - and made no bones about the disrespect shown him, and how he now wanted out, as in a trade.

The problem is that the Pack brain trust have him hammer-locked in by contract.  He could refuse to play but that passive aggressive move ccould cost him tens of millions including in fines, lost pay.  He could just quit, leave the game and host 'Jeopardy'  and that's what many believe his only option may be.  How do we say it in Barbados? He's batting on a losing wicket.

Comparisons have been made to Tom Brady and how that Pat Brat escaped New England, but the analogy is false.  The final contract that Tom Brady signed in New England, in August 2019, contained a clever provision that prevented the Patriots from placing a franchise or transition tag on him, ensuring that, as he desired, Brady would become a free agent after the season.  Aaron, meanwhile, signed a contract through 2023 averaging some $37 m a year, and no such escape clause included.  As many have said it's hard to feel sorry for this guy - given most QBs these days are a pampered and entitled set- making tens of millions a year.  That may have been brought home yesterday when an AR ad for something or other appeared at a Timber Rattlers' game and it was booed loudly by the Brewers' minor league fans.

Aaron's pique is understandable given that if he'd had the weapons Brady had with Tampa Bay the Pack may have prevailed in the NFC championship - and in the Super Bowl against a weak KC team as well.  But he didn't.  That's another point of difference, though. However disenchanted Brady became in New England — with the lack of receiving talent and  his diminishing power to influence personnel decisions — he did not air his grievances publicly. Done with the Patriots after two decades and six titles, Brady didn’t pout. He just left. His contract allowed him to do so.

"For him to be upset, my God, I don’t understand that,  Who the hell cares who you draft? He's a three-time MVP in the league and he’s worried about this guy they drafted last year [Jordan Love]?!"

"Let him gripe. Let him cry. Retire. You are [37]. Go ahead and retire. See you later. I’m really strong about stuff like that. It just makes him look weak."

As the Milwaukee Journal-Sentinel writer offered after posting this, "Yeah, ol' Terry can still zip 'em in there!"  Whatever.  Bradshaw is mainly a loudmouth, brash hick from Louisiana, but he may have a point or two.   I tend to side with Journal-Sentinel sports editor Tom Silverstein who argued in a piece today that the best move for the Pack may be to just trade Aaron and do what's best for the team.  If Rodgers's heart isn't in playing for Green Bay, that is probably the only option.  And to hear and see Denver Post sports editor Mark Kiszla tell it, the Broncos can't wait to get him.  Especially as his fiance loves our state. Well., we will have to see. Whichever way it rolls I hope it works out for Aaron, and the Pack.

Kiszla: Free Aaron Rodgers! Why the Broncos and the reigning MVP could make for a beautiful love story. – The Denver Post

For Aaron Rodgers and a new breed of superstar, a dream job is no longer good enough