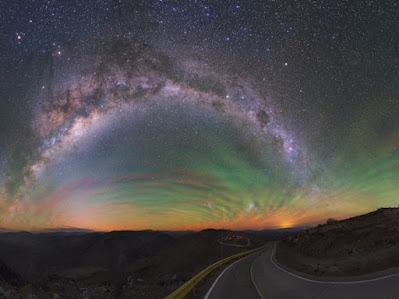 Bright light event over Chile in 2016 caused by gravity waves from T-storms.

According to Wikipedia:   "Gravity waves are waves generated in a fluid medium or at the interface between two media when the force of gravity or buoyancy tries to restore equilibrium. An example of such an interface is that between the atmosphere and the ocean, which gives rise to wind waves.

In other words, gravity waves in various forms are ubiquitous though we may not even notice them, including that a particular extraordinary event is at root a gravity wave manifestation.  In one of these more extraordinary events - shown in the top image- gravity waves produced by distant thunderstorm generated ripples that left a glowing atmosphere  - as seen from Las Campanos Observatory in Chile.   This as reported in EOS: Earth &  Space Science News, May, p. 43.   In the report we learned that:

"Waves propelled through the air by distant thunderstorms produced glowing bands in the sky during a 2016 “bright night” event, when the atmosphere was illuminated by a green glow visible to the naked eye. The ripples disturbed an atmospheric layer nearly 90 kilometers (56 miles) above El Leoncito Astronomical Complex in Argentina."

It was also interesting to learn that the event occurred at an altitude where "reactions between oxygen molecules produce the brilliant airglow of a bright night; solar energy hitting Earth’s magnetic field excites the same molecules to create aurorae."

Even more astounding is that the new observations suggest that gravity waves from storms have bigger impacts on global and space weather than expected.  Bear in mind here our general preoccupation in space weather is with highly energetic external events - mainly solar- such as coronal mass ejections, e.g.

So why would events such as depicted above in the graphic rival an external event like a CME?   Steve Smith, a space physicist at Boston University and lead author of a new study presenting these findings, published in Journal of Geophysical Research: Atmospheres, (https://doi.org/10.1029/2020JD033381)  suggests the energy and momentum transported by these thunderstorms was much larger than expected.

By combining satellite imagery and data captured by an all-sky imager, Smith and colleagues determined that the gravity wave ripples originated from a thunderstorm complex several hundred kilometers away. These measurements also enabled the calculation of the wave’s momentum flux (how much 'push' a wave has) and determined it was was several times larger than previously observed.  According to Prof. Smith,  "That's going to have an impact on how we model the effect of gravity waves, for both global wind circulation and radio wave propagation through the ionosphere."

Thus such events theoretically could have the same effect on space weather as sudden ionospheric disturbances (SIDs) which were the subject of my own research in concert with a certain type of solar flare.   But what about modeling these gravity waves?   This is crucial given gravity waves are still not well understood, and likely even less so than plasma waves.  The reason is that the small spatial scale coupled with the low resolution inherent in most atmospheric models has historically made the analysis difficult.   Plasma waves, meanwhile, can be studied in assorted laboratory contexts, such as in tokamaks.

In the same issue under a separate report (p. 45) we see there is hope for an advance in modeling given  recent work by Matsuoka et al.  which sought to better define gravity wave parameterizations using machine learning. Though gravity waves can be generated by a variety of disturbances, including: convection, jet streams, and physical barriers. the researchers focused on orographic gravity waves.

These have the ability to radiate out from mountains, in a 1,000-square-kilometer area of the Hokkaido region of Japan. The team actually trained a convolutional neural network to understand the relationship between conditions in the troposphere, such as temperature, humidity, and low-resolution horizontal wind, and high-resolution wind fluctuations in the lower stratosphere, using a 29-year atmospheric reanalysis data set.  A lot of work but it paid off!

The team's neural network actually estimated gravity wave structure, wave number, and the magnitude of the momentum flux. It was most accurate in winter, when gravity waves tended to be stronger. Although most previous models considered only vertical propagation of gravity waves, the researchers note that the deep learning strategy provides a computationally cost-effective way to evaluate horizontal propagation as well. (Geophysical Research Letters, https://doi.org/10.1029/2020GL089436, 2020)