1.The Lagrangian and Hamilton’s Principle

We begin by considering the simple mechanical system shown below: 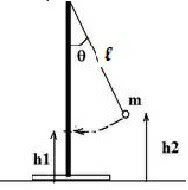 We note that h2 is the starting height for the initiation of the pendulum’s oscillation and the mass m passes through the minimum height h1 at the middle of the oscillation.  Ideally, the loss in potential energy equals the gain in kinetic energy or:

This can also be developed in terms of the angle q.

The change in potential energy of the system is:

It is also possible to work out a key quantity called “the Lagrangian” which has supreme importance in mechanics, as the difference between kinetic (T) and potential (V) energies, hence:

Here, either of two coordinates (ℓ , q)  may be used to describe the motion or energy of the system.  Two methods are often used: i) the Lagrangian, and ii) the Hamiltonian,  e.g.

For open dynamical systems, e.g. a ball tossed into the air  from a tall building, e.g.

We know the motion is under effects of gravity.

It is also possible to describe an important quantity called the action, S.

We compute the action by calculating the average potential energy V and kinetic energy T at each point of the ball’s  motion – from its maximum height, to its minimum (where it has maximum T). We then take the Lagrangian (L = T- V) for each point and average that then integrate.

Acknowledging the position x(t) is a function of time t. Similarly, V =  mgx(t).

Then for the action S:

Say between time t = t1 and t = t2.   More exactly we need to introduce the symbol  d S to denote variation in S  e.g. that occurs when we arbitrarily vary the coordinates of the natural path (say x, t) as shown in the diagram.  Generally we take such variations to occur in infinitesimal amounts.  The end result is an equation that requires that the time integral of the Lagrangian function for the natural path assume a stationary value.  Thus:

This stationary value is always a minimum or maximum, say relative to a neighboring path traversed n the same time, with the same terminal points (t1, t2).  Now, an interesting aspect we find is when we graph the position vs. time t.

To fix ideas, suppose that three identical balls (particles) start from the same point at coordinate (x1, t1) and end at the point (x2, t2), as shown in the sketch below: 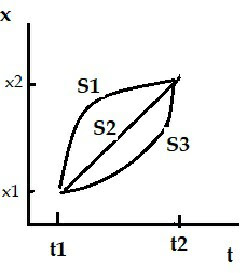 We will take the “natural” path to be S2 and the neighbors to be S1 and S3.  Again, irrespective of the path the balls (particles) arrive simultaneously at x2, t2.  Then Hamilton’s Principle of Least Action states that the time integral of the Lagrangian L must be either less or greater for the natural trajectory than for any alternate path.  This actually gives an alternative way of stating Newton’s 2nd law, F = ma.

In the last case, we would integrate using a second variational time, say tau [ τ]  instead of t.  Then:

We know the bracketed quantity is zero, i.e.

So we can  show equivalence to Newton’s 2nd law.

These can be angular or linear, but described in general notation:

For generalized forces: consider a particle which has moved an incremental amount  d r   where:

This is an actual displacement but so small that the forces don’t change, say for a vertical displacement. For N particles we have:

Or in polar coordinates:

Consider now the transformation of:

The generalized force is:

We may  use the diagram below: 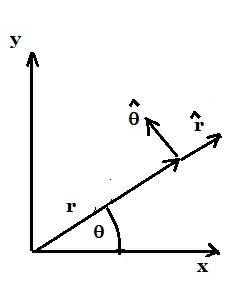 Note from the diagram this is a component in the direction of  q.

It is of interest here to obtain the Lagrangian in polar coordinates.  We know:

The kinetic energy T is:

Consider the trajectory for a missile shown below where the vectors show the changes in velocity for x and y-components at different points.: 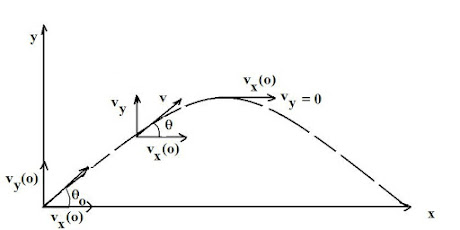 Explain qualitatively how Hamilton’s principle of least action would apply to its motion if the path can be described by an equation of the form y = A sin x.  If this equation defines the “natural path” write one other equation that represents a variation from it.   Find the Lagrangian for the natural path, the action S and the variation in the action  d S .

(Hint: for least action analysis, change the ordinate y  to x(t)  and the abscissa to t  (time).)

Posted by Copernicus at 6:34 AM