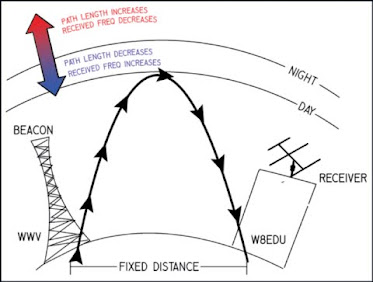 As I noted in a previous blog post, e.g.

the economic impacts of space weather–related disruptions can be substantial, affecting satellite systems as well as systems on the ground. A severe geomagnetic storm (on the order of the Carrington Event of 1859) could potentially have a catastrophic effect on modern infrastructure.  As I pointed out in the earlier blog post (link):

In our own current situation, we've become a more vulnerable society by constructing mammoth, interlocked  power grids which can crash if the right combination of factors is imposed. While we do have high voltage transformers that connect directly to the ground (zero or earth potential) to neutralize power surges from lightning strikes, these don't afford any protection against powerful geo-magnetic currents that are induced in the earth and flow upward into the grid. Then ...one such mammoth event, could spark calamity. Possibly no electric power for days, maybe longer ...over vast swatches of North America.In addition, if a monster flare hurls a super stream of charged particles along with the CME we could expect adverse effects on all GPS positioning satellites. Bear in mind that GPS, besides providing directions for road users, allows synchronized cell phone conversations, as well as orchestrates air  air traffic not to mention 'date stamping' most financial transactions and guiding the dynamic positioning of the majority of deep sea oil drilling and gas operations.

Even solar storms of more ordinary size can induce currents in the power grid that drive up energy prices, affecting manufacturing and commerce.  Now in the latest issue of EOS Space Science News we learn that  space weather forecasting technologies that use Earth’s ionosphere as a sensor for events in its neighboring atmospheric layers are coming onstream.  These include the use of short wave radio - and one particular station such as WWV,   based here in Fort Collins, CO.

As reported in the piece, ham radio is currently experiencing a technical renaissance, thanks to the advent of inexpensive single-board computing platforms (a complete computer built onto a single circuit board, such as a Raspberry Pi) and open-source software. Such computer-based systems serve as virtual radio repeaters, connecting computers via the Internet to actual ham radios in the real world to enable remote control and data collection.

How can ham radio signals tell space scientists about energy and particles originating in the Sun and traveling millions of miles through space? The answer lies in the ionosphere, the electrified atmospheric region that can refract radio signals back to Earth. This is a complex region heavily influenced by the solar wind, extreme ultraviolet ionizing radiation, and geomagnetic disturbances, and even by the lower and middle neutral atmosphere.

Just outside Fort Collins, Colo., lies the heartbeat of the electromagnetic communications spectrum—and one key to precision measurements of the interactions between ham radio and solar weather. The sound of radio station WWV, the time and frequency standard of the National Institute of Standards and Technology, is familiar to any shortwave listener. It is the oldest continuously operating radio station in the United States, having been on the air since 1919.  (Indeed, on April 8, 1976 - working in concert with Dr. Kenneth R. Franklin of the Hayden Planetarium-  we used WWV (in Barbados) to observe the occultation of the star Epsilon Geminorum by Mars.)

But how do space weather forecasts enter?  Radio signals provide a window into the changing ionosphere. The various signals from WWV, reflecting off the ionosphere, undergo changes in path length as the ionospheric electron density profile changes. This results in changes to the observed frequency of radio signals at receiving points, akin to the rise and fall in pitch of a passing train whistle. (Doppler effect)

Comparing the received radio signal with a precision local frequency standard, such as a GPS-disciplined oscillator, allows a user to measure these ionospherically induced frequency shifts (See top diagram). This measurement is prepared and recorded with open-source software. Numerous data sets recorded simultaneously from multiple locations offer information—when these data sets are examined both individually and collectively—about the ionosphere at the time the data are taken. The assembled information includes the movements of traveling ionospheric disturbances and other important phenomena at various scales.

The future holds great promise as hardware for a distributed network of personal space weather stations (PSWSs) is already in the design stage.  It will be accessible to professional and amateur scientists alike. These stations come in two varieties : a low-cost model designed only for frequency observations  and the more powerful, software-defined radio TangerineSDR, a wideband receiver that can be reconfigured for a range of experiments.

At the core of both is a single-board computer, which interfaces with a set of modular instruments (e.g., a magnetometer) and uploads data to a central database.

The beauty of the computer and short wave radio connection is that it will allow much greater participation of amateur scientists in space weather research.

Posted by Copernicus at 6:49 AM