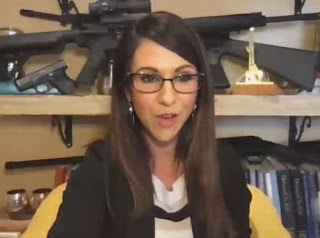 It wasn't long before the impetuous high school dropout and blithering bimbo, Lauren Boebert,  made the news again - this time for her anti-migrant venom.   This followed a "guest commentary" appearing in the Denver Post five days ago that reads like it was written in a marijuana haze.  Here are some of the more absurd segments of her sorry piece and my responses:

"I  wasn’t about to let Hidin’ Biden get away with not mentioning the crisis he created at the southern border during his address to Congress, so I forced the fake news media to cover it by wearing the same kind of Mylar blanket that the Biden administration is giving to the record setting 18,000 unaccompanied minors in their custody who have come over the border in recent months. When children are sleeping in tin foil blankets, that’s a crisis."

In fact, Boebert's  mylar blanket stunt (she doesn't give a good crap whether migrant kids sleep in mylar blankets or tin foil) was mocked in most media and social platform outlets as more acting out by a mentally deficient brat.   In truth, when children are blocked from entry and hurled back into Mexico without food, water or kin - THAT is the crisis.  Which is what her bimbo plans offers and is the cornerstone of one of her proposed new laws. (No Amnesty' act)

"The Biden White House is proposing diverting $4 billion taxpayer dollars from the border wall funding to corrupt governments in Central America. They’d rather build roads in Venezuela than build the wall."

Incredibly,  Lauren doesn't appear to know that Venezuela is not in Central America, but a nation in South America.  Apart from that - how can anyone "divert" money from a border wall that Mexico was supposed to pay for anyway?  (According to Donnie Dotard)

"While Kamala plants trees and crochets and Joe hides in his basement, the American people are suffering. In rural Colorado, we have at least 190,000 “illegal aliens,” as defined by U.S. immigration statutes."

Actually, Boebert seems not to know the Oval Office is not a "basement", nor is the VP's readying for her Central American fact-finding mission "crocheting".  But this is how the classical bimbo's brain works.  Also, it is the people in Boebert's home town of Rifle who are suffering -  as each of her  foot -in -mouth escapades exceeds the previous one in imbecility -  when it makes the headlines.  In rural Colo, there are some 1,900 immigrants resettled -  any others there are at the behest of farmers who can't seem to find nuff  'Muricans to pick the crops or harvest the fruits for 12 hours a day.  More Boebert bollocks:

"They are costing our economy an estimated $1.1 billion per year, according to a 2017 report put out by the Federation for American Immigration Reform (FAIR). That does not include the millions of dollars immigrants send back to their home countries annually."

The H.S. dropout Bimbo seems not to be aware that FAIR  has been classified as a hate group -  with close ties to white supremacist groups -  by the Southern Poverty Law Center.  Boebert is also too dense to figure out that when migrants send $$$ back home that provides incentive NOT to come to the U.S. but to stay put.  Why risk life and limb to cross 8,000 miles of harsh territory with smugglers when your kin is already sending money home?

"In 2012, the Center for Immigration Studies estimated using a survey that about 45% of “illegal aliens” in Colorado are on government aid, including 41% on food stamps and 27% on Medicaid. "

Alas, the bug-faced Boebert fails to mention the CIS  is an anti-immigration think tank and was founded by eugenicist and white nationalist Otis L. Graham.  All its "data"  are skewed to support the anti-immigrant narrative Boebert parrots.  Who will Boebert quote next? Adolf Hitler?

"Additionally, illegal immigration hurts our economy through harder-to-measure expenses like unemployment given to Americans who lost their jobs to aliens here illegally, the high rate of uninsured drivers, higher crime rates, and lost tax revenue due to underground market activity. A decade ago, there were 108,000 immigrants working illegally in Colorado, taking jobs away from American citizens, and that number has only gone up."

What a pile of fulsome crap.   Here, Boebert pulls every last anti-immigrant stereotype from the CIS grab bag.  The choicest one is that 'Muricans are losing or have lost jobs to the immigrants - when it is THEY who have literally saved our bacon by working arduous jobs in meat - processing plants (like in Greeley) and laboring 12-15 hours a day harvesting crops. Jobs  99% of Americans want no part of.

Ah yes.  Putting migrant infants, toddlers back into cages even as their parents are sent hundreds of miles away, separated indefinitely.   That's the basis of her 'Secure The Southern Border Act.'

Now, for a couple of Denver Post reader comments appearing in the days following her screed:

Re: “Let me draw your attention to the crisis at our southern border,” May 14 guest commentary It is as painful to read Boebert’s essay as it must have been to publish it. The duty to free speech and the duty to truth have never been so obviously in conflict. This tortured piece of infantile writing is useful only to show the extent to which lies and innuendo populate her thought.

-----------------------------
I read Lauren Boebert’s “commentary” with a mixture of amusement, horror, and disgust.
Amusement because it was written so unprofessionally and was filled with middle- school snark and insulting distortions (“Rather than visiting the border to see the humanitarian crisis her administration created, she’s spent the past few weeks visiting her friends in San Francisco and going yarn shopping.”) Horror, because Boebert felt no compunction about deliberately presenting a one-sided picture and outdated data to bolster her unfounded claims (including the “cost” of undocumented immigrants in Colorado — which research has shown is offset by their tax payments — and a 2012 report by the so-called “Center for Immigration Studies,” which has zero relevance almost a decade later).
Disgust, because she used ad hominem attacks, slippery slope arguments, and hasty generalizations to promote the failed policies of the Trump administration. It was an abysmally poorly written commentary, an insult to the intelligence of Coloradans, and an obvious dog whistle to the far-right elements of her base. I am surprised the Denver Post published it.
Colin Callahan, Denver
-------------------------------
See Also:
Excerpt

Hoping to score some cheap evangelical cred, Lauren Boebert asked her Twitter followers what their favorite Bible verse is. Did she really think that an open social media forum was going to give her what she wanted? Perhaps. She’s dumb enough to think it might. Or maybe she’s from the Marjorie Taylor Greene school of affirmation by scorn.

The Bible is a useful tool for the bigot. The King James Version (KJV) comprises 31,102 verses. Pretty much whatever your philosophy, you can find one to support it. And the best strategy is to remove the verse from its context.

Posted by Copernicus at 9:01 AM