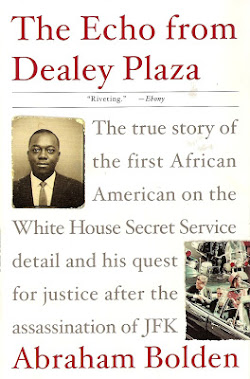 Peggy Noonan (WSJ,  'Save The Secret Service') May 22-23, p A13)  appears awash again in fantasies that don't hold up against reality.  This time, it concerns the Secret Service in the JFK administration.  This follows Carol Loenig's new book, 'Zero Fail', about the failures of the Service in the 2000s (mainly) such as allowing a mentally ill vet with a  knife to get as far as the Obama's East Room in 2014.

Peggy writes in counterpoint, "What lore, what a tradition of valor!" in referencing the Service in the Kennedy era, pointing out Agent Clint Hill "running to the president's car when he heard the first shot."  But Hill wasn't there to protect JFK-  but to protect Jackie.   It was Roy H.Kellerman, actually an emergency fill-in, who was assigned to protect JFK.

Kellerman, unlike Rufus Youngblood (who threw himself over LBJ immediately after the first shots) never moved from his own seat - from the time the first shot was fired until driver Will Greer pulled the limo into Parkland with the dead president in the back seat. By all rights, Kellerman ought to have flung his body over Kennedy after the first shot. He screwed up on his prime duty to protect the president. No excuses!

Kellerman, as we later learned (e.g in James Douglass' superb book, 'JFK and the Unspeakable'), was "relatively inexperienced".   In fact, the senior agent who ought to have been protecting Jack was Gerald A. Behn. But wonder of wonders, Behn "decided to take a vacation at the last minute"  - which left the inexperienced Kellerman in charge.

But the "wonders"  didn't stop there, as "eleven members of the White House detail had been transferred, at their own request, to other assignments within 60 days of the assassination." (Douglass, op. cit., pp. 260-66)

This brings us to the attitudes and behaviors of Kennedy's S.S. detail even before those eleven bailed out, and Behn went on holiday.   We learn about this set of dirty linen in Abraham Bolden's book, 'The Echo From Dealey Plaza.'   Bolden, as readers may or may not know, was the first African-American assigned to the White House detail of the Secret Service.    Douglass gives this summary of Bolden's career arc in his own book (p. 103):

"Abraham Bolden joined the White House secret Service detail in June, 1961. He experienced personally John Kennedy's concern for people. Kennedy never passed Bolden without speaking to him. He asked about him and his family in such a way that he knew he meant it..

Abraham Bolden saw increasing evidence, however, of the president's isolation and danger from the standpoint of security. Most of the Secret Service agents seemed to hate John Kennedy. They joked among themselves that if someone shot at him, they'd get out of the way. The agents' drunken after-hours behavior carried over into lax security for the president. The other agents remarked about 'niggers' in his presence."

What Bolden himself says about those agents he had to work along side is even more illuminating, including:

-  These agents detested JFK as a "n****r lover" and joked among themselves that if someone took a shot at Jack, they'd "be the first to get out of the way."

Some 'valor', huh?   Some decency, honor and courage.  Well, no, not from transplanted, inbred, cornpone cracker Johnny Rebs.  Bolden himself relates his own experiences with these racist maggots, such as one Harvey Henderson.  According to Bolden (p. 37), Henderson pulled him aside and told him:

""I'm going to tell you something and I don't want you to ever forget it! You're a nigger. You were born a nigger and when you die you will still be a nigger. You will always be nothing but a nigger. So act like one!"

Bolden went on to note that this incident confirmed for him that it was none other than Henderson who had left an overt racist cartoon in his Service manual on June 9. As he put it: "I knew it for certain now as certain as I knew he was baiting me into a fight."

Another time, Bolden relates (p. 31) how agent Bob Foster opened up during a drive through Hyannis Port when he spotted members of the Women's Air Corps. Evidently one didn't meet his expectations as, according to Bolden:

"Foster pointed out the window and shouted in his thick Southern accent, 'Thar goes a nigger!"

Which begs the question of why a guy like Kennedy-   a confirmed liberal and realist-  would keep such a contingent of yahoo Johnny Rebs in his detail. (JFK was no semi-conscious dummy, and he had to be aware of the Southern agents' behavior, hatred towards him.) No one seems to be able to answer that, other than perhaps he preferred to be cool and not rock the boat. Sad, because it likely cost him his life.

Contrary to Peggy Noonan's whitewashed memories, perceptions, the Secret Service was at its nadir during the Kennedy years.  Hell, their total incompetence, lack of commitment to his protection - based on ingrained prejudice - likely resulted in JFK's brains being blown out.

On the other hand, if the conspiracy to take him out was as interlocked and ruthless as I suspect, it may not have mattered how determined or well-trained any agents were:  JFK was still going to be the victim of an executive action.