Why Does Provincialism and The "Middle Mind" Dominate Media's Treatment of UFOs? 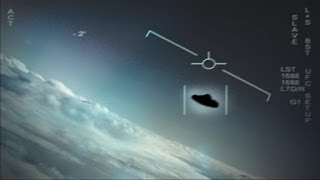 "If they were a threat they would have done something threatening by now. And more. This isn't War of the Worlds. We don't know who the beings are who operate these vehicles, or even if there is anyone in them. One clear indication that they are superior beings, though, is that, unlike us, they don't seem to think of anyone other than themselves as "enemies" to "defend" against. Which, need I mention, is to attack.

They are likely more than casual observers. The only purpose I can see them having is to keep us humans from destroying ourselves, and the planet in the process - the track we are now on at breakneck speed."-  John Hamilton, 'Come On Down!', smirkingchimp.com

The Sunday 60 Minutes segment on UFOs being spotted by military pilots was interesting from the point of view of correspondent Bill Whitaker's downplaying, dodging,  disbelieving reactions.  It was as if someone had told him fairies had suddenly appeared in the skies and alighted on the White House lawn. This was even after investigator Luis Elizondo's no nonsense descriptions. Elizondo,  a former director of the Advanced Aviation Threat Identification Program(AATIP), resigned in October, 2017.  This was after ten years with the program. He also "confirmed the new task force evolved from the advanced aerospace program."    According to Elizondo in one NY Times interview:

"It no longer has to hide in the shadows. It will have a new transparency."

But transparency is one thing, provincialism and an unimaginative approach to a cosmic reality is another.   In this case, Whitaker's responses to what he was being told seemed to ooze a contentment to remain parochial and retain a cosseted mentality.  ("You know how that sounds?  Nutty, crazy!") What Curtis White once called "the Middle Mind" in his eponymous book.  In White's view the 'Middle Mind' is a safe mental space where all the old verities are true and right -thinking citizens don't question them too closely or trespass intellectually into areas that mark "forbidden zones" - such as LBJ having helped plan the JFK assassination (to avoid prosecution in the Bobby Baker scandal) or that UFOs are actually alien craft.

By contrast the middle mind tropes,  i.e. "there's equal opportunity for all", "Oswald did it",  "UFOs are illusions" etc. are  trotted out endlessly by our shameful news media  and taken to be engraved in stone. Yet they are used to manipulate our consciousness, i.e.. that we inhabit  the "land of the free" - despite having more people incarcerated than all the other nations together. And UFOs are batso, nutso nonsense that no self -respecting 'Murican would accept as real - i.e. as space craft from other worlds.  (Unless interpreting them as secret Russian or Chinese craft.  Terrific, as that would necessitate higher military spending)

Compare this timid approach to that of Aussie physicist John Webb, who - after a number of experiments - challenged the belief that the fine structure constant (a) was really a constant. At the time his "heresy" came out it was not too different from a religionist asserting the Pope is not really infallible. (Or, that aliens are real and already whipping through terrestrial skies.)

In the case of Webb, his attention was turned to the spectrum of a quasar 12 billion light years distant.  In this case the object's light had traveled 12 billion light years to the Keck telescope in Hawaii - on the summit of Mauna Kea.  Except in this case not all the light arrived, contrary to the predictions of the fine structure constant.  When Webb did finally identify the missing absorption lines, there was one problem: they were all slightly out of place as if someone had 'nudged' the spectrum.  Nor was this just a case of a Doppler shift, given some lines were shifted a bit to the left, others to the right.

Once Webb sat down to do the calculations the only way the shifted lines made sense was if he made one little adjustment: allow that when the light transited the interstellar dust clouds en route to Earth the fine structure constant a was slightly different from what it is today - billions of years later.  In other words, a was not really a constant. At the time Webb made the revelation he was attacked mercilessly by fellow scientists. In his own words, "people had questioned his sanity that a constant of nature could change over time".

Much like those who report UFOs today - though the release of the military sightings is kind of unimpeachable statement these objects are as real as the asteroid that exploded over Chelyabinsk, Russia 8 years ago.  Still, the hesitancy to accept a craft from outside Earth remains strong.  Hence, the fallback provincialism that they might actually be "secret craft" of foreign origin, like from Russia or China,  which of course is idiotic.  The reason is that no known foreign craft can travel at 13,000 mph and do rotations in the process.  Hence, ipso facto the objects must be from an extra-terrestrial source - like it or not. (Also as one expert implied in the latter part of the segment, if the U.S. can't make these craft, no one else on Earth can!)

By comparison, the middle mind act of invoking "foreign craft" to explain these UFOs would be analogous to John Webb simply conceding he had to have made a "mistake" in his computations, rather than that the value of  a changes with time.  But he had the balls, the intestinal fortitude, not to cop out and do that.   Even if it meant taking the opprobrium, ridicule and wariness of colleagues.

Compare that to the Nimitz aviators (interviewed on 60 Minutes) who experienced the UFO interactions with their ship's radar and visual systems in 2004.  One of them, Lt. Alex Dietrich, obviously self-conscious about being interviewed by Whitaker, agreeing that: "Your mind tries  to make sense of it.  So I'll categorize it as a helicopter or a drone."  But that's not making sense, it's opting for the most pedestrian hypotheses, e.g. "helicopters or drones"  which makes zero sense, given the dynamics.  Not when one's instruments disclose craft undergoing 600-700 g forces, no obvious means of propulsion, no control surfaces, and oh yeah - able to travel underwater and shoot into the sky and then go at 13,000 mph.  But she was too marooned in the middle mind and the UFO taboo to call a spade, a spade.  That she and her fellow navigators were observing an otherworldy craft doing literal aerodynamic backflips around their own F -18s.

In the case of the reluctance to call the UFOs spotted crossing into restricted U.S. air space what they are - extraterrestrial craft- we are also up against the "UFO taboo".    This was first articulated in a paper in the journal Politics Today appearing some years ago, e.g.

This   "UFO taboo" has come to mean the aversion to scientifically studying this phenomenon because it risks larger societal derision and even ostracism.   But it can also refer to the reluctance of military pilots - like Lt. Alex Dietrich (in her 60 Minutes interview) to call a spade and spade in acknowledging an extraterrestrial craft - as opposed to "drones or foreign craft."
This also explains Harvard astronomer Avi Loeb's dismissal of UFOs as extraterrestrial craft - asserting that "there is no scientific credibility" to the claim. But these military pilot- procured videos using infrared, advanced radar and other instruments show that there is.  Loeb's refusal to admit it discloses he is not as much an objective scientist as he believes.
At least Carl Sagan ultimately recognized the folly and provincialism of his own skepticism. This was revealed by the late Northwestern University astronomer J. Allen Hynek who disclosed Sagan had admitted he "did accept the validity of UFOs" (e.g. as alien craft) but "couldn't do so in front of his colleagues."  See e.g.
https://setiathome.berkeley.edu/forum_thread.php?id=76926
One further point:  If we can only admit that what is being seen in our skies (e.g. by the military pilots    https://youtu.be/Ce6ZevfbIK0 )
is real and alien, then the so-called Fermi paradox is solved. Recall according to that paradox: Given the number of stars in the universe, it is highly probable that alien life exists. So why haven't we seen it yet?  Where is everybody?'
Well,  their craft are flying circles around our own, and transiting our skies with impunity - even into restricted air space. But too many of us are still trapped inside the plodding, pedestrian  "middle mind" to think and see outside the box to admit it.

In the News
Come On Down! 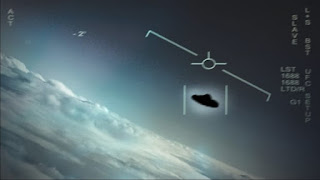 Posted by Copernicus at 6:48 AM