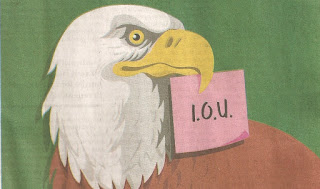 What the hell happened to our tax refund?  We had asked ourselves this multiple times since we mailed in our forms back in February.   After trying to get through on the phone to the IRS we realized it was  futile effort and conceded we'd just have to wait.

Then we saw (and read) the piece in the WSJ Exchange section 'Where Is My Refund? Millions Are Waiting',  May 8-9, p. B1) and realized we weren't the only ones still waiting.

We learned 72-year old Dan Schoenhert was still awaiting his $8,000 refund ($6,200 more than ours) since Feb. 16 when he was notified by the IRS his return was accepted.  But  "since then, nothing".   And this was after using the 'Where's My Refund?' tool - which we also tried,  getting the same response as Dan:  "We cannot provide any information about your refund."  What gives?

According to the WSJ columnist, Laura Saunders:

"Mr. Schoenhert is far from alone.This year a host of problems rooted in the Covid 19 pandemic have led to unprecedented customer service problems at the IRS.  They include delayed processing - and refunds - for millions of 2019 and 2020 returns, a frustrating inability to reach the IRS by phone and 280,000 notices saying taxpayers failed to file 2019 returns when they likely had,  among other things."

Ms. Saunders added that "even the professionals who have dedicated phones lines to the IRS are frustrated."

But how could it get this bad, this slow?  Ms. Saunders points to several issues that we taxpayers need to recognize:

-  The IRS has had to do more with much less, including 15% fewer employees in 2020 than in 2010.  (You can largely thank Trump for hollowing out the federal workforce)

- Because of the pandemic the agency has had to delay two annual filing deadlines,  while coordinating a total of 470 million stimulus payments to individuals -  many of whom weren't in its system.

-  Add to that having to apply tax law changes for 2020 that Congress mandated in March 2021.  (This after millions of filers had already submitted returns.)

-  This in addition to staffing and logistical challenges posed by the pandemic.

How bad, how unreal, did it get?

"In some cases, paper returns and envelopes containing checks piled up in trailers for want of people to process them.  The IRS then had to move them around to offices with available staffers."

Of course, our returns were in paper form - not electronically filed- because with tax issues peculiar to both Barbados and the U.S.  (along with other nuanced inputs, e.g. calculation of tax on an ongoing Barbados annuity) there was simply no electronic (IRS e-file system) accounting of them.

Meanwhile, the IRS call volume, according to IRS Commissioner Chuck Rettig has more than doubled "to more than 1,500 per second at times."

Currently, the IRS is reviewing about 16 million 2020 returns, mostly because of tax changes last year.   It is also gearing up to send  checks to millions of families this summer - as upfront payments of child tax credits - as part of the American Rescue Act.   These cash credits won't otherwise be received until the families  file their 2021 returns.

So what can people awaiting refunds do in the meantime?

- Don't call the IRS in most cases: According to data from the National Taxpayer Advocate, only about 2 in 100 phone calls are getting through.  Even then "the staffer often won't be able to answer the question."

- Understand tax refund delays:  The IRS is still processing about one million individual returns filed last year, many of them on paper.  (N.B.  Not all of these filers - like us - were Luddites.  The IRS e-file system simply can't handle certain forms or documents, like the tax on foreign annuities.)  These exceptional paper returns take longer because they have to be keyed in by individuals.   The IRS is moving returns to different offices to deal with the backlog.

Bottom line, we have discovered a newfound patience, thanks to this informative  WSJ article.  Hopefully any others looking for their tax refunds will also find this information useful.  And especially encourage patience as besieged staffers seek to expedite millions of refunds for the past two years!