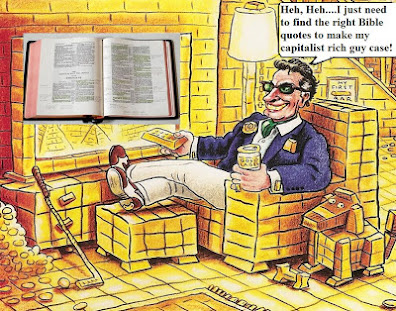 A recent review of the Benjamin  M. Friedman book 'Religion and the Rise Of Capitalism' (WSJ,  Jan. 30-31, p. C7) by David Sakel  sought to depict the title as misleading.    As Sakel put it:  "Friedman's narrative is about the evolution of economic thought, not capitalism."  But this is kind of like the difference between tweedledum and tweedledee -  and in any case makes a highly technical difference -  which doesn't advance one's comprehension of either economic thought or capitalism.

The cold hard fact is that capitalism - dating from its inception with trade in the middle ages- dictated economic thought at least until the arrival of Keynesianism (and monetarism) in the 20th century.  And leading directly into that were a number of bestselling treatises penned in the 19th century - as Friedman notes - by "minister scholars".  These included the Rev. John McVickar - professor of moral philosophy at Columbia- and the Rev. Francis Wayland. president of Brown. Both saw market pricing as the "ticket to prosperity".  A more important observation by Sakel concerns the German sociologist Max Weber who "attributed capitalism and America's economic success to Calvinist merchants who were anxious to proved they were among the "saved".

Here is where American economic thought was hijacked directly by a form of theological capitalism which saw success as being tied inextricably to Christian moral rectitude and by extension hard work.  If one worked hard he was more likely to be moral and especially a moral Christian.   But as Sakel points out, Friedman tried to "flip this on its head, rejecting the idea that  Calvinism was the key stimulus for economic theory and capitalism."   But it turns out that the predatory capitalism of the time needed not only Calvinist overtones but Herbert Spencer's Social Darwinism as well.

Just a brief foray into American religious history of the 19th century will identify the Rev. Josiah Strong, Secretary of The Evangelical Society of the United States, as one of the leading defenders of biblical capitalism. Indeed, in his controversial book, Our Country - Its Possible Future and Its Present Crisis, Strong set out his manifesto that those who were poor or couldn't succeed like the robber barons could only blame their own lack of moral fiber, or Christian righteousness. THEY were at fault!   Carried into the economic domain of the 21st century those on welfare or even receiving any government benefit would also be so pigeonholed.

Indeed, Strong's genius was to arrive at a "potion" that blended Herbert Spencer's Social Darwinism (increasingly finding favor with wealthy elitists and arch-capitalists) with Christian virtue, and a strict, constructionist view of The Constitution. Like Spencer, Strong pooh-poohed services for the poor and disabled as "encouraging a fundamental weakness in the society which induced corruption, sloth and all the other vices".People needed to be put through a "caldron" and - if they survived- they'd find God, spiritual life and work for their own wealth instead of bleeding it off the state.  Or demanding the state support them even briefly.  One of Strong's  favorite quotes was from Herbert Spencer, regarding all dependent citizens:"If they are sufficiently complete to live, they do live, and it is well that they should live. If they are not sufficiently complete to live, they die, and it is best that they should die."In line with this, as Richard Hofstadter points out ('Social Darwinism In American Thought') Spencer absolutely repudiated all state assistance to the poor, needy, physically feeble, or infirm. In terms of the role of natural selection in “social evolution” such aid amounted to unwanted artificial interference in nature. Not to mention, meddling in the “natural development” of a superior society. Thus, the poor and infirm were deemed “unfit” if they couldn’t compete for resources without state assistance and it was their lot to be eliminated if they couldn’t manage. As Spencer put it (ibid.):

"The whole effort of nature is to get rid of such, to clear the world of them, and make room for better. "
The capper was tying the amassing of great wealth to superior genetic or inherited traits as well as Christian virtue. Thus, one's wealth immediately became a barometer for one's morality or spirituality. In a real way, latter day Xtian capitalists (like William McGurn, an op-ed troll for the WSJ)  have merely regurgitated this vile bunkum but under the pseudo-righteous banner of Christian normality and decency.  Perhaps trumping even McGurn's quasi Christianoid dreck is Aryeh Speros - best known for an WSJ column some years earlier that caused a furor ("The Myth Of Starving Americans").
In that infamous piece  Speros writes:"The Bible's proclamation that 'Six days shall ye work' is its recognition that on a day -to-day basis work is the engine that brings about man's inner state of personal responsibility.'REALLY? So, what if millions ARE working - even at two low wage jobs- but they can't earn enough to feed their kids through the month?   We are talking of major food insecurity here, and a condition that afflicted millions of our countrymen during the pandemic.  Are they to still deny themselves food stamp assistance or what he calls "entitlements that undermine that noble goal". So is it more moral to starve than reach for what Speros would call a government "handout"? And how far will that pridefulness get the citizen? Maybe to the grave?Speros' nonsense, as well as McGurn's and especially Kimberly Strassel's during the pandemic,  all echoed the stern proto-Calvinist bunkum of Josiah Strong. Along with other WSJ contributors during 2020 (including Ron Johnson) they all echoed the same blather that instead of accepting government handouts the affected workers ought to raid their own 401ks (if they have such) or make an IRS request to borrow from their Social Security.
But these anti-worker nabobs merely join more recent and  notable predecessors, like Charles Murray, author of The Bell Curve and more recently 'Coming Apart'.  In the latter he describes the descent of working class whites because of dependence on gov't handouts. Thus, these latter day dregs have now become detached from the "four founding virtues of industriousness, honesty, marriage and religion".  He even goes so far as to intimate a reduction in IQ from exposure to statism. ( 40% of white females with just a high school diploma have children outside of marriage, compared to 5% with college degrees.)
Even now these cruel minions are screaming "Socialism!"  because portions of the American Rescue Act are expanding the ACA , especially to those between the ages of 50 and 64.   According to the AARP Bulletin (May, p. 2) this will help an estimated 5.6 million Americans not yet eligible for Medicare.   The latter day GOP austerity hawks are also grousing about  $86 b from the same Covid relief act to shore up multi-employer pension plans.   Chuck Grassley - quoted in the same AARP Bulletin- spouted: "It's just a blank check to do whatever!"  No, turkey, it's a specific and limited "check" to ensure ordinary workers don't get screwed out of their retirement support.   After all, not everyone has 'Cadillac' pension plans like you and your cohort.
But Grassley and his ilk  are especially going bonkers about expanding unemployment benefits by $300 a week, as if that qualifies as a king's ransom.  Or at least enough to keep people from working, (See previous post).
Sakel is correct that - as Friedman notes - "Economics has become more mature as a discipline".  But the problem is that without the self-correcting process of genuine empirical science it has allowed erroneous claptrap to creep in and hobble its further maturation.  That includes economic toxins like trickle down economics - a derivative of the old Calvinist thought - as well as Pareto efficiency, which values the capital of the rich over the dollars of the poor, e.g.
See Also:
Wealth Inequality
CEO Pay Skyrocketed at Corporations While Their Low-Wage Workers Suffered in the Pandemic
by Sarah Anderson | May 12, 2021 - 6:04am | permalink