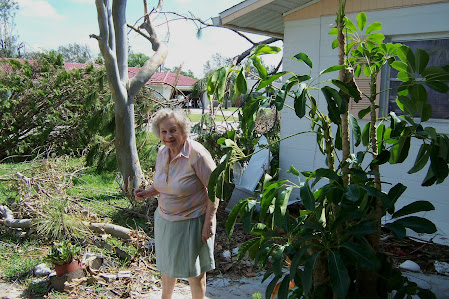 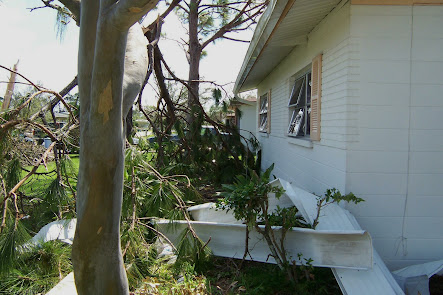 As much ado is currently made regarding the accuracy of forecasts for Hurricane Ian - especially in its approach to southwest Florida, Fort Myers and the critical evacuation orders - many forget Hurricane Charley back in August, 2004.  My parents never did.  They were living in Port Charlotte, Florida, about 40 miles north of Fort Myers at the time and had turned in the night of Aug. 12th expecting the monster storm (whose name has now been permanently retired) would strike north in Tampa Bay.

But about two hours before landfall, the National Hurricane Center issued a special advisory, notifying the public that Charley had become a 145 mph (235 km/h) Category 4 hurricane, with a predicted landfall location in the Port Charlotte area. As a result of this change in forecast, thousands of people (mainly seniors) in the Charlotte County area were unprepared for the hurricane, although the new track prediction was well within the previous forecast's margin of error.

My parents were only spared the worst because they happened to tune into Jim Farrell, a forecaster at   WINK in Fort Myers. who predicted that Charley was going to turn early into the Florida southwest Gulf coast, striking around Charlotte Harbor .   Farrell's forecast was amazing, given it broke clearly with all the national media predictions of a Tampa Bay landfall as early as the morning of August 13.

The folks' good fortune in tuning in, spared their home the worst, and barely allowed time to "batten down the hatches" before the storm struck. As it was, mom said the next several hours were "horrific" and had her frantic with worry and fear as the ferocious winds ripped off parts of their roof (see photos above).  Those affected by Charlie were grateful for yet another unforeseen aspect, that it was one of the fastest moving 'canes, crossing the Florida peninsula in about 7 hours.  This as opposed to Ian's slow-paced movement and consequent drenching effects, flooding.

Nonetheless, the commonality between the two hurricanes was the uncertainty in forecasting precise landfall, which is a function of the stochastic nature of the science of meteorology.  Thus, each major storm was originally predicted to slam into the Tampa Bay area, but in fact struck significantly further south, Ian arriving at Cayo Costa- a small island just off Fort Myers, and Charley over Punta Gorda, just south of Port Charlotte, e.g. 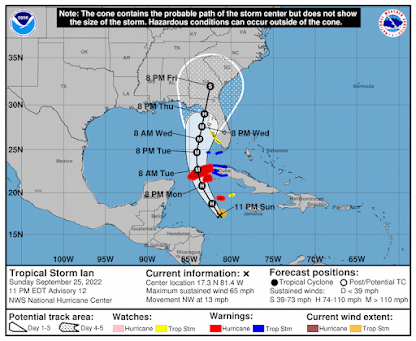 The cone of probability for Ian's landfall

From the images above, one can see that it's folly to blame forecasters for failure to make correct predictions given all locations involved were within the cone of uncertainty.   Didn't hit Tampa, hit Fort Myers instead and clobbered Sanibel Island?  Okay, but Tampa was still positioned in the cone.  Charley clobbered Port Charlotte and Punta Gorda instead of Tampa?  True, but all were within the cone of uncertainty.   The takeaway here is that neither the forecasters can be blamed or the local officials who gave evacuation orders.  They delivered those order as soon as the most reliable paths became available.  Let's also note that giving such orders too early is not necessarily a good thing, given a "miss" would merely confirm for cynics that the forecasts are no use anyway, so why leave my precious property?  (Even with the evac orders many still chose to remain behind.)

The  aftermath of Charley saw 29 fatalities and an estimated $6 billion in property damage. The cleanup took over a week, and while the home insurance paid for most of the folks' home repairs it didn't cover flood damage.  Also, their premium for the next year would be raised by $350/month.  Of course, they were unable to pay such a fantastic amount on fixed Social Security incomes.  Hence, by late September 2004, they were forced to sell their place to a peripatetic home "flipper" and had to move into an assisted living facility called 'Royal Palms Retirement Village'.

Mom loved the new digs, but frankly, dad hated it because he could no longer cook his own meals the way he wanted. Also, eating mainly meant going down to the community cafeteria three times a day, where everyone was watching everyone else.  Alas, too, the food (prepared by special dieticians) was somewhat bland, little salt. (I can vouch for that, eating a lunch with mom in July, 2009, two days after dad's funeral.)

Florida faced a housing crisis. Ian has made it worse.

— from the Toronto Star 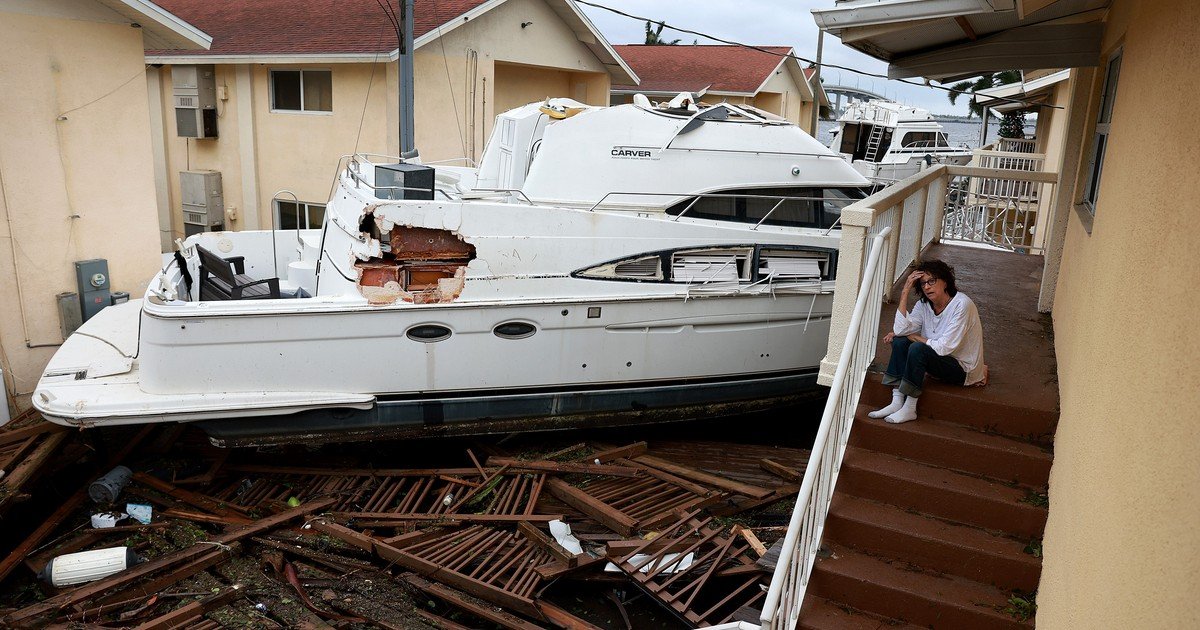 Watching images of hurricane devastation is, of course, disturbing. But imagine what it’s like watching all that destruction and suffering, while secretly knowing you bear responsibility for it.