Does "Counterfeit Catholicism" Even Mean Anything Given The Vast Domain Of Counterfeit Faith? 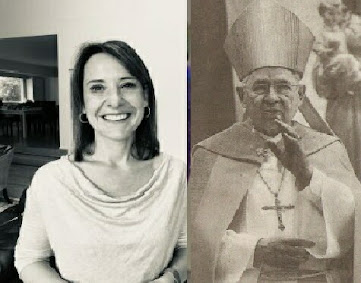 “Religions are like bullies. One feature of bullying is that attacks are often made for no reason, aside from the ease of attacking the target. Such attacks can be used to establish dominance, or at least a reputation as someone to be feared and obeyed. …By forcing obedience in trivial matters – even harmless ones- religious leaders establish a reputation for punishment that allows dominance in more meaningful aspects of life. In this view the content of rules is relatively arbitrary"  - Skeptic magazine, (Vol. 15, No. 2, 2009)

"When we give up on reason, the only tool we have left is coercion."-   Julian Baggini ('The Edge of Reason')

In her WSJ op-ed (Counterfeit Catholicism, Sept. 23rd, p. A13), Prof. Andrea Picciotti-Bayer offered what she hypothesized are two extreme, counterfeit forms of that faith.  On the one hand we read:

"Two of the nation’s most prominent Catholic politicians, President Joe Biden and Speaker Nancy Pelosi, have unequivocally abandoned the church’s teaching on the dignity of human life from conception onward."

And on the other:

"Meanwhile, despite the Supreme Court’s reversal of Roe v. Wade, a group of Catholic hard-liners in the academy and media have written off American institutions as hopelessly compromised and demand that all public life be radically reoriented along strictly Catholic lines."

"Neither offering is distinctly Catholic, yet both are given national airing. What are ordinary Catholics to do?"

Well, the first thing would be to notch down the sense of importance or authority. As Amanda Marcotte wrote in her Salon.com piece Aug. 2nd:

Religion, especially Christianity — while still powerful in American culture — is in decline. Fewer than half of Americans even belong to a church or other house of worship.

That's a good first barometer to use to judge what an "ordinary Catholic" is to do.  That is, minimize one's faith, doctrinal teachings in all interactions. And especially do not quote, cite or mention past papal encyclicals or "natural law" doctrines.    Thereby, one can determine the latter subset of "hard line" Catholics to which Piccoti-Bayer refers are out to lunch on their face.

The second step, in reference to her criticism of Biden- Pelosi  type Catholics who defend abortion and artificial birth control, is to keep in mind which part of Lawrence Kohlinger's moral pyramid she's coming from: 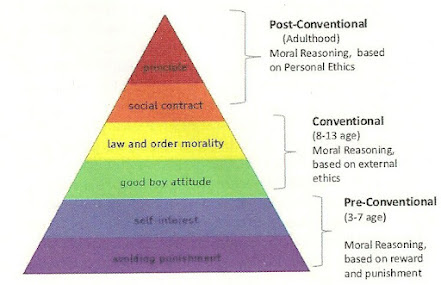 That pyramid is shown above for reference and as an ex- Catholic, I can say it's clear she is referencing the "pre-conventional" moral standard - the lowest of all,  I.e most applicable to those humans just above the 'rugrat' (AGES 3-7) stage.  "Billy, you must not poop on the floor, do it on the potty! Or Mommy will spank you!" .   Too insulting you say?  Then you know nothing of Catholicism's dogmas, decrees and Canon law -  including the prescription of punishments for all the assorted "sins" - most of a sexual nature.  Basically, as one writer has noted, we have an institution which displays an over reliance on indoctrination and authoritarian moral commands, despite having lost all moral authority from the sexual abuse crisis.
Does Picciotti-Bayer process or factor into account any of this? No, she simply doubles down on her misguided Church's doctrinal positions as she writes:

"In a misguided attempt to reconcile Catholicism with modernity, many American Catholics have begun to embrace progressive ideologies that Archbishop José Gómez of Los Angeles calls “profoundly atheistic.” From critical race theory to gender ideology, these ideas “deny the soul the spiritual, transcendent dimension of human nature; or they think that it is irrelevant to human happiness,” Archbishop Gómez has said. Some Catholics— perhaps inspired by dissident Catholic politicians— even promote abortion."

First, as I've written before, e.g.

Jose Gomez has no clue what he is talking about,  as I wrote:

Does he really expect the president of 330 million with dozens of creeds, beliefs and moral positions can dictate one religion's moral values?  ...Take abortion.  It is now acknowledged by progressive secular Catholics as fundamental to a woman's control over her own body as well as her physical welfare.  The notion of "moral evil" is itself absurd, given as Ethics professor Cheryl Mendelson has pointed out  ('The Good Life', p. 157):

"The premoral mind confuses the disgusting with the wrong and retains an infantile fear of things sexual. Its rationality is overcome by emotion, fantasy, wish and projection. The belief that extracting a 10-week fetus from a woman's womb is murder rests to a large extent on the sense of disgust aroused by the thought of destruction of living tissue.
When fundamentalists insist on risking the life of the mother to deliver an anencephalic fetus they take this tendency to an extreme. People who think this way are unable to override disgust with rational appreciation of the objective characteristics of the fetus. The ability to do so is an indispensable trait of the moral mind."
Cheryl Mendelson at least has a grasp of the moral mind which itself is tied inextricably to the highest realm of Kohlinger's moral pyramid, i.e. "moral reasoning based on personal ethics".   This as opposed to morality imposed by a hierarchy of fossils, themselves morally bankrupt.  In other words, the basis for exercise of a truly moral mind, as opposed to a pre-moral, authoritarian one presumes the capacity for critical reasoning.   To fix ideas, here is Mendelson again, on the sort of "morality" espoused by Archbishop Gomez, as well as Picciotti-Bayer:
"To regard the destruction of insensate agglomerations of cells that contain human DNA as the destruction of a person's life is to step outside the moral into the brutal and dangerously irrational kind of thought that substitutes taboo for reason. It is a regression to quasi-magical thinking."

Those Catholics Piccotti-Bayer accuses of embracing "progressive ideologies" are, in fact, embracing (and using) higher moral reasoning to achieve effective personal ethics.  Which, truth be told, carries vastly more power than the dogmatic anti-sexual tropes spouted by padres and bishops who preach chastity and "respect for life" yet have no issues with the abuse of innocent children.  And the popes - like John Paul II - who moved these despicables from parish to parish to protect them and the Church. See e.g.

Revoke "Sainthood" For Pope John Paul II ? It Should Have Been Done Long Ago

"The antidote to problems fracturing our country won’t be found in counterfeit Catholic teaching that sows yet more division. It will be found in engagement with authentic, American witnesses of the faith."

This surely factors into the entire adjacent argument that basically, all religions are counterfeit because they subscribe to a realm (the "supernatural") which does not exist.  I pointed this out at length in a Physics Today letter from 4 years ago, i.e.

Readers' thoughts on science and religion: Physics Today: Vol 71, No 6

From a scientific and objective standpoint, there is simply no way that any purportedly supernatural entity or order can be demonstrated or proven. No scientific methodologies for such exist, nor any credible instruments or measuring techniques. The rejoinder that those things can't be measured merely reinforces the argument that they are no more fit for scientific inquiry than the astrologer’s claim of “malefic” influences of Mars at an infant’s birth.
Because a supernatural domain cannot be approached in any scientific or objective way, then by my reckoning it doesn't exist. One need not even deny its existence because to all intents the supernatural entity becomes logically unnecessary or redundant. It doesn't help us make scientific predictions or explain natural phenomena—say, coronal mass ejections or auroral substorms.

What more needs to be said? Gomez as well as Picciotti-Bayer are chasing phantoms of the supernatural when they attempt to form arguments based on supernatural authority and dogma, as opposed to natural (not natural law!) reasoning.   In addition, let me make it clear that a healthy engagement with politics, as well as care for the natural environment, does not require religion to be effective. The main quality needed is to face the truth, whether the Big Lie destroying our political fabric (not modernist Catholics, according to Picciotti-Bayer) or the climate denial threatening our environment, our planet.

We do not need the supernatural, in other words, to defend or support the natural order. Instead, it is a wild card element that can be grossly misused to sow toxic division  - such as when dogmatic bishops try to deny Biden communion, or mindless QAnon morons - fueled by evangelicalism - seek to overturn our elections.

The mistake made by Jose Gomez as well as Andrea Picciotti-Bayer is one typical of ardent Catholic religionists and ancient - based on Manicheanism.  That is, that all humans - being of the wicked flesh - are inherently weak creatures in needs of authoritarian direction and indoctrination.(For more on this, see the excellent monograph 'Eunuchs For the Kingdom of Heaven' by Ute Ranke-Heinemann, Doubleday, 1990).