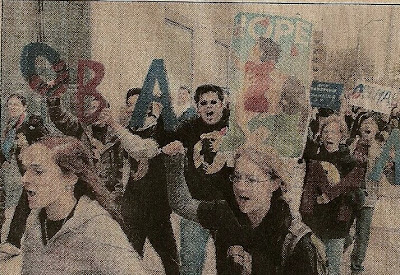 College age voters in 2008 had no doubt who and what they were voting for as they yelled 'Obamanos!' on way to polls
Ah well!  Just when one garnered some hope the younger voting demographic would get committed to the Democrats after they benefited from Biden's executive order on college loan forgiveness, we learn they are "confused".   According to a front page LA Times piece on Monday ('Voters Not Apathetic But Anxious')  clarified in the sub-header:  Many 18-29 year olds fear they are ill-prepared for weighty choices.
Uh, why exactly?  Do you have a brain?  Can you read?  Can you learn?  Can you tell the difference between a pack of rabid, racist halfwits and a real political party that has your interests at heart? This is not rocket science, or even differential geometry, my young confused friends!
But according to the piece, one youngster actually moaned: "I don't know how to do this. Like it's a huge step.  I don't want to make the wrong decision."
Son, you won't,  provided you simply vote Democrat throughout the ballot, i.e. wherever you see a 'D' next to the name.  Again, the other side who claims they are real lawmakers are nothing of the sort. They are slime, racist pig crackers and will rip this nation to shreds if they are handed power by an oblivious - or ignorant - electorate. E.g.
The GOP Is a Cultish, Destructive Fascist Organization — Not a Legitimate Political Party
Have more reason to doubt? Then you need to read my post from Sept. 27:
Bottom line the claim (ibid.)  that "some of the country's least experienced voters feel unprepared to make such weighty choices" is just plain balderdash.  Why? Because the differences between the two parties and their candidates are as wide as the Pacific  - metaphorically. One side (Repukes) is for destroying democracy and simply exercising raw power (read my 9/27 post), the other (Democrats) is for actually doing things:  passing legislation - such as the already passed infrastructure bill, the Chips bill, and the inflation reduction bill, as well as Biden's executive order to relieve student debt, e.g.
After Biden's Loan Forgiveness Action Young Voters Have No Excuses Not To Show Up In November - FOR Dems!
Yet, disturbingly, another young would-be voter quoted in the piece, whined:
"If I can't even get to school on time, or make my bed in the morning, then why should I be able to go make a big decision in a voting booth?"
Kid, if you can't get to school on time or make your bed in the morning, you are probably still a child.  So in that case, yeah, I suggest maybe you stay home and play video games or Tiddly winks rather than go to a polling both.  But the Times' piece does carry a serious undertone we'd be unwise to ignore, i.e.
"there is an abiding sense of paralysis which is an under appreciated dynamic in the crucial voting bloc of 18-29 year olds whom politicians tend to court with cringeworthy social media stunts."
And there's the solution, right there. Breaking away from social media and the politicos' "cringeworthy" stunts.   Drop the damn cell phones, then,, and either read an actual newspaper from the local newsstand or access a paper online, e.g.
The New York Times - Breaking News, US News, World News and Videos (nytimes.com)
The fact that tricks can be used on social media spaces like Twitter, or god forbid Trump's Twitter ripoff (Truth Social), shows clearly that if you want to avoid scrambled brains before an election you have to have the sense not to go there. You go for 'meat and potatoes' in the real news domain.  You can also gain a lot of insight by reading blogs like mine, which not only include posts on physics, math and astronomy, but politics, economics and religion.
Lack the desire to get into the political "weeds"?  Easy! You just vote a straight Democratic ticket and make other choices - i.e. in amendments and ancillary ballot issues- that are there to improve or enhance the welfare of the commonweal, including tax increases, not cuts.  To see an illustration of my own ballot choices, see this post for the 2020 General election:
YES! We Received Our Mail Ballots & Completed Them! Take That, Dotard!
Good luck, and don't lose heart. The main thing is to keep your wits about you and don't be misled by grifters, liars and election deniers, i.e the Republican clan.    For those mature enough to use reason and think, draw sound conclusions, I suggest reading this piece from The Washington Post,

What will happen to America if Trump wins again? Experts helped us game it out.

while noting that your votes in the mid-terms will set the stage for what happens in the general election two years hence.  An excerpt from the above article:
" I turned to 21 experts in the presidency, political science, public administration, the military, intelligence, foreign affairs, economics and civil rights. They sketched chillingly plausible chains of potential actions and reactions that could unravel the nation. “I think it would be the end of the republic,” says Princeton University professor Sean Wilentz, one of the historians President Biden consulted in August about America’s teetering democracy. “It would be a kind of overthrow from within. … It would be a coup of the way we’ve always understood America.....Racism, including violent racism, is likely to increase. “The most immediate concern of Trump returning to the presidency is it would provide the greatest domestic terrorist threat of our time — violent white supremacist organizations — the ability to rebuild and spread and engage in even more violence and terror,”
Read and process the preceding, my young voter friends, and be assured you will not make a mistake in your voting choices if you vote D.  It's actually quite simple: you are either for the good guys, or the bad guys - and the worst bad guy of all, Donald John Trump!
See Also:
Why Voting and Celebration Should Go Hand-in-Hand on College Campuses
by Monica A. Bustinza | October 23, 2022 - 7:17am | permalink 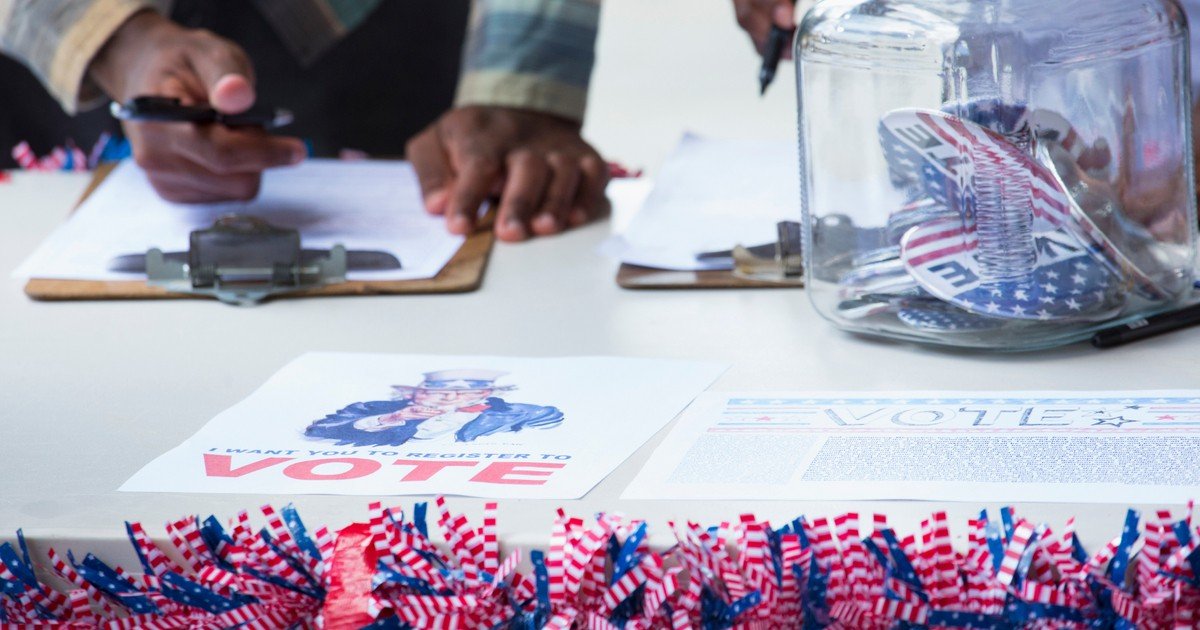 I've dedicated much of the past decade to growing and empowering civic engagement at Miami Dade College—the largest community college in Florida and home to one of the most racially, ethnically, culturally, and socioeconomically diverse student populations in the country.

Every election season we run into an unfortunate reality about our state and country's democracy: It wasn't designed for our college community.

Many, if not most, of MDC's students face what's known as a "civic empowerment gap." They have had relatively few opportunities to gain the knowledge, skills, and confidence necessary to be active and influential participants in civic and political life. Many are non-native English speakers, were born in other countries, or are first-generation US citizens. Many grew up in working-class households, where issues related to government and politics seemed far-fetched compared to much more pressing and immediate needs.

And:
Republicans
House GOP Promises Vengeance on Democrats for Doing Good Stuff While in Power
by Joan McCarter | October 11, 2022 - 7:34am | permalink 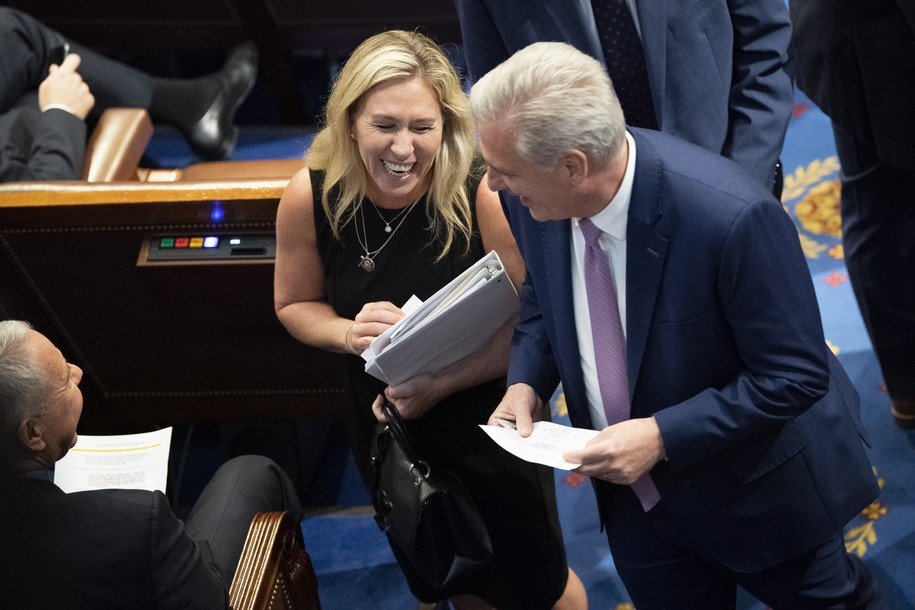 And:
2022 Elections
Looming Midterm Demands Again Airing Out the Nature and Extent of the Stupids
by Robert Becker | October 11, 2022 - 6:53am | permalink

In 1976, UC Berkeley professor and economic historian Carlo M. Cipolla exposed the appalling dangers and range of the Stupids, the very worst people because willful, entrenched ignorance eviscerates without apparent gain to their interests. These are the people who make news by checking their gas tanks with lit matches or unscrew plumbing connections without turning off the water supply. These are people who, despite placement on a cliff, decide to test whether reverse gear works – and are certain vaccines are far more dangerous than getting vaccinated so that everyone is less vulnerable. Yes, some are sure that bleach can fix viruses, even that magical thinking impacts reality and establishes truth.

In that sense Stupids are morally worse, and far less sympathetic, than criminals, hustlers or predators, who we understand have something to gain by disruption. Trump is the criminal who enriches himself by hoodwinking his fan base of Stupids, ready to donate and fight “rigged elections” when they are only filling the hustler’s wallet. That such manipulated Trump donors devastate a workable electoral system without gaining any real-world deliverables (election wins, jobs, pensions, services, 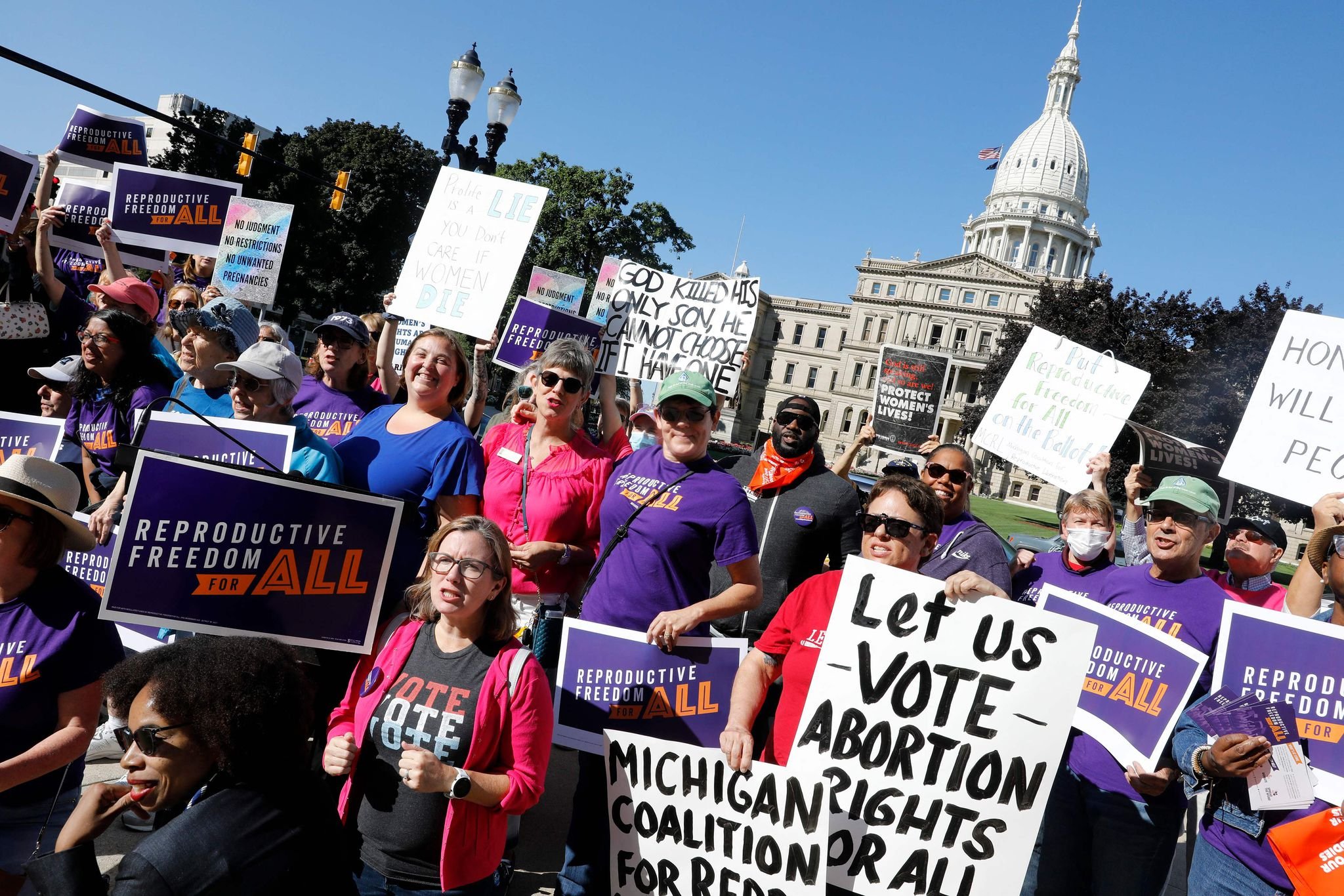 While MAGA, election-denying Republicans are over-represented in federal and statewide races this November, they’re really proliferating in state legislative races.

And:
Republicans
Here's the Brutal Truth: Republicans Have Given Up on Democracy
by Mitchell Zimmerman | October 9, 2022 - 7:27am | permalink 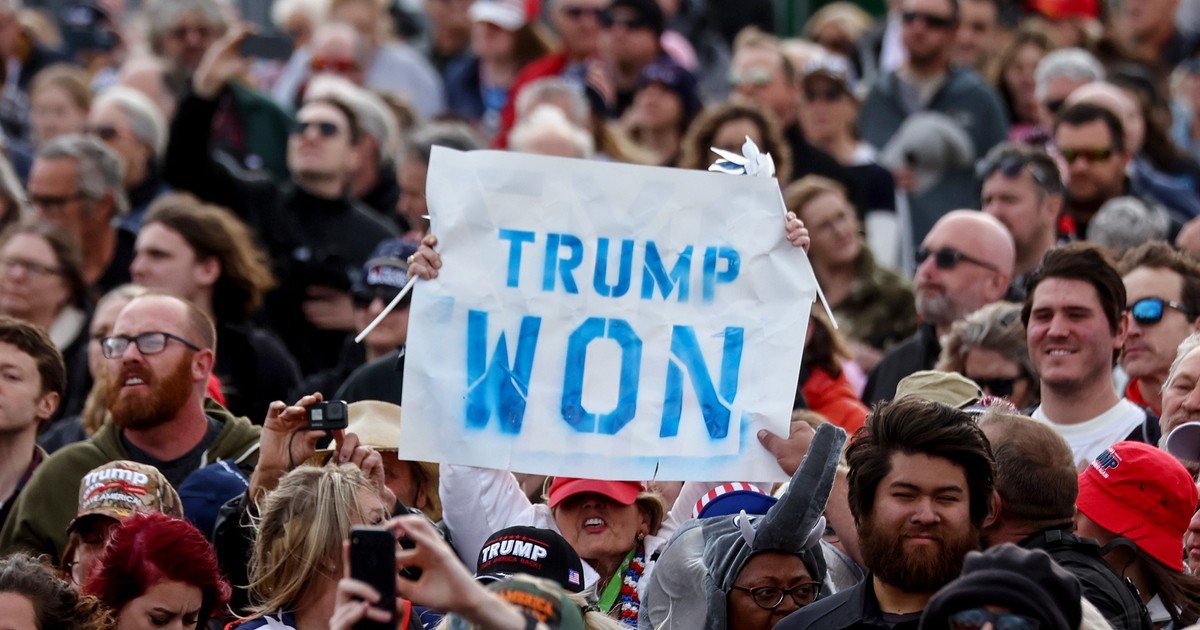 And:
Election Integrity | Republicans
Empowered GOP Election Deniers Are a Direct Threat to US Democracy
by Fred Wertheimer | October 8, 2022 - 5:37am | permalink 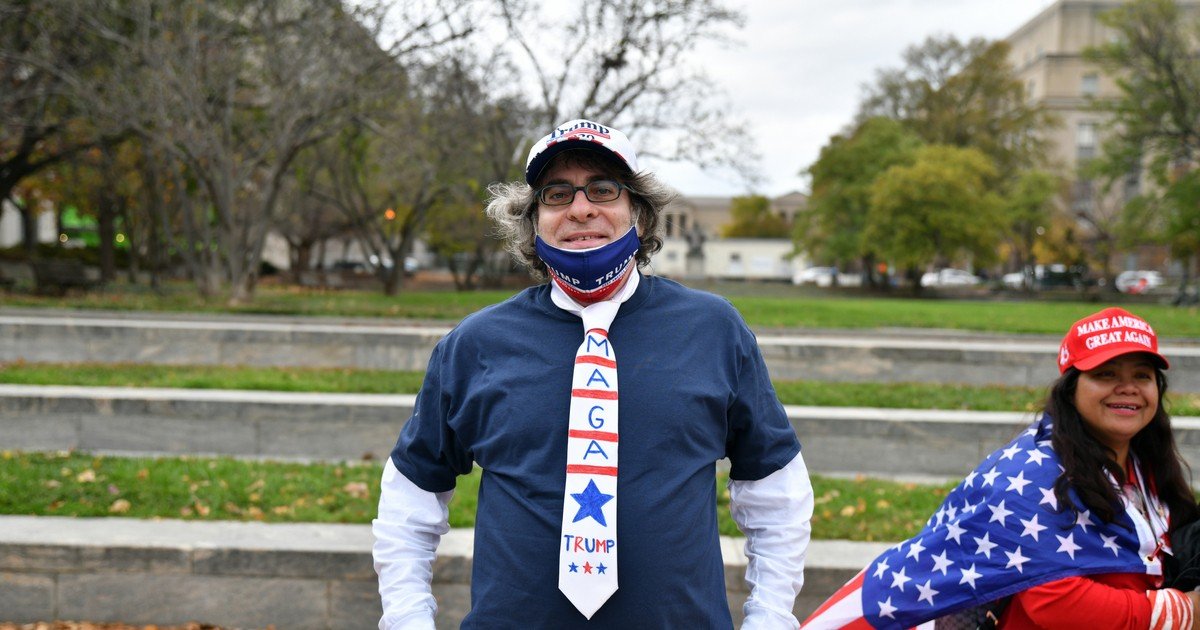 With less than five weeks to go, we are heading into dangerous and uncharted waters for the midterm elections.

Former President Trump’s continuous false claim, without a shred of evidence, that the 2020 presidential election was stolen from him was only the beginning of a nationwide effort to discredit the integrity of our elections.

Trump’s attacks spawned Republican clones in Congress and around the country who became known as “election deniers.”

A new Washington Post report found that “a majority of Republican nominees on the ballot this November for the House, Senate, and key statewide offices — 299 in all — have denied or questioned the outcome of the last presidential election.”

Posted by Copernicus at 6:49 AM