YES! Medicare Advantage Plans ARE "Insatiable Cash Monsters", Which Is Why I Avoid Them! (And You Should Too) 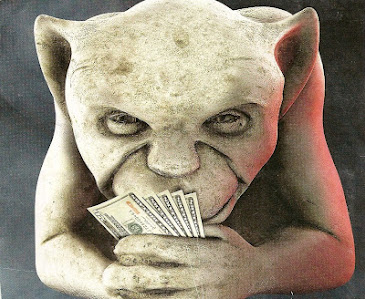 "Seniors buying Medicare Advantage plans often think — even though they know they’re getting the plan through an insurance company — that they’re somehow still in Medicare or backstopped by Medicare. The reality is they’re neither.

With Medicare Advantage, they’re at the total mercy of the insurance company providing the Advantage plan. They can deny care (and frequently do), refuse to pay for tests, and even refuse to authorize or pay for surgeries and other life-saving procedures.  This is their business model, in fact, just like with regular health insurance. The more they can deny care and claims, the more profit they make."  - Thomas Hartmann, Stop Medicare Advantage Plans Before Medicare Is Dead

The new Medicare enrollment period has begun but no insurance outfit should look to me to change to Medicare Advantage, i.e. from traditional Medicare. A recent (Oct. 9, p. 1A) NY Times piece by Reed Abelson and Margot Sanger-Katz described in detail how these plans are bleeding Medicare dry.  They are basically "insatiable cash monsters," in the words of one physician whistle blower from Kaiser Permanente, quoted in the Times.  This is while also shafting millions of beneficiaries who think they are actually part of traditional Medicare, but wake up when denied access to a diagnostic test.    (Full disclosure: Wifey and I from the get go have had traditional Medicare and deductible-based Medicare Supplements. We wanted no part of hastening Medicare's path to insolvency, which Medicare Advantage was always designed to do, despite the PR it was saving $$$.)

The recent Kiplinger Retirement Newsletter was clear on what is now happening to new Medicare Advantage beneficiaries: being denied access in record numbers.  Indeed, according to Kiplinger, at a rate nearly twice that before the pandemic struck in 2020.  Why?  Because the number of new Advantage beneficiaries has itself nearly doubled as we're now approaching the stage of nearly half of Medicare being privatized. (E.g. NY Times, 10/9): 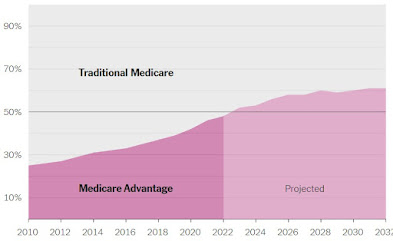 The advance of this profit first malignancy and private perversion of traditional Medicare is clear from the graphic above.  Why profit first? Because Kaiser Family Foundation, a research group unaffiliated with the insurer Kaiser, found the insurance companies typically earn twice as much gross profit from their Medicare Advantage plans as from other types of insurance.

Medicare Advantage (MA) was created by Gee Dumbya Bush and the Republicans with their Medicare Modernization Act of 2003. It basically confected a privatized form of Medicare ("Part C"), with the express purpose of bleeding regular (traditional) Medicare into insolvency by blowing up to $20-25 billion or more a year (based on gamed "risk scores")  and funneling much of it from the older program. Unless this (MA) program is killed (the sooner the better),  no other cuts will matter - because MA will metastasize to the point every $ is swallowed up.. For those who wish to read the details on why MA is hurling Medicare into insolvency check out the content in these links:

What does it mean that ever more access will be denied to seniors using it, and eventually to the rest of us in the original Medicare? Why?  Well, because as Kiplinger put it, the health insurance companies simply can't tolerate the burgeoning costs from the new enrollees which radically reduce their profit margins. There are too many of them and hence too many demands for services and access to treatments, hence the need for proportionate denials.  I suspect it is also a key reason for the increasing fraud by these same insurance companies, as reported Sunday in the NY Times (ibid.), e.g. 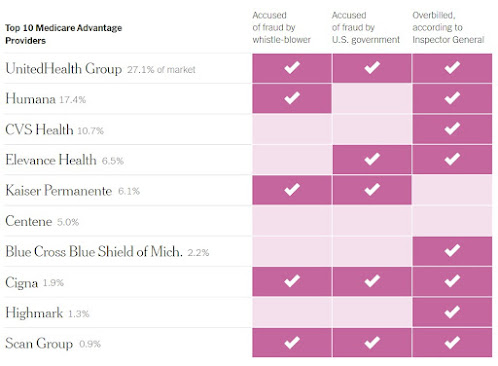 How accomplished?  Easy! Let doctors in the system diagnose illnesses which either (a) never existed in the first place, or diagnose conditions that were much worse than they actually were.  For (a),The diagnoses had a lucrative side effect: They let the insurers collect more money from the federal government’s Medicare Advantage program.

The government pays Medicare Advantage insurers a set amount for each person who enrolls, with higher rates for sicker patients. And the insurers, among the largest and most prosperous American companies (see preceding graphic), have developed elaborate systems to make their patients appear as sick as possible, often without providing additional treatment, according to the lawsuits. As a result, a program devised to help lower health care spending has instead become substantially more costly than the traditional government program it was meant to improve.

As the NY Times reported, "Eight of the 10 biggest Medicare Advantage insurers — representing more than two-thirds of the market — have submitted inflated bills, according to the federal audits. And four of the five largest players — UnitedHealth, Humana, Elevance and Kaiser — have faced federal lawsuits alleging that efforts to overdiagnose their customers crossed the line into fraud."

This is exactly why Medicare itself is heading for insolvency, likely within the next 3 years. The government now spends nearly as much on Medicare Advantage’s 29 million beneficiaries as on the Army and Navy combined. It’s enough money that even a small increase in the average patient’s bill adds up: The additional diagnoses led to $12 billion in overpayments in 2020, according to an estimate from the group that advises Medicare on payment policies.  And it will only get worse as more deluded seniors pile into the plans thinking they are a better deal than traditional Medicare.

Yeah, as the MA ads declare, traditional Medicare means you have to deal yearly with a deductible, say for the use of the Medicare Supplement plan.  But that is no biggie, and the usual cost is around $300, no more.  After that, you get access to the doctors, the specialists, the tests and treatments you need, none of this jumping through hoops B.S.  Or outright denials by the bean counters.

Just eyeballing my CMS Medicare Notices, I see that without traditional Medicare I'd have had to cough up a total of $16,025 for the PSMA scan done in July, e.g.

Plus another $709.00 for the radiographic analysis, interpretation.  Even if I was "lucky" to be in a less profit- oriented MA plan I'd likely have had to fight to have the scan covered by the MA policy.  And we won't even go into the thousands for the use of an oxygen concentrator to deal with my bronchiectasis.  So no, I am not changing to any Advantage plan because I understand there is no advantage to be gained, and certainly not to Medicare overall.

Healthcare Policy | Insurance
Here is the Truth: Medicare Advantage Is Neither Medicare Nor an Advantage 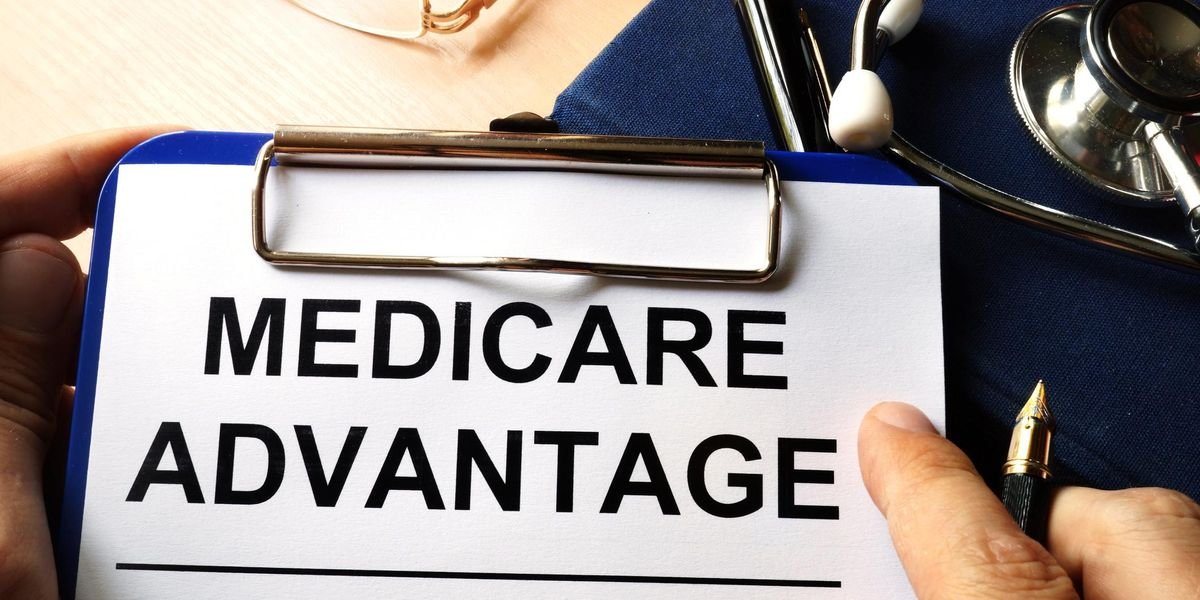 Right now, well-funded lobbyists from big health insurance companies are leading a campaign on Capitol Hill to get Members of Congress and Senators of both parties to sign on to a letter designed to put them on the record “expressing strong support” for the scam that is Medicare Advantage.

But here is the truth: Medicare Advantage is neither Medicare nor an advantage.

And I should know. I am a former health-care executive who helped develop PR and marketing schemes to sell these private insurance plans.

Stop the Medicare “Advantage” Scam Before Medicare is Dead 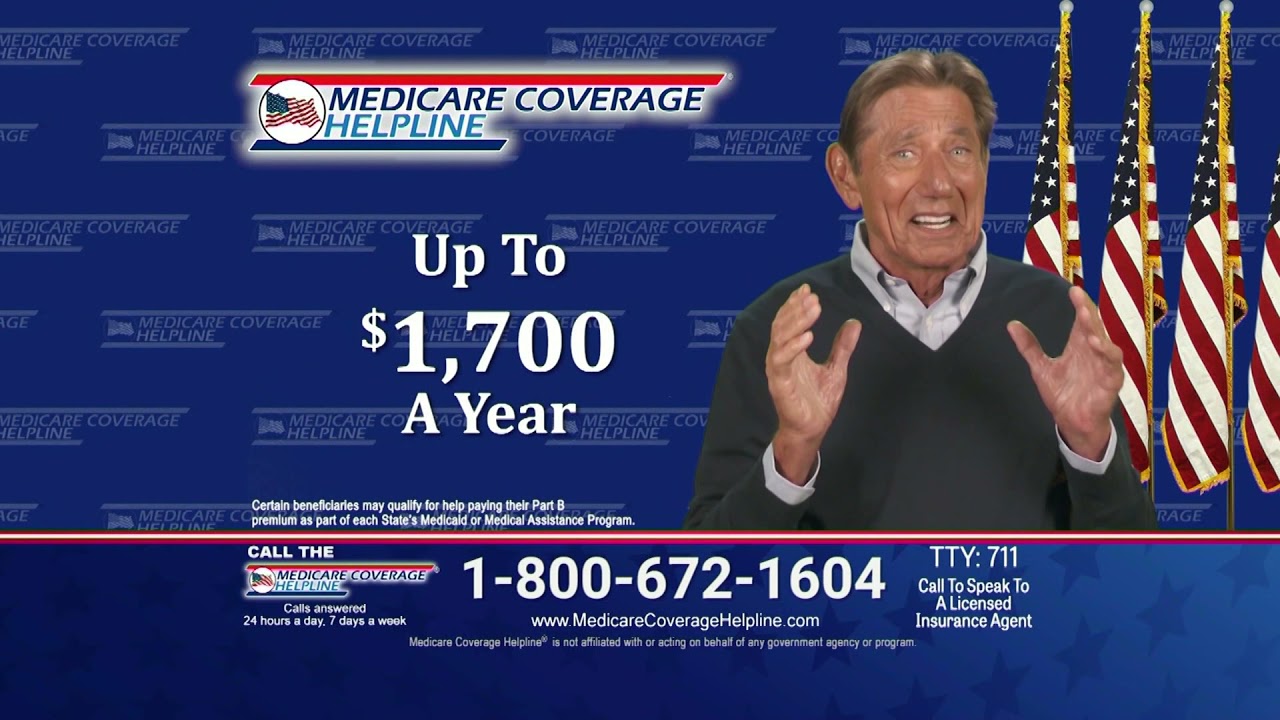 Congress must pass a law to stop the deceptive advertising of Medicare Advantage plans. Only Medicare should be able to call itself Medicare.

Unless you’ve been out of the country for the past few years, you’ve seen the ads on TV featuring Joe Namath, Jimmy Walker, or William Shatner hawking so-called “Medicare Advantage” plans.

Medicare Advantage is not Medicare.

It’s private health insurance being offered to people over 65, with the bill paid for by Medicare. Once you get on an Advantage plan it’s very difficult to get off, and if you’ve been on for more than a year you may not be able to go back to regular Medicare with a Medigap plan at all.

How Medicare Advantage Scammers Get Away With It In my multiple writings on the Medicare Advantage scam, the most common two responses I get (besides, “Thanks, you may have saved my life!”) are, “I’ve never had a problem with my Advantage plan,” and “If it’s so bad, how come so few people are saying so?”

Both are honest, good-faith questions and highlight how easy it is for insurance companies to get away with their Medicare Advantage scams. The answer to both boils down to the unique nature of insurance being the only “product” we buy where we have no idea if it’s any good until something bad happens — which can take years.

Every state in the union has an insurance commissioner. But why?

Why would any state go to the trouble and expense of creating a new layer of bureaucracy?

We don’t have “auto dealership commissioners” or “big-box retailer commissioners”: only insurance has an elected or appointed overseer.

Why would a state want to elect or appoint a very well-paid person to a new position in state government? Why would they appropriate money for a staff, for offices, in some cases even for buildings for a state insurance commissioner?

It turns out the answer is quite simple. One of the easiest scams in the history of scams, going all the way back centuries before Alfred Ponzi set up shop in Pie Alley, is done with insurance.

Here’s how it works.

If you have insurance, you send them a check every month. You think you’re covered and they’ll be there for you when you need them.

But you have no way of knowing if they’ll really be there for you when you need them because you’ve never used the service in a real health crisis.

Posted by Copernicus at 5:33 AM

Wow! Awesome and informative information, thank you, Phil! I shared this with many others who, like Jerry and I, just signed us up last year through a retirement “new insurance plan” and it has been a nightmare! Your thorough and investigative research and information here exceeds what one can find out from anyone or anywhere else that I know of. I have also shared this on social media and printed it out for many friends and family who don’t have computers. Kudos and much gratitude for your time on this piece and especially for sharing it.

Very happy that you found this info useful, Jo!