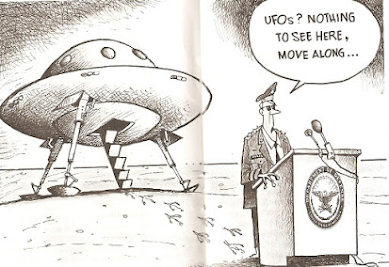 "Government officials” we are told,  “believe that surveillance operations by foreign powers and weather balloons or other airborne clutter explain most recent incidents of unidentified aerial phenomenon — government-speak for UFOs — as well as many episodes in past years.”

This according to the latest news (NY Times) about whitewashing the UAP-UFO reports of trained military pilots (Many military UFO reports are foreign spying, airborne trash)  by Julian E. Barnes.

The sightings, we are informed:

"have puzzled the Pentagon and intelligence agencies for years, fueling theories about visiting space aliens and spying by a hostile nation using advanced technology. But government officials say many of the incidents have far more ordinary explanations."

Oh really? How so? How exactly did these "ordinary explanations" get incepted and created?  What was the process and what exact data support it?  Recall the original document looked at 144 incidents from 2004 to 2021 that were reported by U.S. government sources, mostly military personnel, and none could be properly explained.  We are told that on Monday we will finally get the lowdown, but I ain't holding my breath.  Barnes' piece also notes:

"Some of the incidents have been attributed to Chinese surveillance — with relatively ordinary drone technology — and others are thought to be connected to Beijing. China, which has stolen plans for advanced fighter planes, wants to learn more about how the United States trains its military pilots, according to American officials."

Which is a load of horse pockey. As I noted in an earlier (July 18) post, neither the Russians or Chinese possess the advanced technology to explain the dynamical behavior the Nazy pilots recorded,  e.g.

The U.S  military also is not advanced to the point of having such craft either. Look, the U.S. military can't even produce a B-2 Stealth bomber that doesn't lose evasion capability in the rain for god's sake.  Rain - according to one report - distorts the 'skin' of thermoplastics and composites- causing the plane to lose much of its ability to evade enemy radar.

We are basically in the same position as Neanderthals trying to make sense of an F-117 fighter craft, e.g.

Perhaps the best explanation for all this recent moronic pseudo debunking and whitewashing of the UAP -UFO reports was provided in a paper published some years ago in the journal Political Theory by Alexander Wendt and Raymond Duvall, viz.

Herein they note the phenomenon of the UFO tends to be rejected as real because it comes up against the human concept of state sovereignty. Prof. Daniel W. Dresner, in an article appearing in The Sunday Denver Post on June 2, 2019, put it this way:

'UFOs have never been systematically investigated by science or the state, because it is assumed to be known that none are extraterrestrial. Yet in fact this is not known, which makes the UFO taboo puzzling given the ET possibility.  The puzzle is explained by the functional imperatives of anthropocentric sovereignty, which cannot decide a UFO  exception to anthropocentrism  while preserving the ability to make such a decision. The UFO can be known only by not asking what it is."

Hold that thought: a "UFO exception to anthropocentrism"  - in other words, an entity regarded seriously as an exception to human superiority. Hence, the real reason UFOs have been dismissed or treated as unworthy of serious human attention is because of the existential challenge they pose to a species that fancies itself the lords of creation - as well as the most technologically advanced life form.  In effect, to admit the reality of the UFO as an alien craft would directly challenge this comforting codswallop, engendering enormous cosmic uncertainty and rejection of the fake techno superiority meme.

This is also exactly why "stigmas"  arise associated with UFO research or claims/admissions of their reality.  In a word, those  skeptical responses amount to an elaborate defense mechanism for egocentric humans, who would otherwise have to fess up that they're second rate at least in technological terms.  We see this even in the released  report from June, 2021, e.g.

"Our analysis of the data supports the construct that if and when individual UAP incidents are resolved they will fall into one of five potential explanatory categories: airborne clutter, natural atmospheric phenomena, USG or U.S. industry developmental programs, foreign adversary systems, and a catchall “other” bin. UAP clearly pose a safety of flight issue and may pose a challenge to U.S. national security."

The five categories "construct"   is again,  a lot of hooey- mental fluff and piffle designed to distract from serious inquiry.  There are not any "five  categories" only one real one that's directly associated with those UAP  "beyond U.S. or its adversaries technological capabilities" described at the outset.  These form the very core of the UAP which point to an alien origin, without the need to drag in gigabytes of bunkum and artificially massaged mundane window dressing.

While so-called government and intel "experts" supposedly continue to check sensors for "flaws" to explain the extraordinary dynamical behavior and come up with prosaic piffle like “airport trash” and drones, they give away their game as one of dodge and distract.

Why? Because humans would prefer to overthink, invent outlandish pseudo "mundane" tripe and "explanations" - making excuses rather than admitting we're not at the top of the cosmic food chain we had supposed. In the words of Prof. Dresner:

"The UFO can be known only by not asking what it is."

In other words, dodge the reality by covering it in bunkum,  techno babble and bland, middle mind tropes and memes. Or to quote astronomer Chris Impey:  "This is still mostly an area where scientists fear to tread."

Well, you can now add high end public officials, most of the corporate media and the military too.  In the meantime it's best to remember the words of one of the most beloved literary sleuths:  "When you've eliminated everything else whatever remains - however unlikely - must be the answer."

Here’s the main takeaway that ought to make you consider this latest official codswallop (to explain away) is a desperate effort at a whitewash, not unlike the Warren Commission farce:

“Much of the information about the unidentified phenomena remains classified. Although Congress has been briefed on some of the conclusions about foreign surveillance, Pentagon officials have kept most of the work secret.”

Why? I give readers three guesses, the first two don’t count.

Even if You Think Discussing Aliens Is Ridiculous, Just Hear Me Out

Transient Optical Phenomena of the Atmosphere - a Case Study