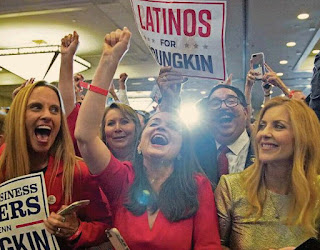 Virginia women celebrating after Youngkin win last year.  How will they feel when their rights to contraception are removed too?

A  sociological  'nuclear' bombshell went off yesterday evening with the leak of a 98-page  draft opinion circulated among Supreme Court justices  which indicated that a majority plan to overthrow the 1973 case Roe v. Wade that legalized abortion nationwide.  This was according to a report published Monday night in Politico.

It’s unclear if the draft represents the court’s final word on the matter. But knowing the radical Right Catholic extremists the traitor Trump succeeded in getting confirmed, i.e. Gorsuch, Kavanagh, Amy Coney-Barrett, it won't surprise if it does.  That's for those of us who've paid attention to all the radical Right's authoritarian moves.  (And whose next step, if we let them win this year and in '24, may be getting rid of contraception access as well. But too many are too fogged by inflation worries to see through to the real threats to their well being.)

The contentious  “1st Draft” of the “Opinion of the Court” involves  a case challenging Mississippi’s ban on abortion after 15 weeks, known as Dobbs v. Jackson Women’s Health Organization. Many court observers and activist progressive groups - from NARAL to Planned Parenthood - believed the SC would use the case as a 'pivot' to overturn Roe and it appears now it has.

True, the Supreme Court has yet to issue a ruling in the case, and opinions — and even justices’ votes have been known to change during the drafting process-  but that doesn't assuage the fears of those who've been following the assorted Red state moves the past 2-odd years, from Texas to Oklahoma and beyond. The court is expected to rule on the current MS case before its term is up in late June or early July.

More evidence the 'writing is on the wall' for abortion rights: The draft is signed by Justice Samuel Alito, a member of the court’s 6-3 conservative majority and one of the most outspoken Catholic extremists,  who was appointed by another popular vote loser (in 2000) Gee Dumbya Bush.  According to the fulsome wording and codswallop of Alito's draft opinion:

“Roe was egregiously wrong from the start.  We hold that Roe and Casey must be overruled.  The Constitution makes no reference to abortion, and no such right is implicitly protected by any constitutional provision. ”

The Constitution was heeded you extremist Nazi nitwit!  It was the law of the land since 1973 and based on the concept of an unenumerated right, as elaborated by Prof. Garry Wills  (‘A Necessary Evil: A History Of American Distrust of Government’, Simon & Schuster, 1999), i.e.

"the unenumerated rights are all those rights not already specifically declared or described in the existing document. The Founders thereby realized and understood there could exist rights in the future they hadn’t conceived of at the time of the Constitutional Convention, and so allowed those (then) undefined rights to become realized later. In other words, the rights allotted citizens are not limited to the rights actually and specifically delineated, i.e. in the Bill of Rights."

The recognition of this dissolved once the yahoos in the damned Red states began pecking away at it, finally achieving a breakthrough in Texas, e.g.

Thanks to you Rightist SC bots who never looked askance at the Texas 'vigilante' law.  (A 'bot' being a programmed entity incapable of intellectual insight or self-awareness.)

The leaked SC draft opinion in effect states there is no Constitutional right to abortion services.  This means the only relief for women who need abortions will be to come to Blue states, like Colorado, Connecticut and others.

Colorado has long recognized legal abortion without any restrictions on when in a pregnancy one can access abortion care. Further, a Colorado legislative vote last month solidified the right to abortion as part of the state’s Constitution so no matter what the extremists on the Supreme Court do it won’t affect our laws.  But it does mean Colorado will now become an abortion sanctuary and refugee state – at least until the abortion pill RU-483 can be distributed nationwide and out of sight of the authoritarians.  This may be the only option for women to regain control of their bodies that the Court’s radical right Nazis have taken away.

Demand for abortion care is certain to increase in Colorado in a post-Roe future. Among the U.S. states with “trigger laws” to ban abortion if and when Roe v. Wade falls, many either share a border or are close to Colorado: Idaho, Wyoming, Utah, South Dakota, Oklahoma and Texas.  In the words of Colorado House Majority leader Daneya Esgar (from Pueblo)  who sponsored this year's state law:

Those of us living in the only sane remnant of the country, the Blue states, hope this capacity is available too.  If not, we need to make it to ensure women get the care they need and ability to retain control of their bodies. In the meantime, citizens must realize - inflation pain or not- they cannot cede any more power to the Reep Right with bad voting choices, i.e. out of desperation that a change will be a cure all.

Conservatives and the Right
A Third of America is Lost to Hate: Is It Time to Move On? 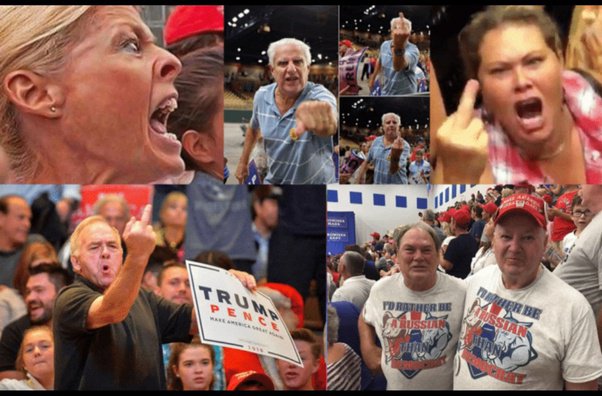