The UFO Intel Hearings - More Stonewalling From The Military Brass: "We Wish We Knew What They Were!" 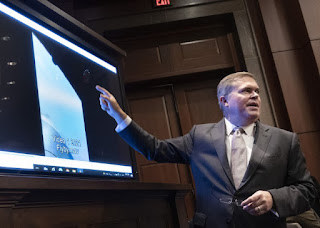 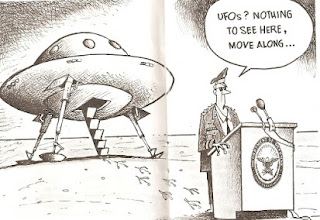 "I think in all likelihood this report will come and go, and with it the mainstream chatter around U.F.O.s, until definitive proof is exposed. A planet that can’t come together on climate change or a global pandemic might not pay much attention even if wreckage or an alien corpse is discovered." - Chris Carter, NY Times, June 26, 2021

The first UFO hearings in nearly 50 years were held  before a House Intelligence subcommittee on Tuesday but don't hold your breath waiting for any final answers. The Pentagon isn't prepared to give them. Pentagon officials did admit that there are now close to 400 reports (from military personnel) of encounters with totally unknown, metallic like objects -- a significant increase from the 144 tracked in a major report released last year by the U.S. intelligence community.

The UAP task force has five potential explanations for UAPs: airborne clutter; natural atmospheric phenomena; U.S. government or U.S. industry developmental programs; foreign adversary systems; or "other".   This  "other"  category includes all the footage from inexplicable cases that don’t fall in the other categories. That footage, which the military confirmed last year was authentic, had helped spur interest in the purported UFOs, also referred to as "unidentified aerial phenomena" or UAPs.

In other words, the obvious incidents of alien intrusion, but which will never be formally acknowledged.  Why not?  I already covered the answers in previous posts over the past three years, e.g.]

What The Pentagon Prelim UFO Report Isn't Saying: 'The Aliens Are Here, We Just Don't Want To Admit It."

Forget the other distraction categories, they were always 'fluff' to offer the classic debunkers excuses so they could sleep at night.  Those like Marco Rubio (R-FL) who suspected "secret Russian craft" that we don't know about.  Yeah, right.  This from a country that lacks the military know -how or intelligence to protect its advancing supply convoys in an opening attack on Kyiv over 2 months ago.

Anyway, let's go back to the original report from last year, a core finding of which was:

"Most of the UAP reported probably do represent physical objects given that a majority of UAP were registered across multiple sensors, to include radar, infrared, electro-optical, weapon seekers, and visual observation. In a limited number of incidents, UAP reportedly appeared to exhibit unusual flight characteristics."

And for which some subsequent qualification had been added to the mix, i.e. these objects could have also been the results of spoofing, sensor errors, or observer misperception.  For which I noted (see link above):

"The acknowledgement of the use of  multiple sensors rules out sensor errors or spoofing. It is simply damned near impossible to simultaneously rig multiple sensors to deliver abnormal findings - all of which show the same intelligent control of the craft. Thus, the appeal to "sensor errors" and 'observer misperceptions'  is merely intended as a distraction from the main point.  Much like Neal deGrasse Tyson's glitch nonsense."

Flash forward to the present and the Tuesday House panel hearing. What most caught my attention were the admissions by Scott Bray, Deputy Director of Naval Intelligence.  As when he stated clearly:

“We've seen an increasing number of unauthorized and or unidentified aircraft or objects over military control training areas and training ranges and other designated airspace.  Reports of sightings are frequent and continuous."

Well, if that doesn't get the attention of the brass and get them to stop playing "dodge the aliens" I really don't know what would.  Now true, Bray also said:

"The UAP task force doesn't have any wreckage that ... isn't consistent with being a terrestrial origin."

But even if actual alien -verified craft were found it is doubtful it would alter the denial of earthlings that these are actually devices, craft of extraterrestrial origin.  Which theme I will get to in a bit.  Bray also believes many of these are "narrative based" meaning they represent reports of prior incidents from people only now coming forward. But that doesn't minimize the import, it just means the military needs to further de-stigmatize such reporting, as it is not in our national interest.

At this point, the input of Ronald Moultrie - the Pentagon's top intelligence official was pertinent, as he said:

"We also understand that there has been a cultural stigma surrounding UAP.  Our goal is to eliminate the stigma by fully incorporating our operators and mission personnel into a standardized data gathering process."

Adding that the Pentagon wants to establish an office "to speed up the identification of previously unknown or unidentified objects".  Well, it's about damned time.  But in the next breath, Moultrie asserted, to a slew of eyes wide open:

Yeah, but see, I am certain he and the other Pentagon brass already know, they just aren't committed to telling the hoi polloi.  Well, maybe with good reason. I mean if you think the QAnon conspiracy ideations about Dems cannibalizing infants for Satan are batshit nuts, try googling about their beliefs the Dems, and liberals, are "lizard people" from an alien planet.  Talk about "replacement theory" on steroids, this is it.

But seriously, I reckon that denial will be part of the landscape of these UAP or UFOs for some time.  The reasons for the obsessive and irrational denial are centered in the human belief that we are the 'lords' of creation. Competing civilizations - so long as they remain mythical or relegated to sci-fi stories - are tolerable.  Indeed, after the hearing Tuesday Moultrie conceded he wasn't "immune to the UFO zeal himself" as a science fiction fan.

But these aren't science fiction, Ronald, these things are real and they are intruding on the air space over your military and training facilities. Again, the shtick is old, play around the core concept but don't let it get too close to being real.  All of this was recounted in the research paper,

Published in the journal Political Theory some 14 years ago, and detailing the aversion of the human political and military hierarchy to accepting the truth of UAP/ UFOs as extraterrestrial realities.  The core basis of Wendt's and Duvali's thesis is simple: the phenomenon of the UFO as real tends to be rejected ab initio because it's opposed to the human concept of state sovereignty and superiority.   This was explained further by Prof. Daniel W. Dresner in an article appearing in the Denver Post, from June 2, 2019, i.e.

'UFOs have never been systematically investigated by science or the state, because it is assumed to be known that none are extraterrestrial. Yet in fact this is not known, which makes the UFO taboo puzzling given the ET possibility.  The puzzle is explained by the functional imperatives of anthropocentric sovereignty, which cannot decide a UFO  exception to anthropocentrism  while preserving the ability to make such a decision. The UFO can be known only by not asking what it is.

"UFO exception to anthropocentrism"  - in other words, presumes an entity regarded as a serious exception to human superiority. Hence, the real reason UFOs have been dismissed or treated as unworthy of serious human attention is because of their existential challenge to a species that either fancies itself: a) the sole advanced species in the cosmos and occupying one singular habitable planet, or b) If any aliens might exist they are profoundly inferior to humans and would never be able to create craft to get here. Ergo, no worries.

In effect, to admit the reality of the UFO - or in the case of the House panel Hearing - Ronald Moultrie admitting aliens are already here with these UAP intrusions - would directly challenge this neat little simpleton fantasy. A No-no.  But this is exactly why stigmas are associated with UFO research, or claims concerning their reality.  It inevitably implies a "chuckle factor" but that chuckle is really on human simpletons and egomaniacs who continue to believe they are the sole intelligent occupants of the cosmos.  The very notion we'd be seen as hairless baboons, or worse, two -legged roaches, is an affront to our illusion of cosmic superiority.

"Experts" supposedly continue to check multiple sensors for "flaws" to explain the extraordinary dynamical behavior of UAP,  but are actually trying to explain them away as alien craft. Indeed, one clown, Mike West  - actually admitted that alien craft did form  the simplest hypothesis.  But he still has sought to invoke "infrared glare" to account for certain rapid spin motions of UAP showing up on many of the military videos.  Why? Because too many prefer to overthink and concoct outlandish mundane explanations than simply admit humans are not at the top of the cosmic food chain.   Applying Occam's Razor in tandem with the evidence shown at the hearing would resolve the mystery but don't wait for military officialdom to act on it.

"I am encouraged by the public desire to know and find out the truth of what UFOs represent to humankind.  It's the biggest story of our time. And finally we're beginning to have the conversation without ridicule and stigma that has so injured the search for scientific truth on this topic."

Maybe, but until the brass and segments of the political class get rid of their human egocentric hangups, we will not move to the point of formal acceptance.  In the meantime, I suspect my recently published letter in the April/ May Mensa Bulletin, p. 12, at least has more members considering the reality given they've seen I come down on the side of the extraterrestrial hypothesis. (The letter was actually a response to another member Joe Hrbek; Brainwaves, February Bulletin)  who invited any other members to provide a UFO perspective different from his.  I did, giving my own UFO observation from March, 1962, also recounted in this 2008 blog post:

And note my hypothesis has since changed in the intervening 14 years from that last post, from fully unidentified to extraterrestrial origin.) I also provided a link in the letter to my own investigation of a UFO report - by a founder member of the Barbados Astronomical Society - published in a peer-reviewed astronomical journal,  i.e.

As well as a link to a Berkeley -SETI site where none other than Carl Sagan is captured having finally admitted the reality of the UFO phenomenon, e.g.