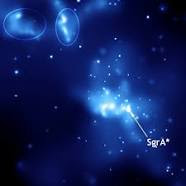 Brace yourselves for a potentially exciting revelation early tomorrow morning, concerning the  Sagittarius A radio source and a super massive black hole nearby.   The Event Horizon Telescope project is set to unveil what it calls "ground breaking Milky Way results" tomorrow, May 12. Though details are scant about exactly what will be revealed, there's a strong possibility astronomers have been able to obtain an image of the supermassive black hole at the center of the Milky Way for the first time.  The results will be presented during a press conference at 9 a.m. EDT and also will be livestreamed on the US National Science Foundation website,

Recall  back in April 2019, the EHT collaboration unveiled the very first image of a different black hole, the supermassive entity at the center of the Messier 87 galaxy, dubbed M87*.  Then the Event Horizon Telescope was able to generate an image by using eight radio telescopes from across the planet. Synchronizing these instruments helped produce an image, i.e.

which was called a "black hole", but which I noted in a post at the time:

Don't Be Deceived: There Is No Such Thing As A Photo Of A "Black Hole"

Was actually the event horizon of such. Not the actual black hole, which by its very definition cannot be seen given no light can escape its gravity.  As I wrote:

" One cannot get a photo or other image of a black hole itself.  That is invisible - or better "un-seeable" - at any wavelength, including radio..   What one has in the image, is not the black hole per se, but its event horizon which is somewhat different.....What is this event horizon? It is basically an "infinite redshift" surface from which no signal, no light or radiation of any kind, can escape. The key cut off occurs at what's called the Schwarzschild radius or:

R(s) = 2GM/c2
where G is the Newtonian gravitational constant, c is the speed of light in vacuo, and M is the gravitating mass.   In this case - and for a "Schwarzschild solution" all observers will agree that the surface r = R(s) is an "event horizon".  It defines the boundary or edge at which all outgoing signals are cut off so they cannot have any external manifestation - whether as radio waves or optical ones. "

Though the image looks a little like an out-of-focus campfire, don't be fooled.  You are not seeing the actual black hole but instead the effect of surrounding material, gases sucked into the event horizon and interacting with extreme collisions.  It is these collisions which create the visible radiation detected as the 'glow'. Still it was a breakthrough result: The first time humans had set proximate eyes on the universe's most fascinating and confounding objects. Further work revealed the extreme magnetic fields associated with M87*, then allowed astrophysicists to further understand the environment around the black hole.

But the EHT wasn't studying just M87*. The suite of  radio telescopes that comprised the assembly had also been focused on the supermassive black hole at the center of the Milky Way known as Sagittarius A*, or Sgr A*. This black hole is about 4.3 million times more massive than the Sun and sits just 25,000 light-years from Earth -- close, in cosmic terms. For comparison, M87* is about 6 billion times more massive and about 50 million light-years from Earth.

Imaging Sgr A* is much harder than M87* because there's a lot more stuff - intervening cosmic gas and dust -- that interferes with radio telescopes when looking toward the heart of our home galaxy. That's why it was "easier" to get a photo of the  M87*  event horizon first.

But again we need to take a step back: heralding a result with a kind of bated breath and ramping up expectations usually suggests something big is coming. But that can also prefigure a potential letdown.  The risk of any hype-   which I don't intend to exploit irrespective of the numbers of clicks or eyeballs -  is that of too high expectations being throttled. This is possible given we are seeing the same playbook unfold as in the collaboration for announcing the results of M87*.

To be clear from the outset, press releases from the EHT collaboration have not suggested we're going to get a new black hole photo, or behold a one of a kind entity. They're merely calling this a "ground breaking discovery in the Milky Way".   But given the history of the EHT, it's hard to imagine what else this could be.  Still, I am not expecting anything earth-shattering and neither should Brane space readers, followers.

I realize that this makes it hard to say exactly what the "groundbreaking result" tomorrow morning will be, but one thing I won't do is over promise and under deliver.  My personal bet would be a second image of a black hole event horizon - and the first image of our home galaxy's cosmic behemoth.   Meanwhile, my niece Shayl's friends on Twitter seem to agree that almost everyone believes this will be an image of our galaxy's dark heart.  But to quote the words of one CNET contributor:

"So, astronomers, I'm begging you: Just tell us there's a great photo of the Sgr A* coming. Tell us we will be able to see the Milky Way's supermassive black hole on May 12. We've put two and two together! This isn't a Marvel movie! You don't have to give us this post-credits scene to tease us about the sequel. We know what you're up to and we're buying tickets to the show anyway."

But if it isn't another black hole image, then what?  Well it will be up to the EHT crew to fill us in and let us know if their radio telescopes have found something else that warranted such expectations, foreshadowing.   For my part I am keeping cool and expectations low until I actually see what's on offer Thursday morning.