Can Four-Dimensional Physics Really Be Simulated In A Laboratory?

"What would the universe be like if it had four spatial dimensions instead of three? Experimentalists are starting to explore the physics of higher dimensions with the help of recently developed tricks that synthetically mimic an extra fourth dimension in platforms such as ultracold atoms, photonics, acoustics, and even classical electric circuits. Although any such trick necessarily has limitations, as the fourth spatial dimension is always artificial, those approaches have proven that they can simulate some four-dimensional effects in controlled experimental systems."

In nonrelativistic physics, in which space (x,y,z) and time (t) are distinct, a spatial dimension is simply a direction along which objects can move both forward and backward, e.g. such as depicted in this 3 D reference frame: 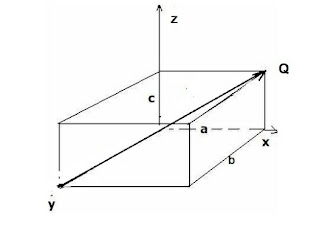 This is unlike time, which always flows from past to future. The number of relevant spatial dimensions in a system is defined by the directions along which spatial motion can take place or, alternatively, the number of spatial coordinates—for example, (x, y, z)—that must be specified to define where an object is at a particular moment in time, e.g. 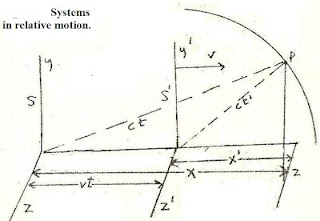 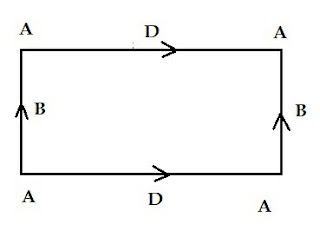 If one were now to fold over the left and right sides so they join, ABA-left to ABA-right, s/he would be well on the way to re-forming the torus. Taping the two sides together, for example, would form a cylinder or straight tube. To complete the process, one simply joins the oppositely situated circles, ADA-top to ADA-bottom.
Arrows are used to define consistent directions, and either numbers or Greek letters can be assigned to the box sides. This is for ease of identification of the particular equivalence classes.  For example, arrows assigned to segments AB and BA on both sides of the shape shown above are made to point in the same direction, say top to bottom. The same direction implies two sides have to blend together when connected. A similar consideration applies to the bottom ends (AD + DA) when joined. So that the arrow from A to D on top would match an arrow direction from A to D on the bottom.
Thus, for the ‘top’ side of the torus:
A ---->-----D ----->------ A
and, for the ‘bottom’ side:
A ---->-----D -----> ------ A 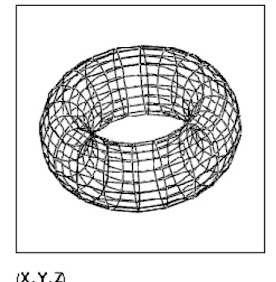 belongs to the family of surfaces with one hole, so in topology we assign it an index or genus of 1.  On the other hand, this sphere which I also created with Mathcad, 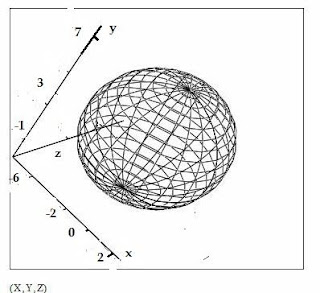 belongs to the topological family with no holes, and hence genus 0. If one were to take this sphere - say as a material 'putty' or clay and smoothly squish it he will see its shape deform.  But all the squishing applied will not change it into the shape of a donut.  That is, unless applies enough strain to tear a new hole - thereby changing the topology, and the genus. Other kinds of topological indices are also used such as the Chern number.
In physics, topological indices can manifest in electrical, optical, and other behaviors. such as the electronic energy bands in a crystal. Those indices - when non-trivial  = ensure special properties, such as "edge currents", i.e.  currents circulating around the edge of a material despite the bulk remaining insulating, or what we call a "topological insulator." By analogy to my earlier squishing a sphere of putty or hard clay,  these indices are hard to change, and so are topological properties.
The 2D quantum Hall effect is intrinsically a 2D phenomenon, first observed in an effectively 2D electron gas moving in a high-quality semiconductor.  In a seminal experiment by von Klitzing, he exposed a silicon-based heterostructure to low temperatures and high out-of-plane magnetic  (B- )  After a current (I)  was passed through the device and measured the Hall voltage ( V H ) across it could be obtained to find the Hall conductance  . i.e.
s xy   =  I /  V H  =   e 2   n /  h
Where   h is the Planck constant and  n  is the "filling factor"  e.g.

Defined as the ratio of states between a 2D electron gas, e.g.  2DEG , and the density of states associated with the Landau levels, e.g.

Note that while n can assume integer values, theoretically, in general it won't. That case exclusively arises when there is an exact number of filled Landau levels.  By contrast fractional values are assumed when the top level is not fully occupied. Since by increasing the magnetic field B,   n B  ~   B,  the Landau levels increase in energy and the number of states in each level grow.  Thereby fewer and fewer electrons occupy the top level until it becomes empty. If the magnetic field keeps increasing, eventually, all electrons will be in the lowest Landau level  ( n<< 1 )  which is called the magnetic quantum limit.
To be sure, what von Klitzing found was unexpected: The conductance  (s xy) exhibited well-defined plateaus that were precisely quantized by integer multiples of   e 2   In fact, that quantization was so precise that it became part of the 2019 re-definition of the kilogram in SI units. (See the article by Wolfgang Ketterle and Alan Jamison, Physics Today, May 2020, page 32.)
As Price observes, that realization was partly why David J. Thouless: was awarded a share of the 2016 Nobel Prize in Physics. The integer in the Hall conductance is related to the 2D topological index called the first Chern number, which guarantees the existence of topological currents around the edge of the material, e.g. 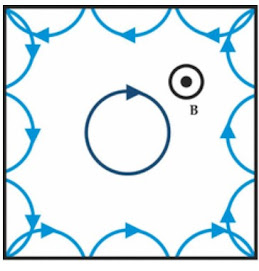 Where B denotes the B-field out of the page. Note the circular center (clockwise) ring which denotes a closed, circular cyclotron orbit in the bulk material. This is incepted classically when a charged particle is subjected to an out of plane magnetic field. Now, the topological currents around the edge - called "skipping currents" - are also induced and continue moving in the direction dictated by the B-field.  Quantum mechanically the behavior translates to the characteristic bulk energy bands and conducting edge state of a topological insulator.   In other words, a 2D quantum Hall system is an example of what would now be called a topological insulator, with the strong Hall conductance being one of its key experimental signatures.
After the discovery of the 2D quantum Hall effect, theorists suggested that certain 3D materials would also have bands characterized by first Chern numbers, except in that case a triad of them: one for each of the three Cartesian planes of the 3D material (ibid..). By 2019 the theorized 3D quantum Hall effect was indeed observed in bulk zirconium penta-telluride crystals. But the 3D quantum Hall effect is what’s often referred to as a "weak topological phenomenon"  because key properties, such as the first Chern numbers, remain essentially 2D concepts even though the system is 3D.
In four spatial dimensions, however, a fundamentally different type of quantum Hall effect was proposed in the early 2000s.3 This 4D quantum Hall effect featured a different form of quantized Hall conductance from its 2D cousin and was instead related to a 4D topological invariant called the second Chern number, which generates 3D conducting surface volumes, as shown below:

As Price notes (op. cit., p. 40), there have been various 4D quantum Hall models  proposed to date.  Some based on earlier Yang-Mills theory.  But it is a mistake to push the analogy of the mathematical hyper-dimensionality to the physics 4D topology too far.  In the end, theoretical (purely mathematical) excursions without experimental confirmation or employing "tricks" (e.g. synthetic dimensions)  to create 4D analogs, is not really going to get us far.  Even Price admits this esoteric area of physics is "still in its infancy" and that usually means we will have to wait and see if the experimental infrastructure and other resources can catch up to the 4 dimensional  aspirations.  Meanwhile it is still nice to see that at least some claims are empirically validated, if only in very limited domains. .
Posted by Copernicus at 6:59 AM